Superdeep #8 – Ukraine, Russia, and the Use of Force in International Law

Reported by Hantian Zhang (Class of 2025) 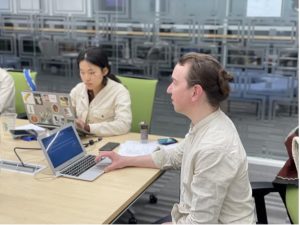 In light of a couple of sources of the law regarding use of force, the primary things to attend to were two aspects of the laws– ius ad bellum (right to armed conflict) and ius in bello (laws of armed conflict).

First, ius ad bellum (right to armed conflict) refers to determining the nature and rightfulness of a given conflict. The purpose of this includes pursuing peace and collective security and defending equal rights and self-determination. With several examples in history, Professor Hauthaler also introduced a series of principles regarding the right to armed conflict. Russian actions are regarded as large-scale military operation that not only interfere with domestic affairs of Ukraine but also contradict the will of Ukraine. In terms of this issue, Professor Hauthaler raised a question: are Russian actions permitted under international law? According to United Nations (UN) Charter that overwhelms majority consensus opinion, there are only two exceptions to the prohibition on the use of force in international society. To provide the possibly affirmative answer, two Charter grounds should be involved in the support. The first one is collective security that requires UN Security Council resolutions and authorization. With the general sense of terms, Professor Hauthaler led the audience to encounter them in a more technical sense. It was not viable given the Security Council’s nature and procedure because the five permanent members in the Security Council are equipped with a veto power. In a conflict concerning a permanent member or one of its protected bodies, it is unlikely to see the Security Council act in the way required by the Charter, which has been a constant issue.

The other one is called “self-defense” in Article 51 and requires occurrence of military attack. When the occurrence of a military attack is likely approaching, the consensus is that self-defense can only be exercised in response to an actual attack. For the first alternative, if Russia acts as self-defense, it would require relevant armed attack in Russia and necessary response by Russia, which raises a question whether either occurred. The second alternative is related to Donetsk, Luhansk People’s Republics whose recognition made headline news several days ago – their recognition and status under international law to be subject to the right to self-defense in Article 51 is a matter of dispute, which is a significant issue. These republics proclaimed themselves independent in 2014. Though they have not been recognized by everyone in the world, they were recognized by Russia. The complex and muddy issue is that how their declaration of independence happened and who supported them. In addition to classifying a military operation as serving collective security and self defense which is sanctioned by the chapter seven, the UN General Assembly can classify it as “act of aggression” which is unconditionally ruled out. Professor Hauthaler concluded that the lawful responses to acts of aggression consist of collective security, self-defense and other means such as sanctions.

Second, ius in bello (laws of armed conflict) refers to determining the rightful conduct in conflict. In this section, professor Hauthaler introduced international humanitarian law that includes rules governing the lawful conduct of armed conflict among combatants and towards non-combatants. When it comes to key treaties, the first is Hague Conventions, an old document regarding means of armed conduct. It involves governing means and methods of the conduct and most importantly, rules out various forms of weapon. In terms of nature, since biological, chemical and even nuclear weapons are indiscriminate, they are not allowed to make mistakes. Aside from that, articles in the Geneva Conventions and three additional protocols distinguish standards towards different categories of people. Last but not least, Prof. Hauthaler provided several key principles that he suggested to be reflected on. As mentioned before, the distinction of combatants versus non-combatants is broadly construed in the Geneva Convention. To achieve the proportionality, legality of military action is transformed into a function of balancing objectives, methods and consequences. Instead of a principle of humanitarian law, reciprocity cannot allow the conduct of one party to be adapted in another party.

At the end of the talk, there was an inspiring discussion between professor and participants. The Superdeep event provided the audience with the basic legal background of the conflict between Ukraine and Russia and thus with a deeper insight of international affairs.