The Health Humanities Lab luncheon is a status update on all of the current projects sponsored by the HHL. Each team will present their work and it will be recorded over Zoom so that other groups interested in the new call for proposals will have the opportunity to learn from the examples of successful project proposals. 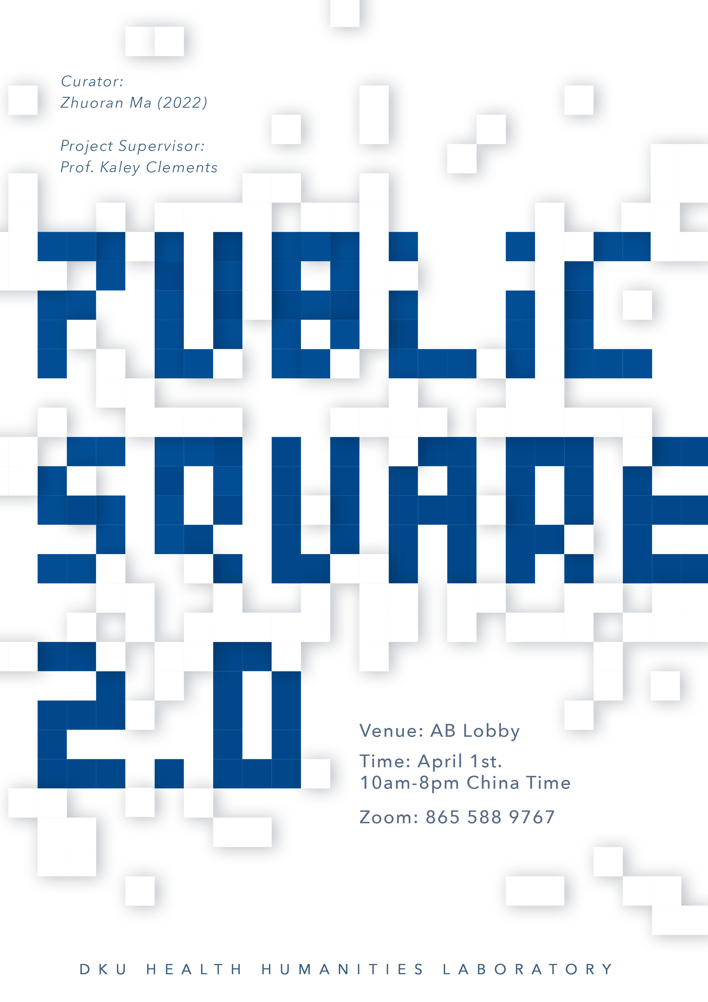 Public Square 2.0 is a video-based multi-screen installation about people’s interactions within public space, as a reflection of people’s relationships within a community in Beijing in the COVID-19 context. The videos screened within are documentations of human interactions in a community in Beijing during the COVID-19 outbreak from March to August in 2020. Each video highlights different parts of a communal square, documenting individuals and their daily activities within it at different times.

When it comes to the DKU community, for students, staff and faculty abroad, most of them are still unable to return to campus due to the pandemic. The installation is located in the AB lobby and with a MaxHub whiteboard that allows for real-time interactions through Zoom to connect the entire DKU community during the ongoing pandemic.

The pandemic has affected people’s lives all around the world. Even now, people’s outdoor activities are more or less restricted. And for some, the access to face-to-face interactions is still difficult. Within this context, this project wants to explore how we can increase interactions and strengthen bonds in the DKU community. What roles can communal space play in this process? How can we, as a community, support each other, and tell each other that we will face the challenges together?

For people online, you are greatly welcomed to join the exhibition virtually. Please feel free to interact with people on campus and annotate on the virtual whiteboard to share your feelings and thoughts. 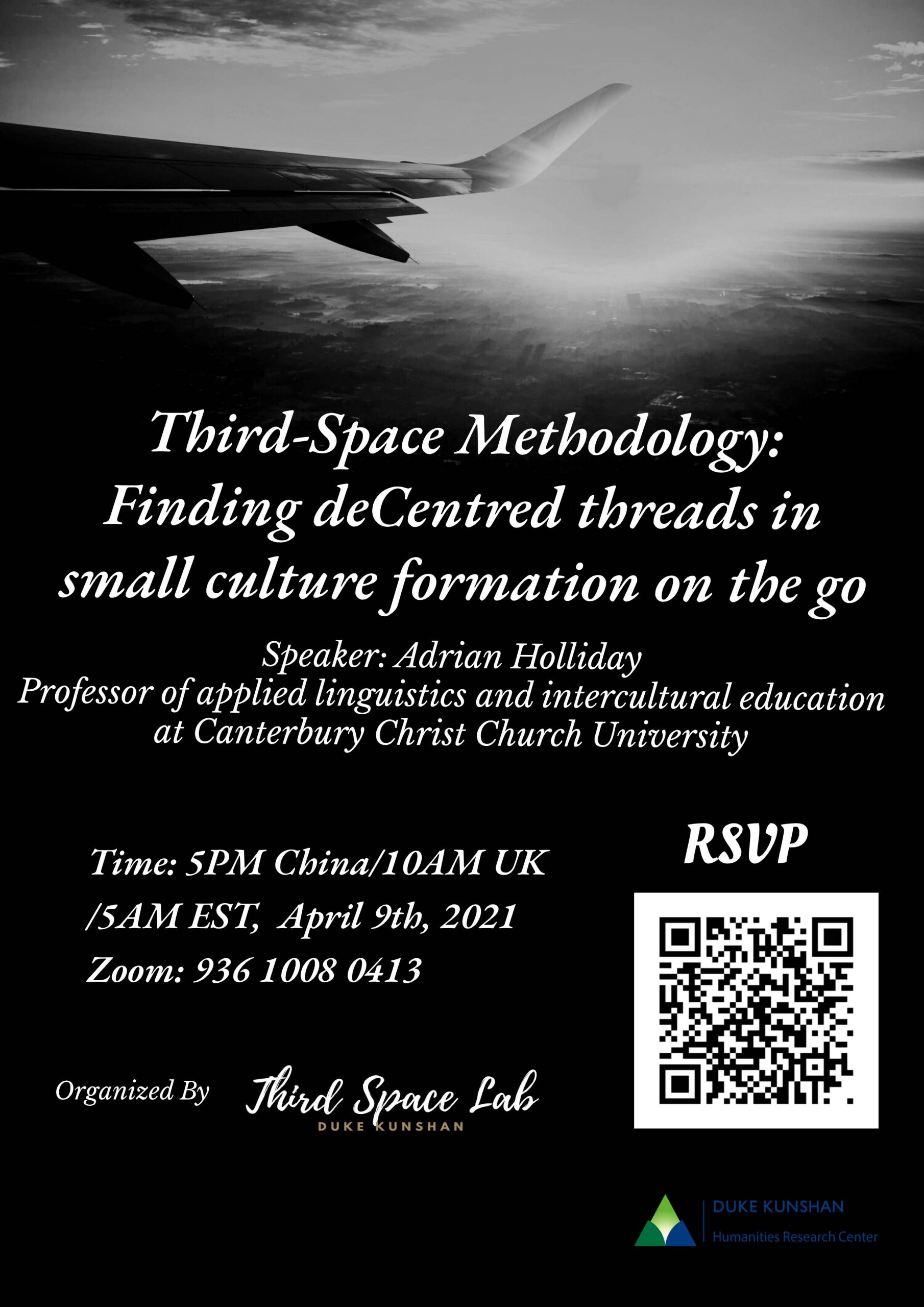 You are cordially invited to the guest lecture of the Third Space Lab by Dr. Adrian Holliday (Canterbury Christ Church University). We hope you will join us!
Please RSVP here: https://duke.qualtrics.com/jfe/form/SV_dbs44bUulnr63NY

The biggest barrier to intercultural travel is its framing as between large, national or civilisational ‘cultures’. This framing falsely claims, for example, that (a) Western and Eastern people are essentially different to each other because their behaviour and values are determined by these separate large ‘cultures’, and that (b) learning a second language requires the native-speakerist activity of learning a second large ‘culture’. This large-culture approach originates from a racist, structural-function­al­­ist, Orientalist, Centre, Western grand narrative that falsely separates the world into superior individualist and inferior collectivist ‘cultures’. It therefore creates essentialist blocks that pull us apart.
Intercultural travel instead requires deCentred threads. This is not learning the ‘other culture’. Although we are brought up differently in our national systems, with different histories, practices and architectures, we share everyday, common, hybrid, underlying, intercultural experience ‘on the go’ such as going to school for the first time, visiting friends’ families, and joining new work and leisure groups. This existing underlying intercultural competence needs to be recalled as the best resource for engaging with more distant intercultural realities. However, ‘us’-‘them’ prejudice is everywhere and makes us vulnerable to blocking large-culture grand narratives. Third-space methodology is the hard and uncomfortable, intersubjective work of rooting out and putting aside prejudice in a new, deCentred, decolonising, thinking-as-usual. We can then see culture as creative, flowing, changing, hybrid, boundary dissolving and figurative, rather than confining and separating. 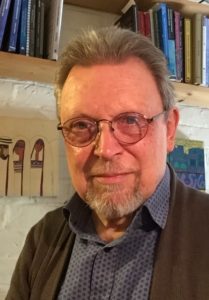 Adrian Holliday is a professor of applied linguistics and intercultural education at Canterbury Christ Church University. After completing his Bachelor’s in sociology in 1971 and beginning his career as a teacher of English, History, Economics and Sociology in London, he embarked on a six-year international experience as an English teacher and then English program manager in Iran, from 1973 to 1979. After returning to the UK and completing a masters degree at Lancaster University, from 1980-1985, he was involved in setting up the English for Special Purposes Centre at Damascus University in Syria. This is now the successful Higher Languages Institute. Then, in 1985-1990, Professor Holliday was involved in a national university curriculum project in Egypt which comprised 18 universities across the country. The experiences during this project provided him material for his Ph.D. at Lancaster University, which he received in 1990. He headed the Graduate School at Canterbury Christ Church University from 2002-2017, providing academic management for research degrees, and was a program director for the Ph.D.s in Applied Linguistics and in Education. He also chaired the  British Association of TESOL Qualifying Institutions and helped set up the British Institute of English Language Teaching. Throughout his career, he has been developing his thinking and writing around the relationship between the individual, culture and social structures. His long-standing relationship with Iran and the Middle East has provided him with an awareness of the global politics which surround these relationships.

This event will be recorded and posted on the Third Space Lab’s Sakai site for all to view.

In the past year, members of Asian descent have been the targets of hate crimes and other forms of systemic violence. These acts, particularly those that have taken place across the U.S., Canada, the U.K. and Europe, have, for the most part, singled out the most vulnerable members of Asian communities, including the elderly, the working-class, and women. Most recently, the mass murders of 8 people in Atlanta, Georgia on March 16, 2021, six of whom are Asian women laboring in the massage parlor industry, have ignited a wave of social movements calling for the end of intersectional racism, misogyny, and discrimination against those who are engaged in sex work, along those who labor in beauty, nail, and massage parlors. What is the significance of this event, particularly for those in the Asian-American Pacific Islander (AAPI) community in the U.S.? What debates around race, gender, and labor have proliferated around the U.S. and the world since the shootings? How can the histories and experiences of migration, labor, and activism among Asian immigrants and their allies cast new light on building cross-cultural ties between Asia, China, and their diasporic groups in the Global South (Africa, Southeast Asia, Latin America)? END_OF_DOCUMENT_TOKEN_TO_BE_REPLACED

The Humanities Research Center is pleased to announce a call for proposals for Spring 2021, to be completed by August 31, 2021. Applications are due via email to Chi Zhang by April 15, 2021, except for the writing retreat, for which application is via Qualtrics form. A separate funding round will take place for the fall. END_OF_DOCUMENT_TOKEN_TO_BE_REPLACED 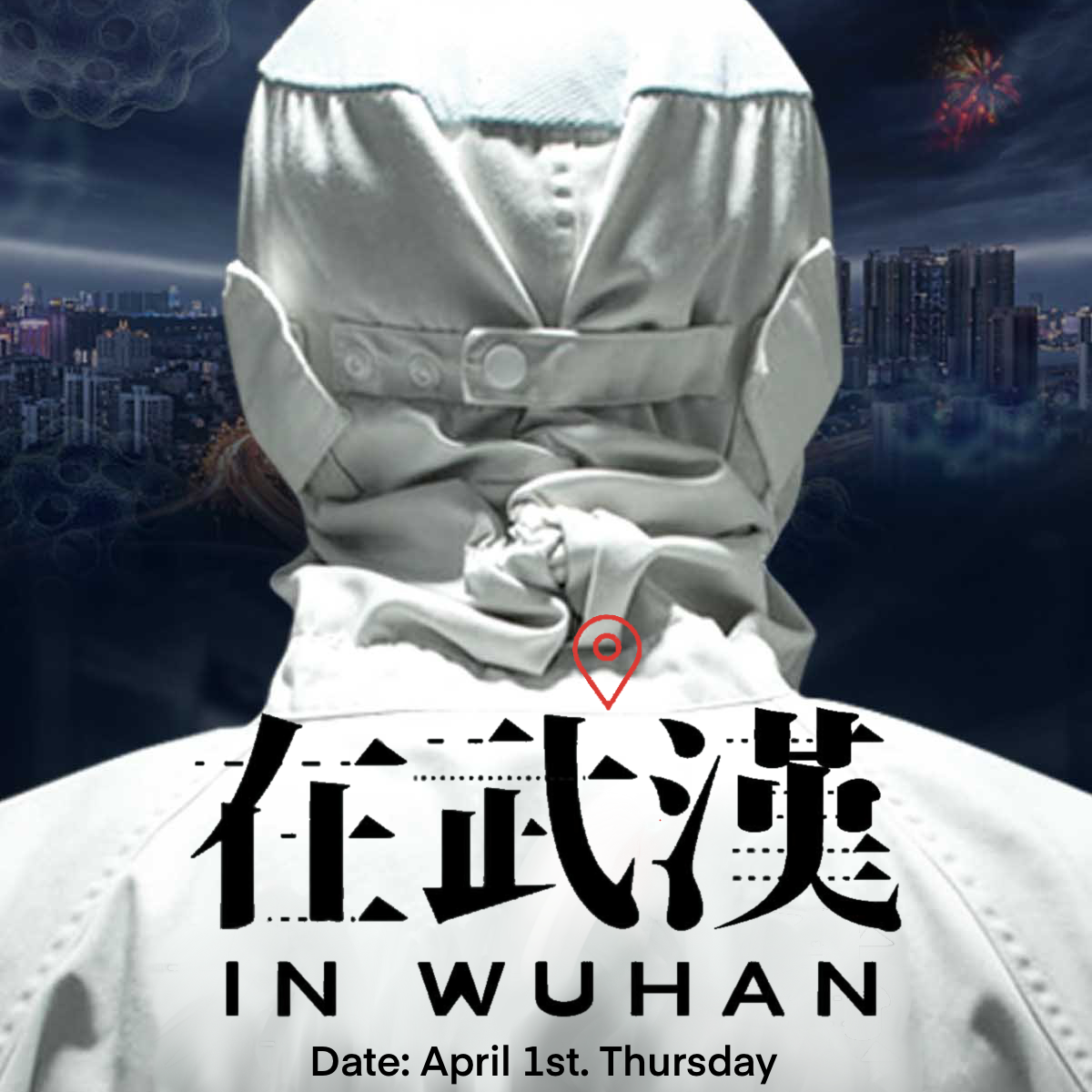 In Wuhan is a documentary that reveals the scene inside Wuhan during the earliest days of the pandemic. The film is a deep dive into the many logistical and humanitarian concerns involved in locking down and quarantining a city of 11 million people overnight. Please join us in watching the film followed by a in person Q&A with the filmmaker (Zhang Yue) who was in Wuhan during the citywide lockdown. 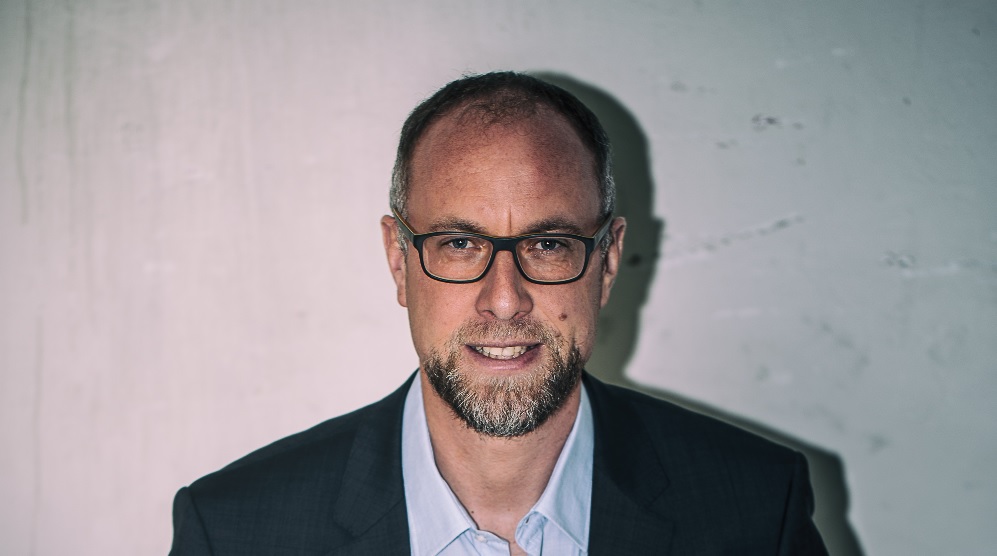 Ruiheng Xu and Daniel Lim, a student and faculty member at Duke Kunshan University, interview Mark Coeckelbergh, Professor of Philosophy of Media and Technology at the University of Vienna, on his new book, AI Ethics (2020 – MIT Press). 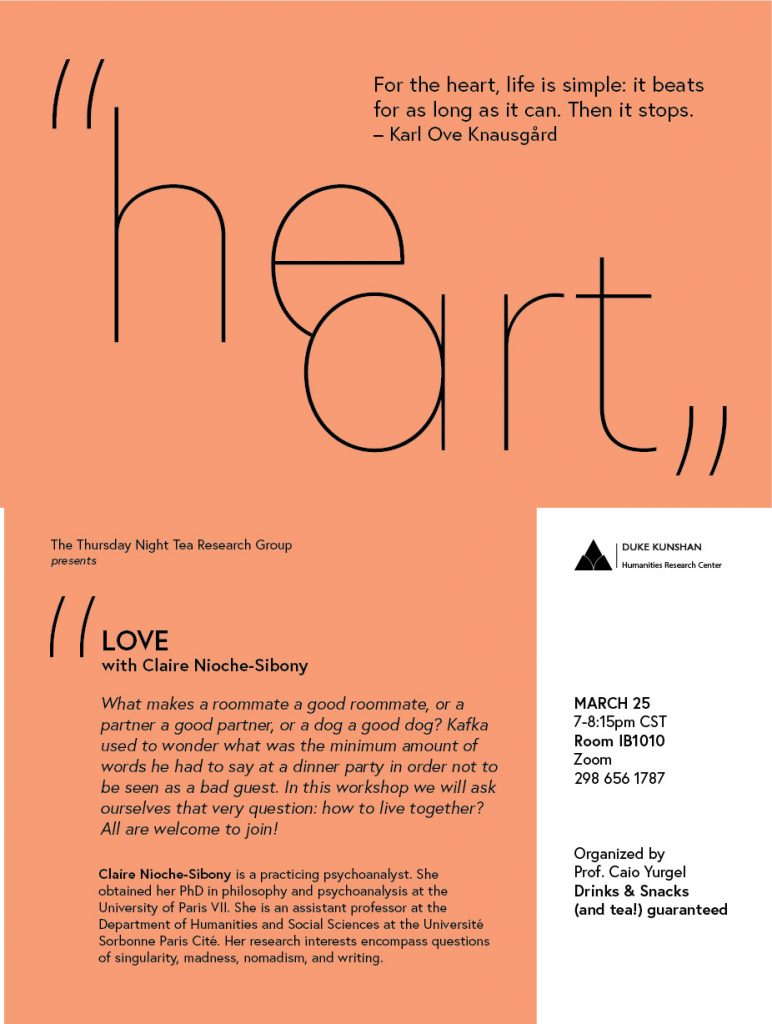 What makes a roommate a good roommate, or a partner a good partner, or a dog a good dog? Kafka used to wonder what was the minimum amount of words he had to say at any given dinner party in order not to be seen as a bad guest. In the third event of our series on Intimacy, psychoanalyst Claire Nioche-Sibony will guide us through that very question: how to live together?

Claire Nioche-Sibony is a practicing psychoanalyst. She obtained her PhD in philosophy and psychoanalysis at the University of Paris VII. She is an assistant professor at the Department of Humanities and Social Sciences at the Université Sorbonne Paris Cité. Her research interests encompass questions of singularity, madness, nomadism, and writing. 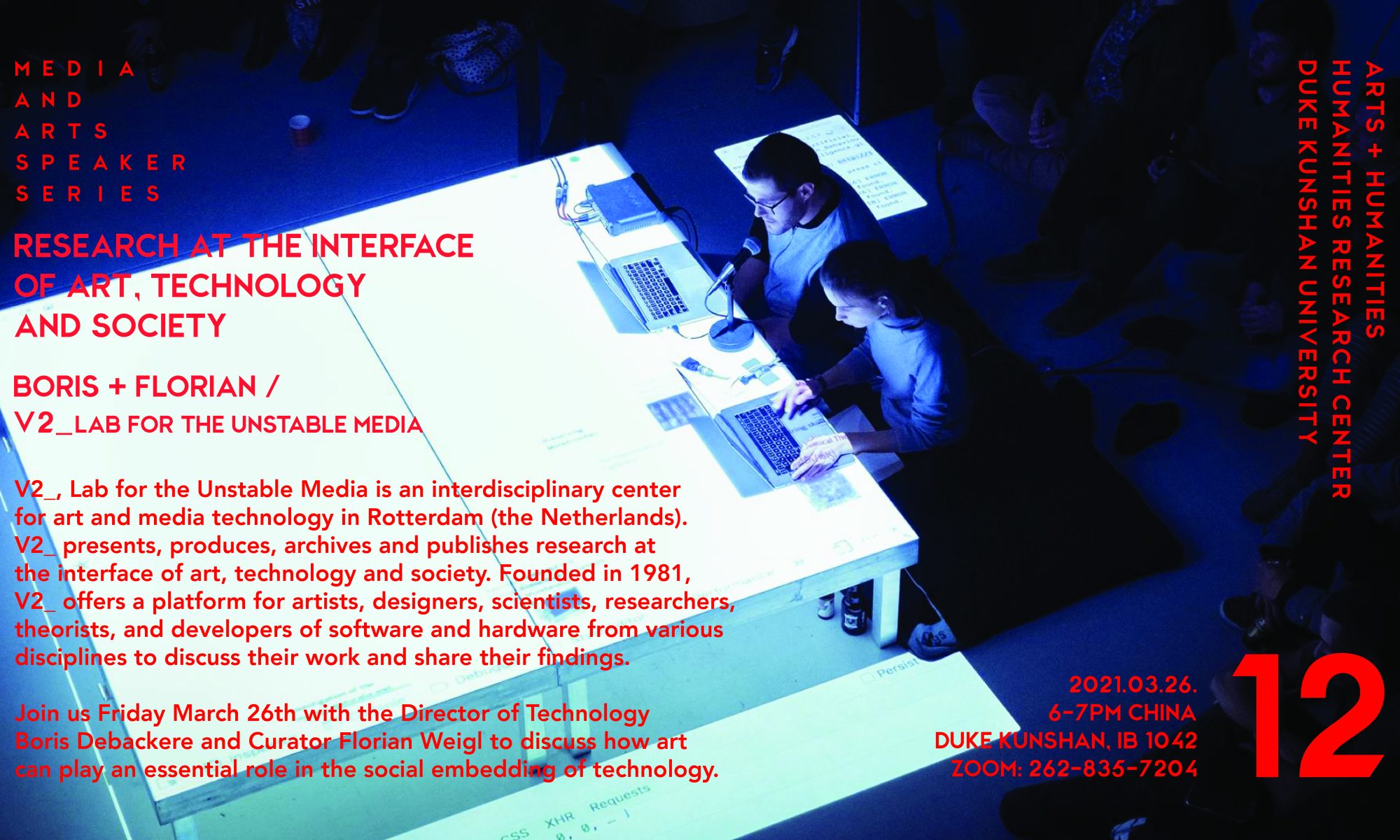 The lecture scheduled on Friday March 26th, 2021 at 6pm China Central time features V2_Lab for the Unstable Media Lab Director Boris Debckere and Curator Florian Weigl. They will present their philosophy, methodology, research and practice at the intersection between art, technology and society. This series is organized and hosted by Prof. Benjamin Bacon and Prof. Vivian and supported by Arts and Humanities and the Humanities Research Center at Duke Kunshan University. This event is open to the public.

V2_Lab for the Unstable Media

V2_, Lab for the Unstable Media is an interdisciplinary center for art and media technology in Rotterdam (the Netherlands). V2_ presents, produces, archives and publishes research at the interface of art, technology and society. Founded in 1981, V2_ offers a platform for artists, designers, scientists, researchers, theorists, and developers of software and hardware from various disciplines to discuss their work and share their findings. In V2_’s view, art and design play an essential role in the social embedding of technological developments. V2_ creates a context in which issues regarding the social impact of technology are explored through critical dialogue, artistic reflection and practice-oriented research. END_OF_DOCUMENT_TOKEN_TO_BE_REPLACED

What is intimacy, actually? How do you put into words what this multifaceted experience can mean, how do you define it? In the second installment series on intimacy organized by the Thursday Night Tea Research Group, screenwriter and director Camila Gonzatto invited participants to workshop some ideas of how intimacy can be defined. Gonzatto has prolifically written and directed short films, feature films and films for TV, with many of them screened at various film festivals around the world. 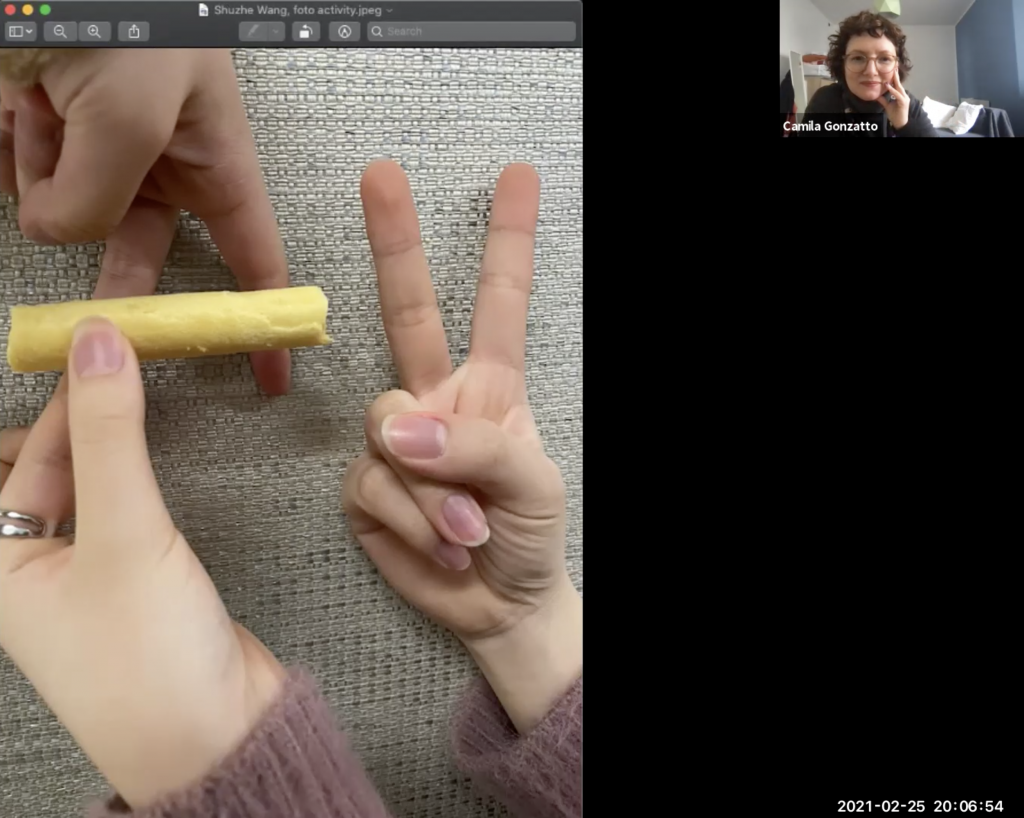 The session kicked off with a screening of her award-winning short film Intimidade (2004), where a discussion about whether a toothbrush can be shared yet or not leads a couple to confront some of the problems in their relationship- how intimate are they, really? In a relationship, how far are you willing to go to be intimate? As far as to share a toothbrush? END_OF_DOCUMENT_TOKEN_TO_BE_REPLACED