Wednesday night will be the screening of  Wong Kar-Wai’s Chungking Express (1994).  Prof Richard Davis and Prof Seth Henderson will both say a few words of introduction to the film and facilitate a discussion after the screening.

There will be free pizza (from a GOOD place for pizza) starting at 6:20pm. The screening will be at the IB Lecture Hall. 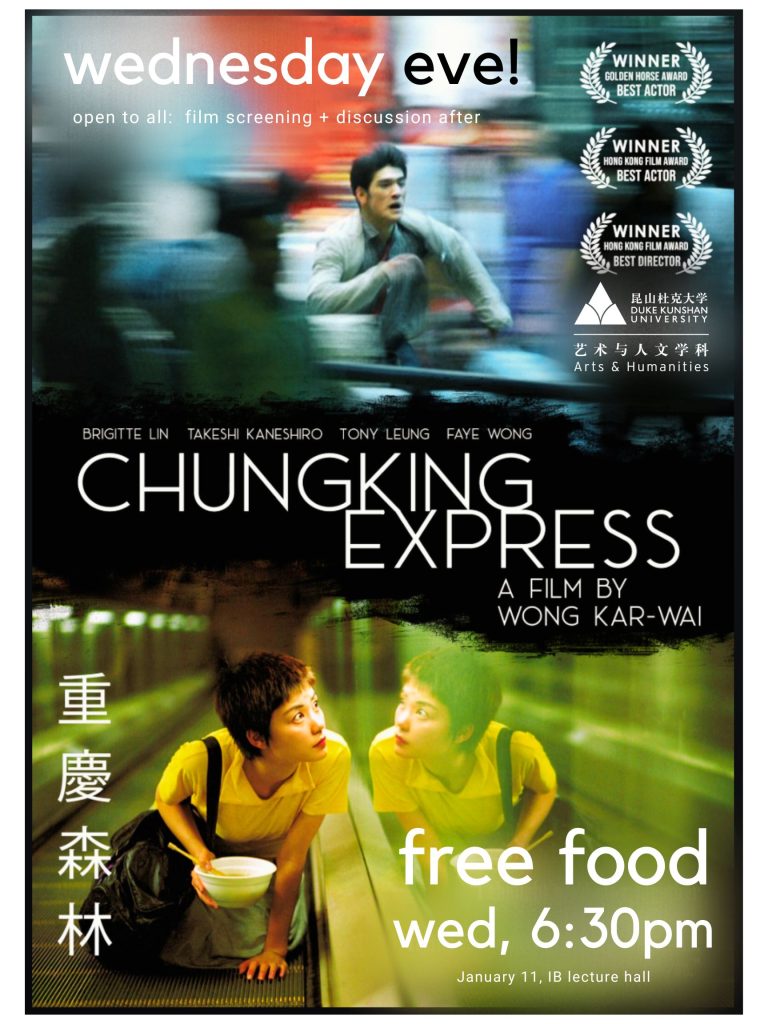 “Made in China: Cities and the People that Make Your Shoes” is funded by HRC’s Doc Lab as part of  Doc Lab’s ongoing “Requests for Proposals: Documentary Projects.”

Project summary: China continues to have the world’s largest footwear industry. As a result of the coronavirus pandemic, the country faced quarantines and closed factories, including most of the shoe manufacturing facilities. The pandemic had an impact on both domestic and global manufacturing and distribution operations within these businesses, disrupting an already fragile supply chain. END_OF_DOCUMENT_TOKEN_TO_BE_REPLACED

Project Summary
Crypto philanthropy, with the word “crypto” referring to “using blockchains and their cousin technologies as tools themselves to achieve impactful outcomes” and the word “philanthropy” concerning “allocating unrestricted capital towards the improvement of society, life, the physical world, and everything in between” (Lehrer 2022), is now gaining increased attention as the concept of cryptocurrency continues to emerge and thrive in many areas. For example, cheecoin (CHEE), Hollywood’s first NFT and game metaverse token, focuses on helping stray animals. END_OF_DOCUMENT_TOKEN_TO_BE_REPLACED

Maggie began this session by introducing her contribution to the documentary. “There exist two kinds of producers,” said Maggie, “the first kind invests money and contributes nothing else; the other kind works on every part of the production.” As a producer of the second kind, Maggie made sure everything in the movie was working — communicating with organizations, companies, and individuals about their appearance in the documentary, and proofreading the translation and edits made to the film. The production took four years in total. With almost everything done by only a team of three people, the success of the documentary is unbelievable. She also shared that she was majoring in nano-science, though ended up working in filming industries.

Below is the Q&A session with Maggie Li:  END_OF_DOCUMENT_TOKEN_TO_BE_REPLACED 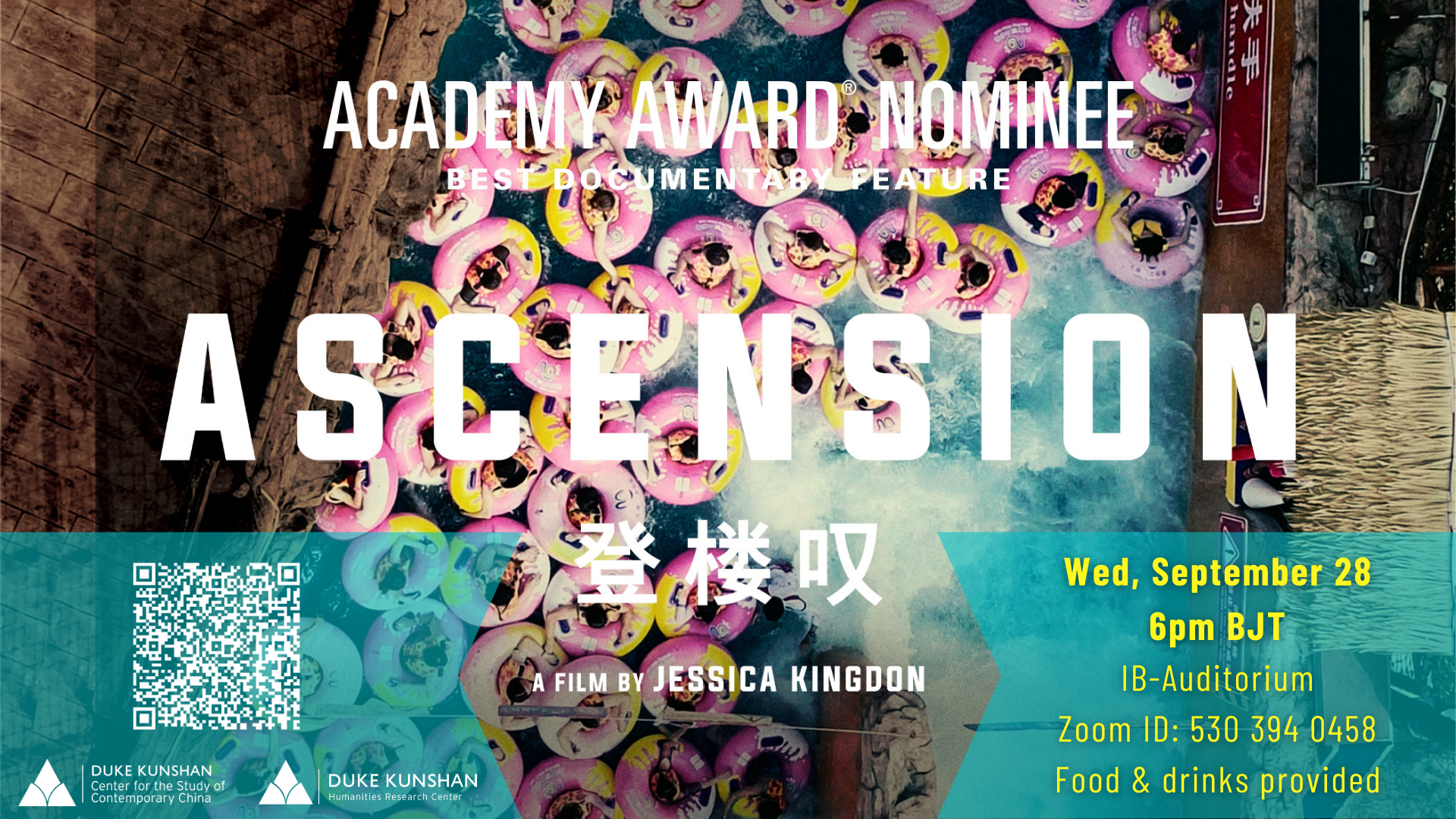 Ascension, nominated for an Oscar as best documentary feature, explores the myriad corners of China’s increasingly stratified economic classes. Everything we use every day is the product of someone else’s labor. Cellphones and computers, water bottles and plastic cutlery, soap dispensers and blankets are all items in one interconnected chain of global capitalism that the documentary Ascension explores with curiosity, candor and criticism.

END_OF_DOCUMENT_TOKEN_TO_BE_REPLACED 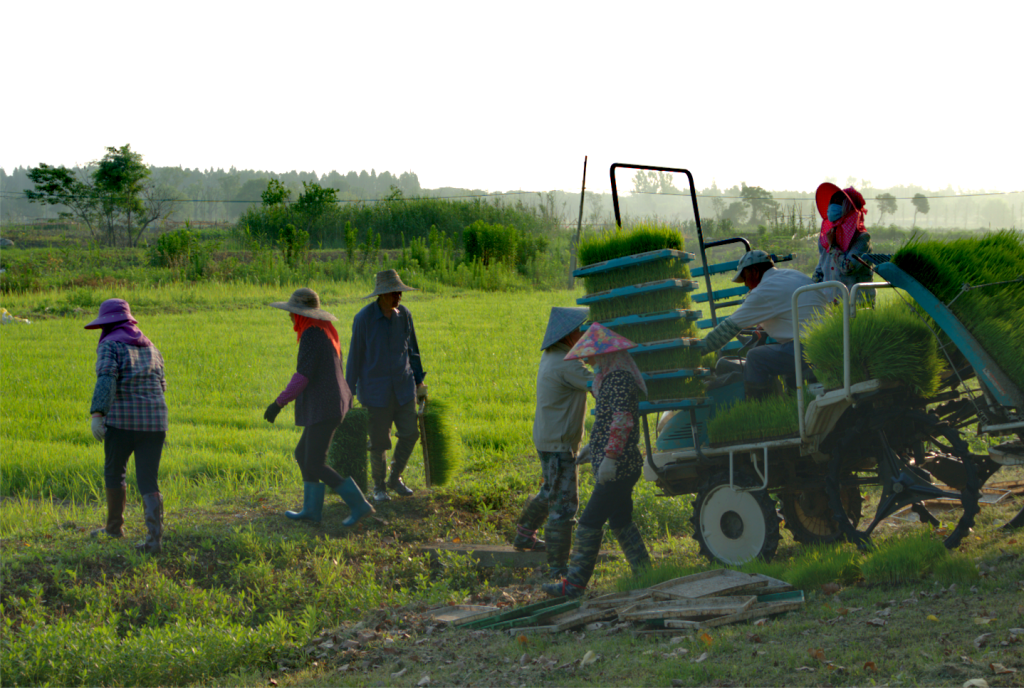 HRC Doc Lab‘s research “Documenting the Sustainability of Localized Organic Farming” is an episodic documentary video and photo essay that will focus on the Yue Feng Island Organic Farm which is located in Kunshan. The documentary will investigate the sustainability of smart agriculture at the intersectionality of culture, linguistics, economics, ecology, and environmental studies. The documentary will consist of three parts: 1) the regional oral culture: the connection between traditional farming culture and the local Kunshan dialect, 2) the relationship between crop diversity and genetically modified food, and 3) sustainability in smart agriculture: how the farmers and administrators incorporate the idea of sustainability into production and operation.

The Humanities Research Center proudly announces the current research projects being conducted by the HRC labs. We invite you stay in touch with updates on each of these projects by checking the news sections of our website and following our weekly newsletter.

PROJECT 1
Title: The Neganthropocene and Arts (Case studies in China)
Who: Prof. Jung Choi, Meixuan Wang, Yujia Zhai
Project summary: Inspired by the notion of Neganthropocene by a French Philosopher, Bernard Stiegler, the study explores innovative tactics by Chinese emerging artists that challenge the human-centered logic of understanding the world. 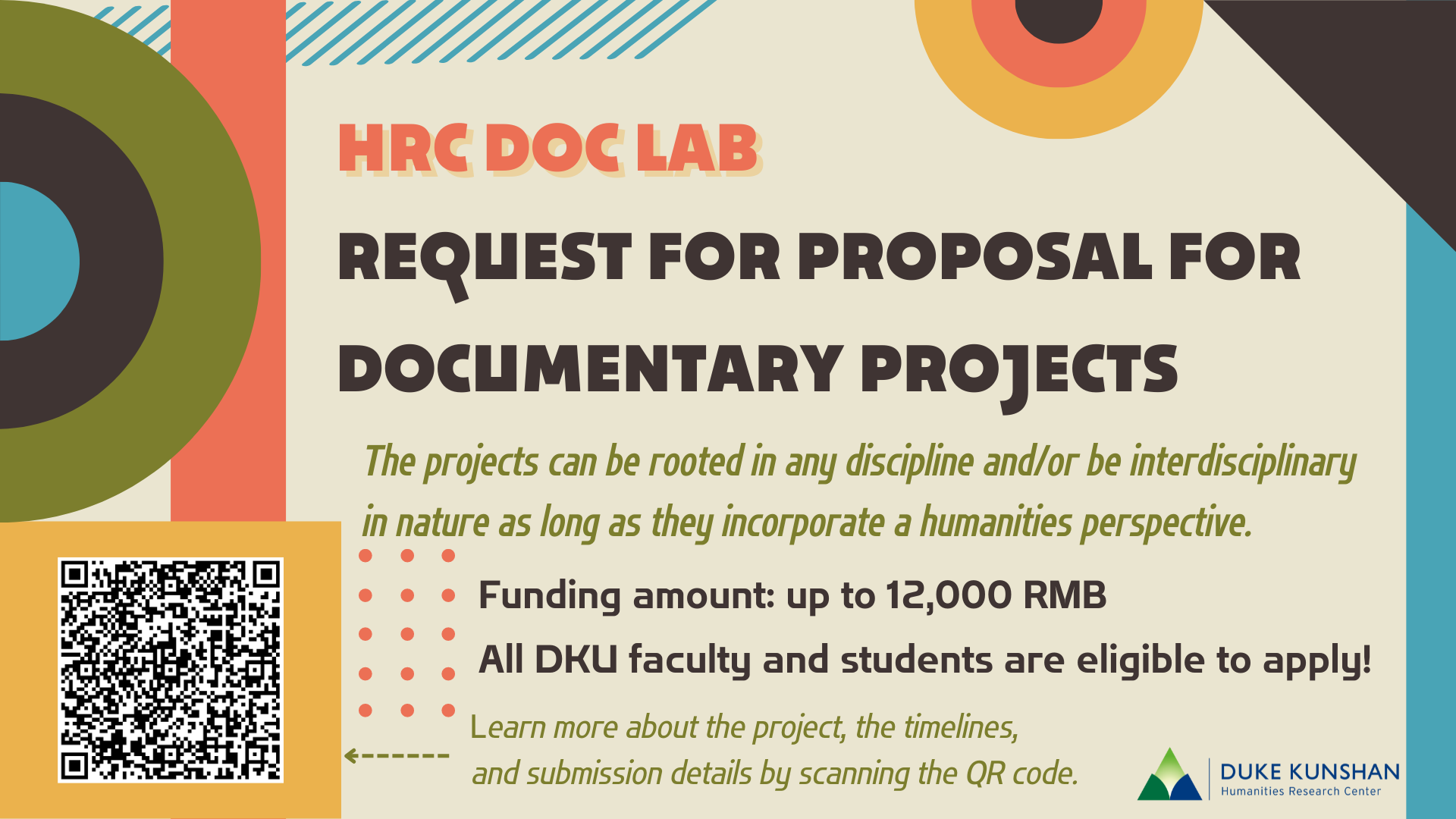 Both students and faculty are invited to submit project proposals. Students who would like to submit proposals are required to find at least one DKU faculty member to mentor the project. Faculty who submit a proposal must incorporate at least one student role as part of the project. Teams featuring multiple student roles are highly encouraged. Proposals that include or consist of Signature Work projects are welcome. 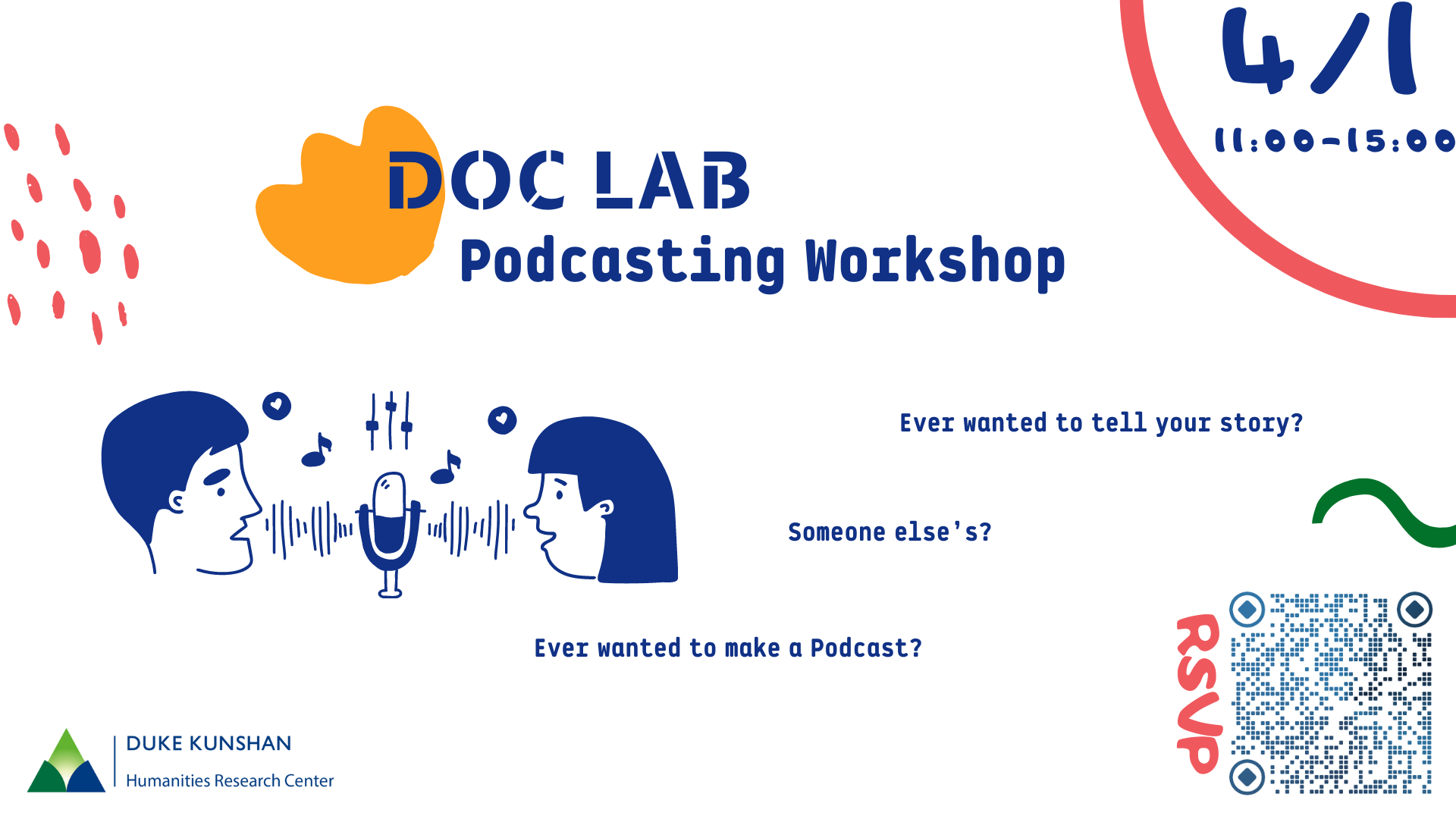 Have you ever been curious about how a podcast or audio documentary is made?  Have you wanted to make your own or be on a team that produces them?  In this workshop, you will get the chance to do it.  In a small group, we will work together to: