Rising sea levels due to climate change are already having severe impacts on the nation of Tuvalu. It proposes to build a digital replica of itself in the metaverse. In this talk, we will not only ask whether it can be done but explore the actual message hidden in this announcement. This leads us to explore some broader questions pertaining to the relationship between citizenship and the politics of climate change: Will technology innovation save us? What responsibility should citizens take in making ethical consumption choices? What is the role of design and designers in intermediating between government, industry and citizens? END_OF_DOCUMENT_TOKEN_TO_BE_REPLACED 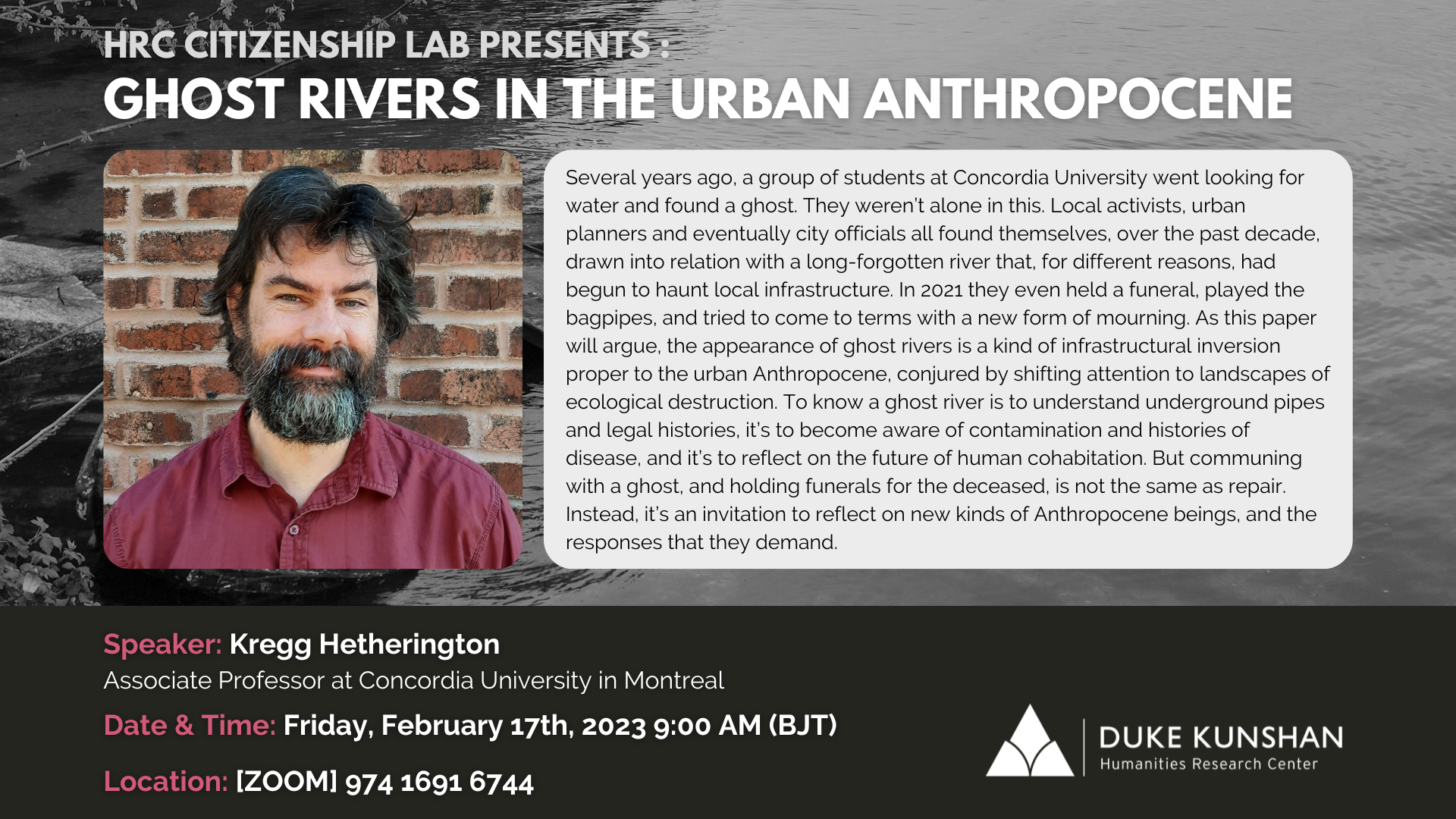 Abstract
Several years ago, a group of students at Concordia University went looking for water and found a ghost. They weren’t alone in this. Local activists, urban planners and eventually city officials all found themselves, over the past decade, drawn into relation with a long-forgotten river that, for different reasons, had begun to haunt local infrastructure. In 2021 they even held a funeral, played the bagpipes, and tried to come to terms with a new form of mourning. As this paper will argue, the appearance of ghost rivers is a kind of infrastructural inversion proper to the urban Anthropocene, conjured by shifting attention to landscapes of ecological destruction. To know a ghost river is to understand underground pipes and legal histories, it’s to become aware of contamination and histories of disease, and it’s to reflect on the future of human cohabitation. But communing with a ghost, and holding funerals for the deceased, is not the same as repair. Instead, it’s an invitation to reflect on new kinds of Anthropocene beings, and the responses that they demand. END_OF_DOCUMENT_TOKEN_TO_BE_REPLACED

To apply, please send CV and cover letter to citizenshiplab@dukekunshan.edu.cn

Workload: Project based, and up to 10hrs/week (40 RMB/hour)
Starting date: Immediately

Main Duties and Responsibilities: Assisting the Lab co-directors with Lab-related research activities. This may include, but is not limited to, identifying potential guest speakers; assisting the lab directors with bibliographic research for citizenship-related publications; and identifying case studies and other materials for inclusion in article and book manuscripts written by the Lab co-directors or affiliates. END_OF_DOCUMENT_TOKEN_TO_BE_REPLACED

Project Summary: This project explores the role of poetry as a key force in the production of solidarity between new and emerging nations in the 1950s. From multilateral peace conferences to transnational poetry anthologies, the works of left-leaning poets such as Nazım Hikmet, Pablo Neruda, and Nicolas Guillén were widely disseminated across a range of mediums during this period, making them highly influential in shaping aspirational forms of internationalist belonging and world citizenship. One of Turkish poet Hikmet’s most popular works, Angina Pectoris (1948), for example, opens with the following lines: “If half my heart is here, doctor / the other half is in China / with the army flowing / toward the Yellow River.”

END_OF_DOCUMENT_TOKEN_TO_BE_REPLACED 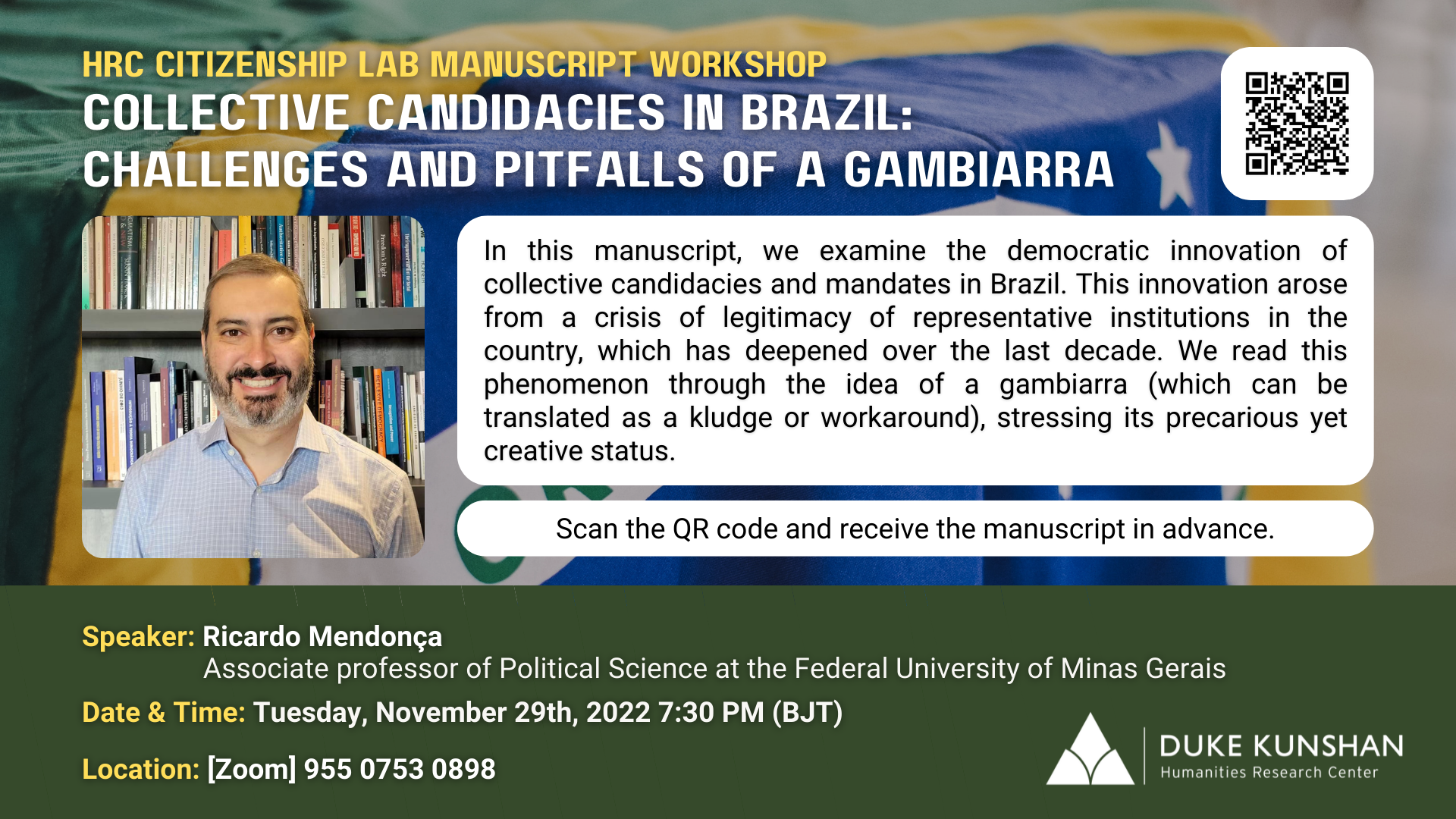 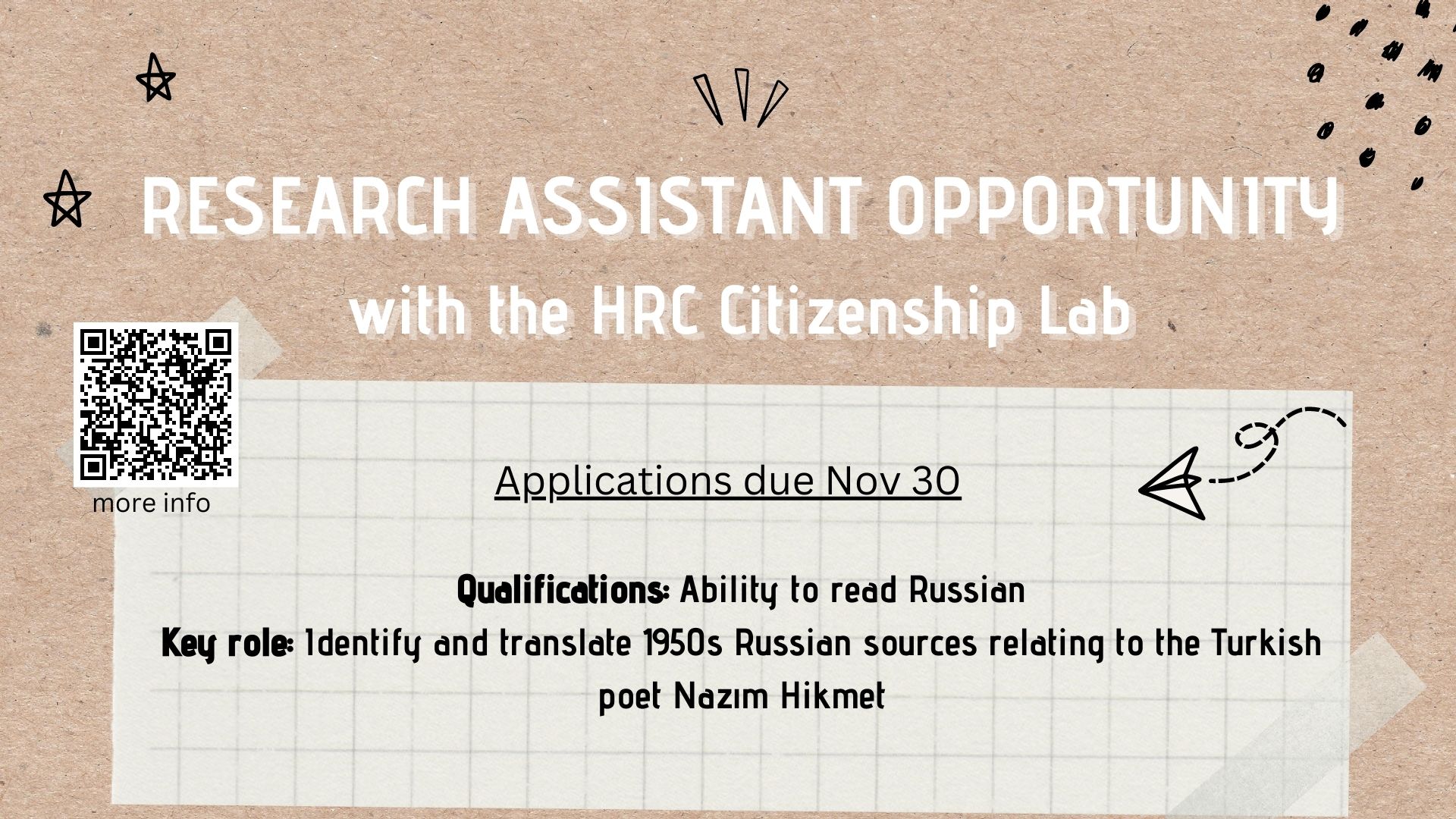 END_OF_DOCUMENT_TOKEN_TO_BE_REPLACED

The Citizenship Lab invites applications for funding from faculty, Class of 2023, and Class of 2024 students working on or developing Signature Work (SW) projects related to citizenship.

Applications will be reviewed on a rolling basis. Please reach out to the Citizenship Lab (citizenshiplab@dukekunshan.edu.cn) for questions and to submit your application.

END_OF_DOCUMENT_TOKEN_TO_BE_REPLACED

Elena Lopez is a PhD candidate in anthropology at James Cook University in Townsville, Australia. Her research interests include political philosophy, social- environmental and multispecies justice, conflict, nationhood, and understandings of citizenship. In her doctoral thesis, Elena disturbs current understandings of political community, aiming to learn something new about the conditions that can make living together possible and for decolonial ecologies to flourish. Launching an ethnographic investigation into the White settler and her understandings of shared responsibility, Elena explores the creative processes of political struggle to examine decolonial thought in relation to temporality, citizenship, and notions of white Australian identity.

Project Summary:
Since the early 2000s, lawmakers in China have started to more formally engage citizens in policy formulation through increased transparency, digitalization, and a public consultation procedure. The Legislation Law (2000) states that “Legislation should embody the people’s will … and guarantee that the people participate in legislative activities through various channels.” However, the question is to what extent the interests of citizens are indeed considered during lawmaking processes by the National People’s Congress.

To address this question, through qualitative content analysis of legislative records and case studies, this project analyses the extent to which NPC delegates draw attention to citizens and citizen concerns during lawmaking processes.

HRC Citizenship Lab is seeking a Research Assistant for the Casa Río: Biocultural citizenship and soy extractivism from Argentina to China research project.

Student Job Title: Research Assistant for The Citizenship Lab at the Humanities Research Center
Number of Students to Hire: 1 (open to students from any track)
Stipend: 40 RMB/hour
Workload: Project based, and up to 10hrs/week
Starting date: Immediately

Applications due by Oct 21, 2022, or until filled. Please submit CV and cover letter to citizenshiplab@dukekunshan.edu.cn. END_OF_DOCUMENT_TOKEN_TO_BE_REPLACED