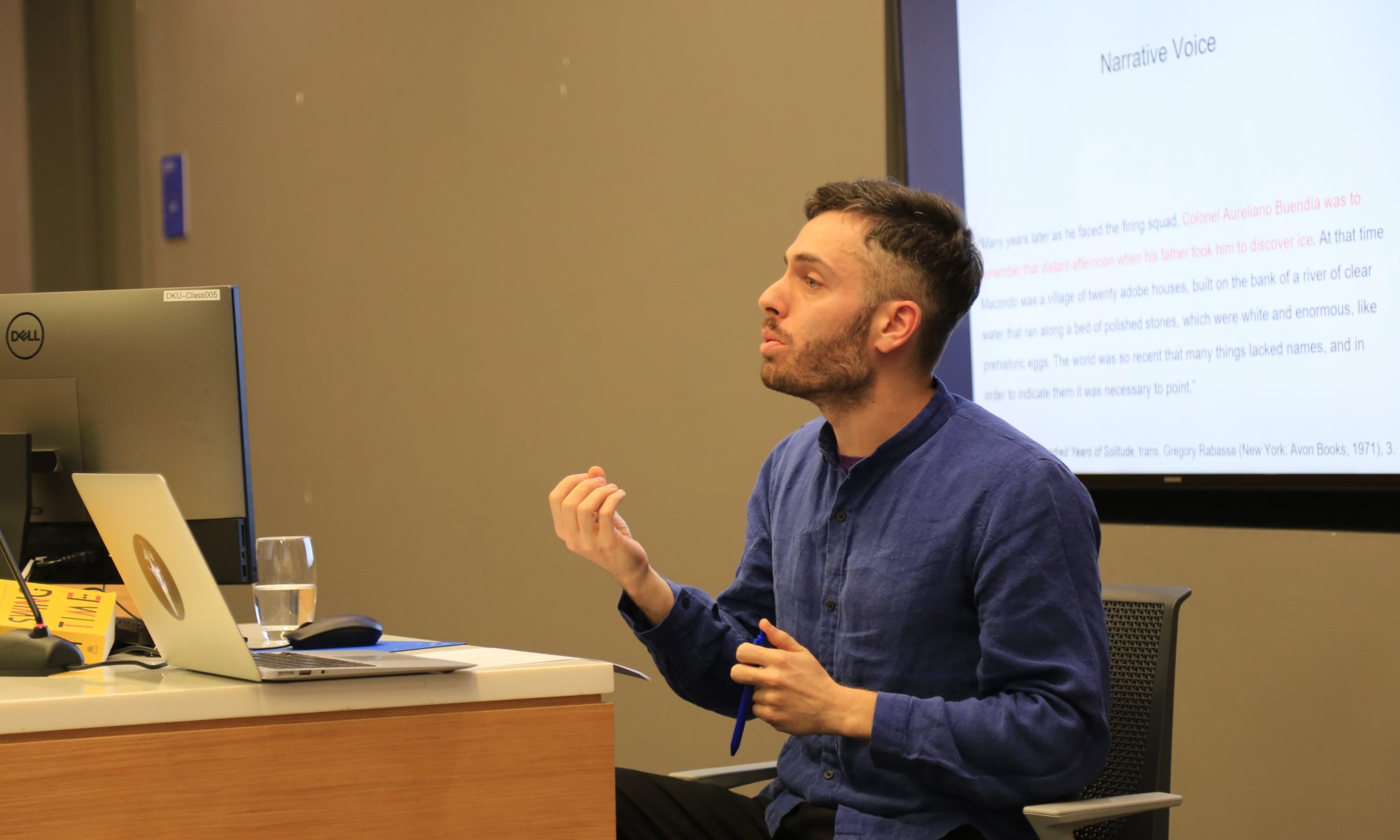 In this age of MeToo movements and greater awareness of women oppression and the restriction of their basic rights, it is often prudent to look back upon the literary works that may have upheld the traditional ideas of masculinity, resulting in the formation of such a machismo culture.

It is that point that Caio Yurgel, our accomplished speaker for the latest in the Duke Kunshan Colloquium Series, emphasizes upon. According to Yurgel, the fact that the word ‘machismo’ is derived from Spanish, and yet utilized across different languages, is entirely non-coincidental. Thus, we, along with Yurgel, turn our attention to Latin America and more specifically, Latin American literature, in order to find a connection to the prevalence of chauvinist culture in that very society.

Yurgel focuses on the perhaps the pinnacle of Latin American literature, the oeuvre of Gabriel Garcia Marquez, a childhood hero of his, and attempts to answer a recurring suspicion befalling Marquez and other Latin American authors. Is their infatuation with manliness (as portrayed in their works) an extension of their own worldview, or is it rather a fictional re-creation (and thus a critique) of the morals and praxes observed in Latin-American society?

Amiable and yet concise, across the period of his lecture, Yurgel proved to be a born orator, effortlessly knitting together multiple personal anecdotes with informed literary analysis. The lecture began with a brief introduction to the magical realism of Gabriel Garcia Marquez, filling the gap between Tolkien and Salinger, for Yurgel’s younger self. It was Garcia Marquez’s writing style, a unique mix of implausibility and reality, which made Yurgel fall in love with the art of storytelling. An accomplished author himself, it is Yurgel’s earlier love for the works of Garcia Marquez’s works which makes his current position so very intriguing and authoritative.

It was upon revisiting Marquez’s literature later on in his life, that Yurgel had the unsettling feeling that these works highlighted the machismo culture, with both women and men portrayed through a conventional patriarchal lens. Yurgel began researching more into the matter, introducing to the audience five individuals who despite their conflicting viewpoints on the matter, made the common connection between Garcia Marquez and the prevalence of heightened masculinity in his works.

We are first introduced to Mario Benedetti, perhaps the first individual to identify the masculine nature of Marquez’s work (el machismo sobrio de Garcia Marquez). We then arrive at Wolfgang Luchting and Suzanne Levine, both of the view that Marquez in his works is mocking machismo, utilizing irony while also making a distinction between Marquez’ work and the classic Latin American machismo. Sylvia Koniecki, on the other hand, claims Garcia Marquez reproduces a vision of sex that is anchored in a colonial male-dominated view. Perhaps most interesting is the story of Soledad Mendoza, a female journalist who once interviewed Garcia Marquez. Upon being asked whether he was machista, Marquez replied that it was the worst insult, and that he once punched an individual for calling him that. Oh, the irony.

However, Yurgel fails to see the mockery that Levine and and Luchting saw. Much to the amusement of those present, Yurgel presents the prevalence of well-endowed men and the detailed description of their genitalia as his evidence. Rather surprisingly, the argument is not as far-fetched as what some individuals might initially think it to be, with content of a similar nature being repeated in numerous Garcia Marquez’s works. Yurgel realizes there was a common genealogy, a sense of pride in this animal imagery, and ends by saying, “In Gabriel Garcia Marquez’s world, honor begins between the legs.”

Garcia Marquez’s presumably chauvinist nature does not, in any way, invalidate his talents as an author. Yurgel considers the opening passage of Cien años de soledad or as it is more widely known, One Hundred Years of Solitude, as one of the best novel openings ever penned, due to Garcia Marquez’s unique narrative tone, expert juxtaposition of verbal tenses, emphasis on tension and total mastery over world building. After an engaging discussion, during which Yurgel fielded several questions from the audience, the lecture concluded on significant question. If Garcia Marquez does intend to mock the masculine and chauvinist culture prevalent in Latin American literature, if his audience cannot discern his intentions, does it even really matter?