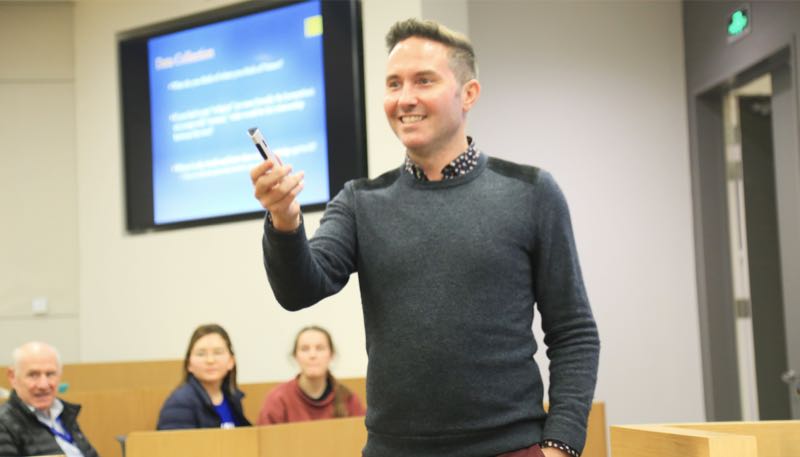 Over the eons, the incessant ticking of time has culminated in our present reality: the Anthropocene, or the age of humans. This title comes with implications and indications about the state of the world, its hierarchies and underlying attitudes. And it is upon these very concepts that our distinguished speaker, Professor Whitney Bauman spoke during his lecture as part of the Duke Kunshan Colloquium Series, hosted by the Humanities Research Center.

Bauman who is Associate Professor of Religious Studies at Florida International University, began his lecture by mentioning his close conversations with DKU’s own Professor James Miller, on the topic of planetary humanities. Couched within those very conversations was the observed contemporary global milieu, i.e. the millennial argument between neoliberal globalism and nationalization. Spurred by the advent of globalization, this debate has captured the eyes of many and has taken hold of individuals across the globe, especially due to the far-reaching hand of globalization itself. Bauman, on the other hand, wants to propose an alternative to both neoliberal globalization and nationalization, drawing from Gayatri Spivaks’s distinction between globalization and planetary subjects.

Bauman gave his audience three questions to ponder over.

From the audience’s responses, Bauman proved his own point that the very concept of the Anthropocene confirms the idea that humans are indeed at the top of the planetary hierarchy and somehow in control. Relying on western modern understandings of themselves, individuals view themselves as distinct from the concept of nature and thus, dominating nature itself.

The concept of the Anthropocene, moreover, lumps all humans together as a single Anthropos, thereby erasing class, cultural, racial, religious, and other differences. Not all people are equally responsible for the current global ecological crises we find ourselves in. According to Bauman, the two phenomena that define the Anthropocene are globalization and climate change. Globalization refers to the prevalence of increasing interconnectedness across the globe, brought on by the advent of industrialization, technological advancements and the rise of global trade. It is through this phenomenon that individuals can be affected in their daily intimate lives by decisions taken and implemented thousands of miles away. While a large portion of the population is familiar with the notion of climate change, relevant global action is yet to be taken.

Moving on to Bauman’s second question, it was revealed that most of the audience, once again akin to western modernity, think of the two (religion and science) as separate concepts or fields. Religion is largely viewed as subjective while science as objective. Bauman through his lecture intends to push both closer together. He argues to understand them as always and already together. They co-create one another and cannot be separated out by some sort of understanding of a neutral, secular space. Bauman attempts to clarify what he means by religion, taking into account the diverse audience and thus, the wide breadth of perspectives, especially on a topic as contested as religion. Taking religion back to its anthropological roots, Bauman views religion as a collecting process, to make sense of the world we live in. In short, how humans make meaning of the randomness of life.

Bauman clarifies what he means by science for the very same purpose. According to him, whereas religion weaves concepts and society together, science takes them apart, to find meaning within the flow of life and the planet. Moving on, he makes the rather bold argument that all facts are overtheorized and all theories are under-factualized.

Bauman, in his drive to put both religion and science in conversation, argues that both fields talk of the natural world, while explaining what he means by nature. Talking of natal/natality, Bauman views humans as a part of this process because despite their assumptions, it is an all-inclusive category, consisting of all aspects of the universe. There is nothing unnatural, if it exists it is nature. However, individuals inherently make hierarchies and distinctions between what is unnatural and natural.

From here, Bauman moves onto his third topic i.e. the singularity and objectivity of modern western truth. Utilizing an amusing yet easily comprehensible mix of metaphors, Bauman begins to decolonize western epistemology. This means paying attention to other-than-western systems of knowledge production, removing the sciences as the measure against which all knowledge must be judged, and paying attention to wisdom and perspectives from the more-than-human world.

According to Bauman, there exists a double understanding of truth, based on human exceptionalism (human can improve the natural world) and dead nature, plus the reductive productive model. These concepts are what Bauman was working on during his Humboldt tenure, namely the transition from monotheistic worldviews to naturalistic world view, e.g. from god to nature, church to science, faith to reason, belief to knowledge. He argues that the imposition of a single truth globally accentuates environmental problems and moreover, harm towards world bodies.

Bauman plays on the basic economic presumption that humans are selfish and logical creatures, noting reason to be a human concept. However, we are only pawns in the chess game which is life, and new aspects emerge daily which have been unaccounted for. Life is more than reason, as emotions, feelings and desire play a huge part in the human condition.

Can we have a viable understanding of truth without the singularity aspect of it?

In response to this popular question, Bauman gives the examples of fields and areas of knowledge the very existence of which negates the question itself. These concepts include multi-perspectivism and viable agnosticism. Having proven his arguments, Bauman concluded that humans must put their perspective in context with and alongside other natural perspectives, the needs of the other components of the natural world should be articulated to the public by relevant experts in their fields. Nobody has the whole truth, but together we can achieve a shared perspective, which weaves together a far more comprehensive view of the world than the world view of a single individual.