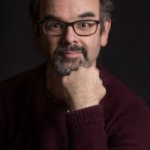 On Friday January 10, the Humanities Research Center welcomes Professor Mark Larrimore from the New School, New York City to give a presentation on Religious Texts in the Anthropocene and to enter into a conversation with HRC Co-Director James Miller.

Professor Larrimore is Associate Professor of Religion at the New School, and author of two important books about contemporary religion and politics.

During this one hour presentation, Professor Larrimore will explain his research on how religion and the Anthropocene can be related to each other, and will engage in conversation with Professor Miller about conducting research in an interdisciplinary and integrated way.