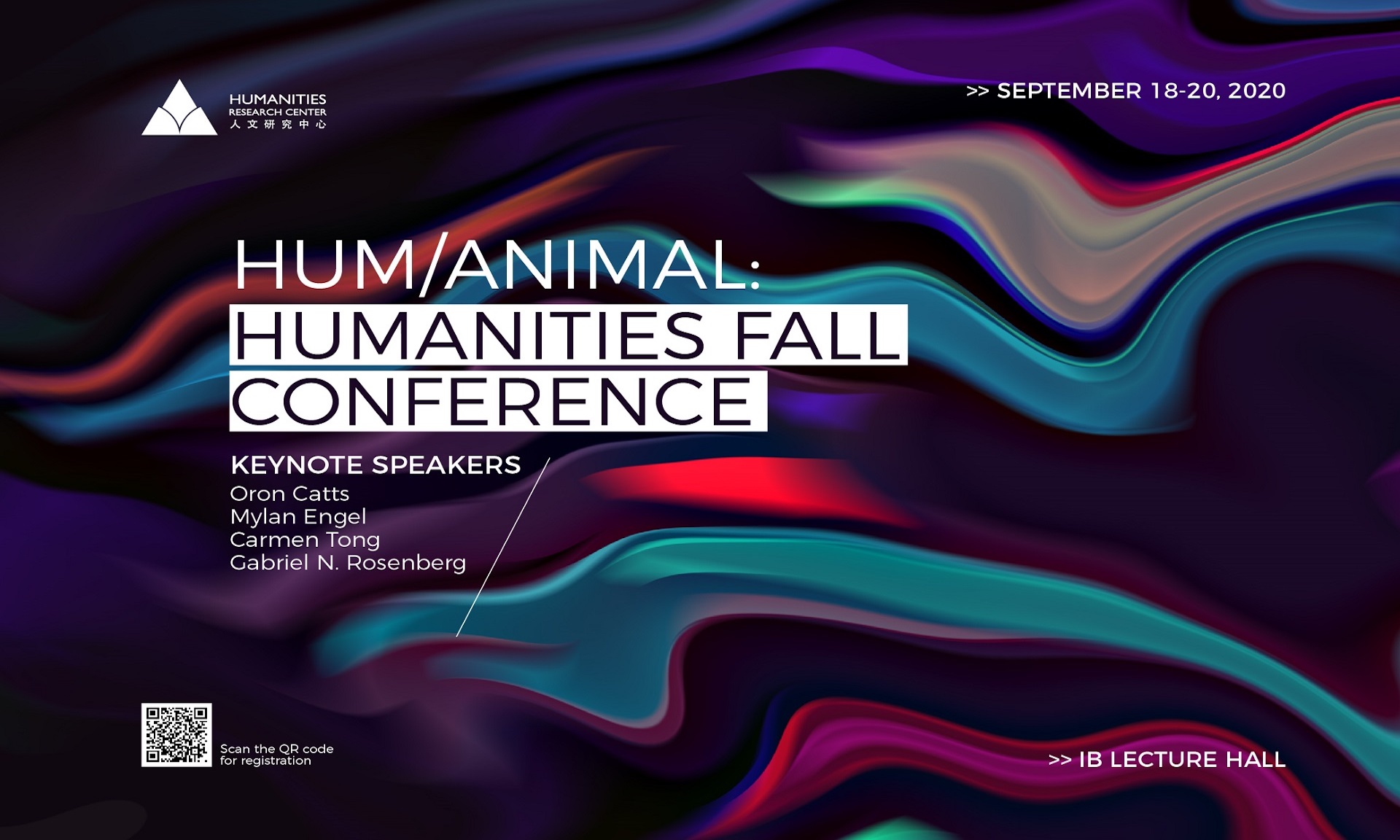 Hum/Animal is the theme of the Humanities Research Center’s fall conference and student film festival, which takes place from September 18-20 on the campus of Duke Kunshan University, and via Zoom.

Oron Catts is an artist, researcher, designer and curator whose pioneering work with the Tissue Culture and Art Project which he established in 1996 is considered a leading biological art project. In 2000 he co-founded SymbioticA, a biological art research centre at The University of Western Australia. Under Catts’ leadership SymbioticA has gone on to win the inaugural Prix Ars Electronica Golden Nica in Hybrid Art (2007) the WA Premier Science Award (2008) and became a Centre for Excellence in 2008. In 2009 Catts was recognised by Thames & Hudson’s 60 Innovators Shaping our Creative Future book in the category “Beyond Design”, and by Icon Magazine (UK) as one of the top 20 Designers, “making the future and transforming the way we work.” Catts was a Research Fellow in Harvard Medical School, a visiting Scholar at the Department of Art and Art History, Stanford University, and a Visiting Professor of Design Interaction (2009-2012), and a Professor at Large in Contestable Design (2015-2017) at the Royal College of Arts, London. In 2012-2013 he set up a biological art lab called Biofilia—Base for Biological Art and Design, at the School of Art, Design and Architecture, Aalto University, Helsinki, where he was a Visiting Professor. His work was covered by The NY Times, Washington Post, Wired, New Scientist, Time, Newsweek and other media.

Mylan Engel is Professor of Philosophy at Northern Illinois University. He specializes in epistemology and ethics, with an emphasis on animal ethics, environmental ethics, and global justice. He is lead editor of The Moral Rights of Animals (Lexington Books, 2016) and co-author (with Kathie Jenni) of The Philosophy of Animal Rights: A Brief Introduction for Students and Teachers (Lantern Books, 2010). He has developed a commonsense approach to ethics, which he uses to argue that moderately affluent individuals have a moral obligation to assist the world’s food insecure and to argue that veganism is morally required.

Carmen Tong is Lecturer in Sociology at Hong Kong University. Her research expertise lies in the sociological and ethnographic investigation of schooling and student culture in Hong Kong, and was inspired from her extensive teaching experiences in different higher education institutions there. Her studies explore Hong Kong students’ sexual identities, life visions, and the dynamics of adaptation tactics in the competitive schooling environment. Her recent research has been inspired by the rapidly growing field of human-animal studies and their potential contribution to sociological inquiries, and she teaches a course called Some We Love, Some We Eat: Human-Animal Relationships in the Global Marketplace.

Gabriel N. Rosenberg is Associate Professor of Gender, Sexuality, and Feminist Studies and History at Duke University. He earned his Ph.D. from Brown University in History. He was the recipient of the Gilbert C. Fite Award from the Agricultural History Society, the K. Austin Kerr Prize from the Business History Conference, and a François André Michaux Fund Fellowship from the American Philosophical Society. He was a Postdoctoral Fellow at Yale University’s Program in Agrarian Studies, an Early Career Fellow at the University of Pittsburgh’s Humanities Center, and a Visiting Scholar at the Max Planck Institute for the History of Science in Berlin. His essays have appeared in journals such as American Quarterly, GLQ: A Journal of Gay and Lesbian Studies, and Diplomatic History.

Neolife—technologically created, manipulated and/or fragmented life forms—may offer the illusion of an opportunity to break free from hegemonic social constructions of bodies, species, gender, race and class; however in most cases these social constructions are inbuilt within and into the developments of these technologies, their interpretations and applications. Through a series of more than human narratives this talk looks at cross kingdoms organisms, and vessels of care and control that are standing for a type of the more than human. It will explore biological exuberance, the process of cell fusion to develop novel organisms defy classifications and Incubators. These concepts and objects stands for Hum/Animal and beyond, and not only serve as a rich, visual and provocative departure for stories about life and biopolitics, they also contest biological determinism, genohype and are a place where the notion of life can be explored from a post anthropocentric perspectives reflecting on past and contestable future scenarios. Examples of art works by Ionat Zurr and Oron Catts will be presented as material evidence of these narratives.

I begin by tracing the history of Western anthropocentric bias from Aristotle to Descartes and identifying the flawed reasoning underlying the “logic” of domination. Next, I draw on the insights of several now-largely-neglected philosophers to develop a commonsense animal ethic grounded in moral principles that we all share. I then point out some important moral implications of these commonsense principles. I conclude by highlighting many of the synergistic benefits of treating animals with the moral consideration they are due. When we do right by animals, we do right by ourselves, we do right by the environment, and we do right by the future inhabitants of the planet.

The harsh reality today is that we are living in a world full of human-induced environmental crisis and diseases. We have begun to examine what we have done, and started down alternative paths to find a sustainable future. In spite of that, have we ever asked the most inconvenient question—a sustainable future for whom? Our current endeavor of sustainable goals and paths are formulated according to costs and benefits in human terms. Our vision of the future based on our existing worldview that dichotomizes human vs. nature, and society vs. nature. Could there really be a sustainable future, and again, for whom, when we remain anthropocentric in seeing our relationships with nature and other non-human animals? In this keynote speech, Dr. Carmen Tong will raise fundamental questions behind our current efforts in promoting sustainable development goals, and discuss the implications of such developments on human-animal relationships in a posthumanistic future.

Do animals have a place in the history of sexuality? The history of sexuality and environmental history are two of the most influential historicist subfields of the last quarter century. Both are fundamentally (and foundationally) structured by critiques of the concept of “nature”: environmental history seeks to trouble the boundary between human societies and an encompassing natural world they stand apart and over, while the history of sexuality queries how different societies have defined and moralized sex through the contingent and changing concepts of the natural. Despite their shared interest in transforming the idea of nature, the two subfields have limited intellectual exchange and dialogue. This talk explores this dilemma, and the structuring assumptions about sexuality and nature that animate it, by examining the account of meat production in historian William Cronon’s field defining work of environmental history, Nature’s Metropolis (1991). The talk contends that the tools of analysis developed by the history of sexuality can fundamentally transform and enrich Cronon’s account. In particular, it urges environmental historians to treat animal sex as historically constituted rather than universal, essential, or natural. The paper concludes, then, by filing a brief for a more-than-human history of sexuality, one that works to understand animal sex as a vital and neglected factor in human interactions with the natural world.