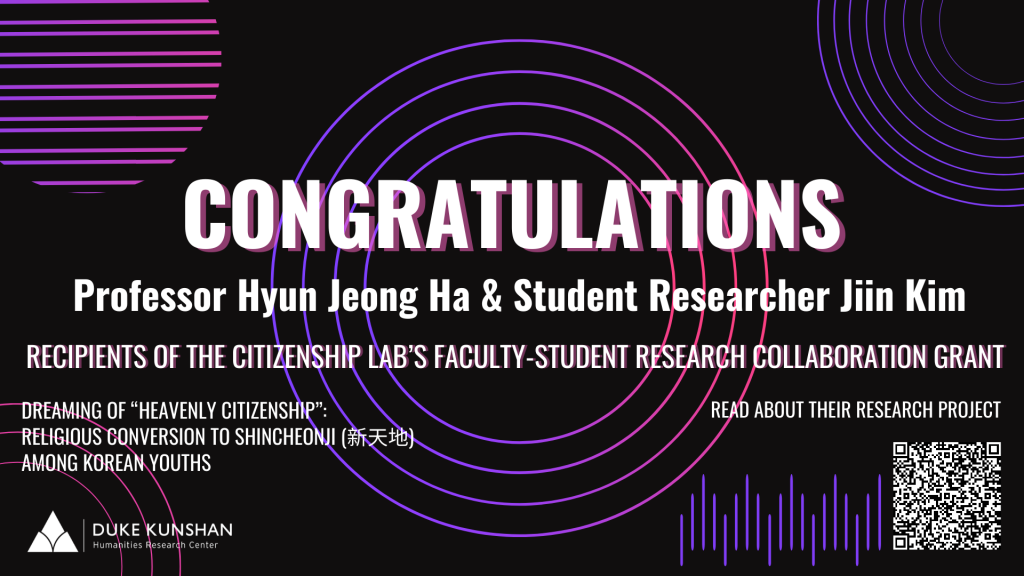 About the Research Project

Project Summary:
In February 2020, the average number of new COVID-19 cases in South Korea rapidly increased from less than one to hundreds per day. This fast increase at the very start of the spread of the virus in South Korea shocked the entire country. Korean media argued that this large-scale infection came from a new religious group called Shincheonji (新天地; New Heaven, New Earth). Since then, this group has been a target of major public blame and stigmatization, while its leader was imprisoned for over six months for not cooperating with the central government’s COVID-19 control policies.

As of 2022, Shincheonji has over 300,000 members, making it the largest new religious group in South Korea. It is now the fourth overall largest religion by membership in South Korea, only surpassed by Protestantism, Buddhism, and Catholicism. Up to 40% of its members are youths in their 20s and 30s, which perhaps explains its explosive growth in membership. This percentage is remarkably high given that young people occupy less than 10% in existing mainstream religions, with this figure declining yearly. Shincheonji can also boast of a global rapid spread in recent years, to over forty countries including Germany, the UK, Australia, and China.

Focusing on the rapid growth in youth conversions to Shincheonji in South Korea, this research seeks to answer the following questions: (1) Why and how are Korean youths in their twenties and thirties attracted to Shincheonji? (2) What are they looking for through their religious commitment? And (3) how do the former Shincheonji members make sense of their religious conversion in regard to their sense of belonging? We will draw on data from in-depth interviews with around twenty young Koreans living in different parts of the country who converted to Shincheonji and later left. We will recruit a diverse group of younger women and men, regardless of their socioeconomic background and the period of time they devoted to the religion. We will not set limitations regarding whether they converted to another religion after Shincheonji. The in-depth interviews will focus on personal narratives, instead of analyzing conversion strategies of the religious group, to understand their decision to convert to and later leave Shincheonji.

We propose a new term, “heavenly citizenship”, to refer to the new sense of social and religious belonging of the Shincheonji members after conversion. They share a belief that they can achieve an eternal life based on their deeds, and this is an exclusive promise to Shincheonji members only. Different from the Calvinist belief that people are predestined, they are saved when they finally meet the standards set by the church leadership in Shincheonji. The concept of “heavenly citizenship” is central to an understanding of younger converts, because once they are registered to the religion and take on the new membership, their orientation to life completely changes. Everything is scheduled centered around high-intensity religious labor, such as attempting to convert strangers on the streets and attending regular meetings, as well as being mobilized to prepare church events, including nationwide and international conferences. Adherents thus find little time for work and study outside of the religion, and they gradually lose their interests in accomplishing “worldly” goals, such as studying academically or securing a stable job, and sometimes even give up new opportunities. Nothing is more important than achieving and maintaining this “heavenly citizenship” to them.

Theoretically, this research will test existing religious conversion theories and investigate how the conversion experiences of Korean young people will advance and contextualize this prior work. Earlier studies on religious conversion in the 1950s have focused on psychological reasons, coercion, and brainwashing as a major reason to convert. But later, studies started to focus more on social factors that motivate people to convert, and this sociological perspective has induced a broader scope in studies on religious conversion. For example, some studies found that those who convert tend to share a similar socioeconomic background, including their younger age (twenties), middle-class status, higher education, and stable family backgrounds. These findings refuted the common assumption that those who are socially isolated would be more likely to convert to a new religion.

The existing studies, however, fall short of connecting personal conversion narratives to the context of overall social changes, a perspective that could help us fill the gap in current literature to understand why a particular group of people convert and later decide to leave the new religion if they do so. In addition, this new study could help clarify what kind of social situations and structures become causative factors for new conversions. Analysis of Korean young people’s personal conversion will undoubtedly contribute to a more holistic academic understanding of young people under social change and how religious conversion offers an apparent exit from anxiety and confusion.

Hyun Jeong Ha is an Assistant Professor of Sociology at Duke Kunshan University, a political sociologist, and an ethnographer. Her research lies at the intersection of sectarianism, violence, citizenship, and the daily resistance of religious minorities in the Middle East. Her current research examines how regime transformation and subsequent changes in political and social climate after the 2011 Arab Spring have affected Christian-Muslim relations in Egypt. Egyptian Christians are in a unique situation as citizens. Although the Egyptian Constitution recognizes them as full citizens, they have limited rights in law and its practice. They have been largely underrepresented in various sectors of Egyptian politics and society. Ha’s research expands our understanding of how citizenship works for religious minorities in authoritarian regimes, including how these minorities cope with their limited rights and daily sectarian interactions.