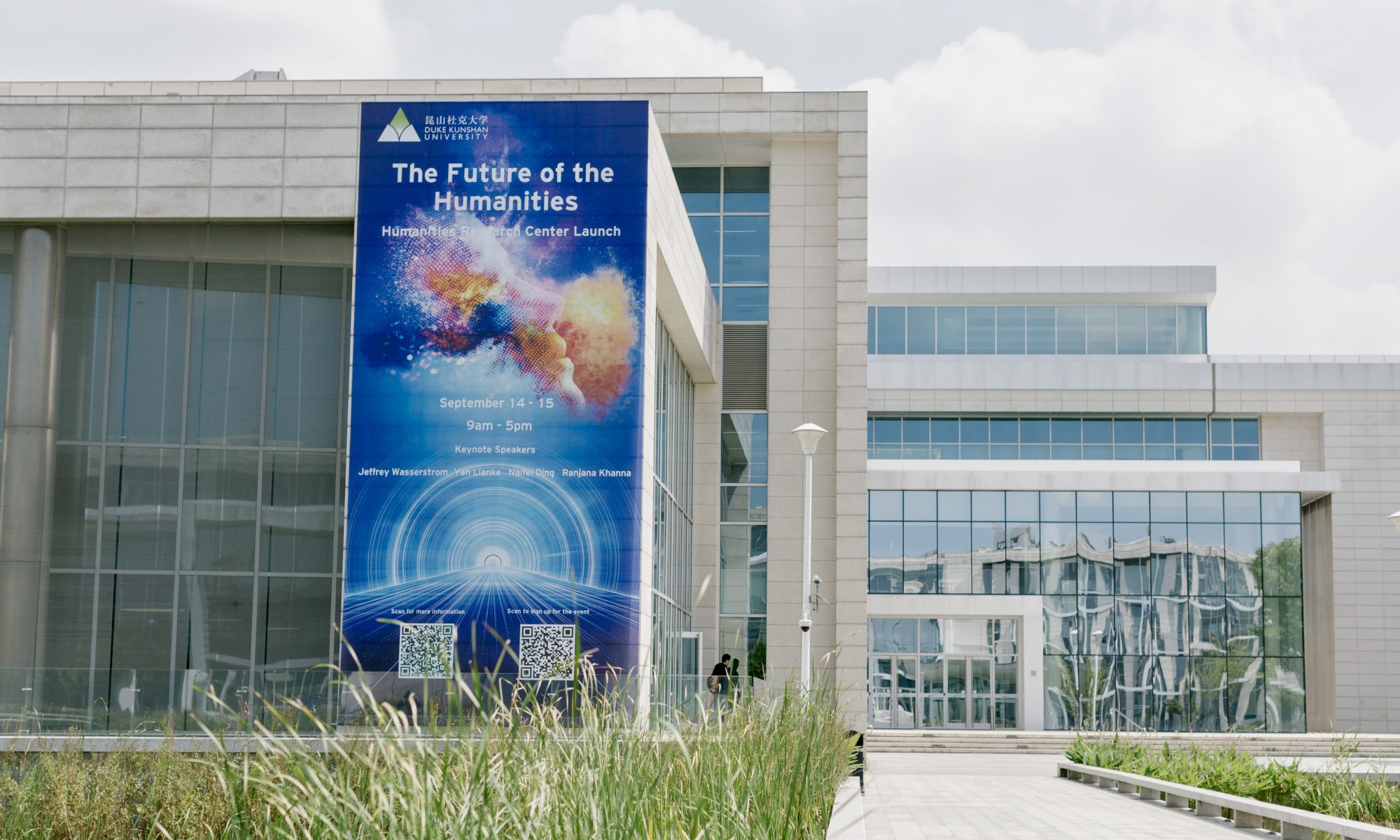 An indefatigable feeling of enthusiasm pervaded the atmosphere of Duke Kunshan University over the weekend of September 15–16, as faculty and students alike geared for two days full of seminars and discussions exploring the future of humanities. The campus experienced a flurry of activity and intellectual stimulation as ideas and perspectives were exchanged among guest speakers, the faculty and the students.

The future is something that is a matter of great trepidation for most of us. The current state of things bodes a bleak tomorrow for the planet. But when you think back to the second half of the twentieth century, things could have been done that would have given us a much healthier planet today. This, according to Professor James Miller, was exactly where the universities of the day failed us. As everybody donned their blinders to prepare for the rat race, we forgot something that would come back us to bite us in just a matter of decades—planetary health. “What scientists couldn’t convince people, poets, preachers and storytellers could, and this is where the humanities come in,” he said, emphasizing the rapidly growing need to “undiscipline” universities so that the citizens of the future will be people who keep the world in perspective, not just their personal needs.

The opening saw a plethora of speeches that underscored the burgeoning need to understand AI and the need for planetary health, and how this can be achieved by interdisciplinary research and interests. As demonstrated by Professor Lim, an “anti-humanities” student who found his door to the humanities while considering artificial intelligence, this day and age calls for a broader view of how the world works and specialized focus in selected areas.

As somebody with an enduring interest in Chinese history and culture, I considered myself extremely lucky to be a part of Professor Jeffrey Wasserstrom’s seminar. The focus of the humanities research seminar was how the same event, retold in different ways in different ways can shape our perception of present events, as exemplified by the Boxer rebellion. The American version of the event often ended at the siege of Beijing, while the Chinese retelling included the military invasion after the rebellion. The UK retelling in their newspapers drew parallels with their colonization of India, while the Chinese newspapers often placed more emphasis on how the event was similar to the opium war and the destruction of the summer palace. The seminar really got me thinking about the media’s role in influencing the milieu’s perception of events that have huge impacts on their lives. Often, we are presented with a story heavily impacted by pre-existing biases which often lead to strategic exaggeration of some aspects of an event or complete erasure of others. Professor Wasserstrom reminded us of the importance of keeping an objective mind while analyzing different events but also to remember that being balanced is not always the same as being objective- sometimes, there is a right and wrong even though it may not be that clear. “Nothing you hear is ever completely true,” he said, for often nations put their own spin on events based on their value systems. The seminar wasn’t simply a lecture on historical events as much as it was a lesson on how to view historical events in a balanced manner. It is often too easy to forget that all human lives have value, and it is often too easy to deny things we do not want to believe in.

Like most students my age, I am plagued by an uncertainty about what I want to do with my life and what career I want to pursue. And so, I wasted no time in attending the career information session. I am someone who finds joy in writing and making art, and the event was essentially heaven for me as I had the opportunity to talk to someone who makes a living through writing and someone who makes a living through making art. It is always lovely talking to people who are basically living what you’ve always considered a pipe dream for yourself. At the same time you are also brought to question why should you be the one who finds joy as you finally get to do what you’ve wanted to do all your life. And so, part excited and part sobered, I headed to the next session, which much to my excitement, was another writer!

Although I haven’t read any of his books yet, I was quite excited as you can always find a thing or two to love in something someone who has lived through much has to say. “We have reached a point in time where writers have a hard time conjuring up a world in our minds because the world we live in is so surreal itself,” said Yan Lianke. “The world we live in is much wilder than anything any of us could ever imagine.” This truly struck a chord with me because if you truly dive deep, words will fail to describe how insanely complicated the world has become. The statement perfectly encapsulated the current state of the world we live in, and put into perspective the importance of the humanities in this increasingly convoluted world.

The Humanities Research Center launch was quite the event—my only qualm is that I didn’t have the time to attend all the events. But each and every one that I did attend lived up to my expectations and beyond. I look forward to seeing DKU blossom into a beautiful college that thrives through academia in the humanities and art, and a future where we can use our interdisciplinary knowledge to perhaps mitigate the disastrous impact we’ve already had on the planet.