The soccer ball was not always perfectly round. Over time, the soccer ball has changed significantly. In the early stages of soccer, in the middle ages, bladders of pigs were commonly used as soccer balls, and soon after, wrapped in leather to allow for rougher play and longer lifespan on the ball.

The Vulcanized Rubber soccer ball was invented by Charles Goodyear in the mid-1800s, marking the first rubber balls and the first balls that were truly round. This change resulted in a change in regulations in the late 1800s when the English Football Association set the rule that soccer balls should be spherical and be between 27 and 28 inches in circumference (1872). Because of the enduring popularity of the leather soccer balls and the newfound popularity of truly round, rubber soccer balls, a new leather ball was created and produced at a large scale. This new leather ball, which is distinguishable by the large set of laces on the outside of the ball (which are similar to those on an American football) was both leather and truly round and gained a lot of traction in the world, so much so that it was used as the ball in the first World Cup. In the 1950s the ball became waterproof and lost the large laces on the outside, marking the transition to the soccer ball that is most widely used in the modern day. Another result of the removal of laces from the ball was a change in playing dynamics, before this ball headers were fairly rare due to the irregularity of the balls surface, making it potentially very painful to header the ball. Now that the ball was smooth, headers started becoming a more regular occurrence, a phenomenon which continues to this day.

In 1970 the Adidas Telstar was introduced. The Telstar is the prototypical soccer ball, with black and white pentagonal patches all over, which were implemented to make the ball nicely visible on televisions. 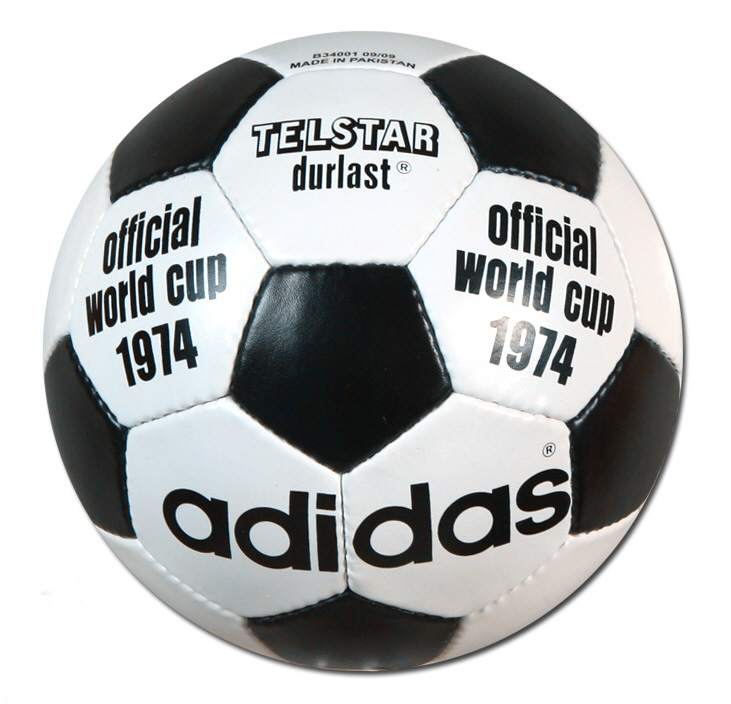 More recently the Brazuca ball that was used in the 2014 World Cup has very few panels and is formed of synthetic material. Lower panel counts give the ball a more consistent surface and give it a smoother, more reliable feel.

The transformation of soccer balls over the ages is incredible and shows how the popularity of the sport contributes to ever advancing technology in the realm of soccer ball technology and the manufacturing processes involved.

One thought on “The Soccer Ball”