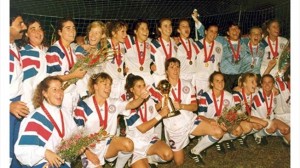 The U.S. team celebrating after they won the 1991 FIFA Women’s World Cup (courtesy of FIFA.com)

These pages will be summarizing the six prior Women’s World Cups that have been contested. An additional page will delve into the origins of the World Cup as it pertains to earlier versions of the tournament as well as similar competitions.

As you can read in these pages, the World Cup has grown from a small tournament with minimal media coverage and public exposure that FIFA did not even want to put their name on in 1991 to the massive cultural phenomenon it is today. The tournament slowly grew before exploding in 1999, when it set attendance and TV ratings records that still stand today. While the tournament has yet to match the mania seen in 1999, in the next three World Cups continued to grow women’s soccer and solidify itself as an important cultural event every four year.

The summary pages have been setup in an easy-to-read fashion. Each World Cup is broken down by group play in each group, the knockout round, and a longer recollection of the final. Because of the nature of this structure, a specific part of any tournament (i.e. who advanced from Group B in the 2011 WWC), therefore, will be easy to identify. Hard and quick facts about each year’s tournament is available as a header on each page.

2 thoughts on “History of the Women’s World Cup”