An interesting story is shaping up in the CONCACAF World Cup qualifying games with two consecutive victories by Haiti. They’ve now followed up a 6-0 trouncing of the Virgin Islands with a 2-0 defeat of Curacao, and are at the top of their qualifying group. 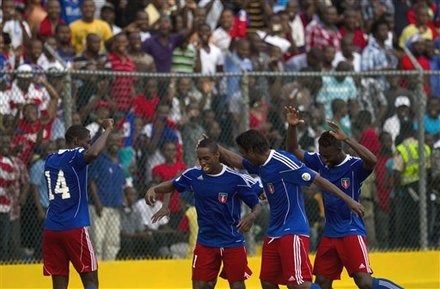 Haitian football has, of course, been through a lot during the past years, including the death of key personnel during the earthquake, a harsh post-earthquake 9-0 loss to the U.S. women’s team in early 2010, and the quarantining of the men’s youth team in Jamaica. They didn’t make it into the Gold Cup this year. But the dreams of Haitian football are still there, always kept alive by the shared memory of the nation’s one appearance in the World Cup, in 1974, and of a particular goal made by Manno Sannon against Italy in their first game.

Haiti lost that game 4-1 and didn’t get out of the group stage: but no matter, Sannon was and is a national hero: one mural portrayed him alongside Jean-Jacques Dessalines, Che Guevara and Fidel Castro in a pantheon of Caribbean heroes. Might a new set of heroes emerge from the national team’s current roster? Already, fans have been delighted by the recent games, a needed respite and challenge to the discouraging news that surrounds them.

James Montague wrote a nice piece about Haiti’s recent trouncing of the Virgin Islands for CNN, alongside a second piece in The National.

Meanwhile Laura Wagner, our intrepid Haiti football correspondent, contributes this narrative of her attempt to see the game with her friends Claudine, G-Love, and a new friend named Jean:

Claudine, G-Love and I arrived at the stadium at about 1:30 pm for the 3 pm match, just as the rain began to pour.  We stood for some time under a street merchant’s tarp, where we bought a little bottle of cheap Roi de Coq rum and chatted as the rain poured down.  Fans wearing Haitian flags and red and blue jerseys streamed down the street, lined with tarp-and-sheet-metal homes, beauty salons, and businesses.  While G-Love ventured off to try to by some more tickets from scalpers, I went and checked out the line, and was stunned to find that it stretched all the way from the stadium entrance up past the Ministry of Public Health.

“We have to go stand in line,” I told Claudine.  She put a plastic bag over her hair, and off we went.

This was smart thinking, as it turned out.  After the rain let up, people moved en masse into the line.  It stretched from Rue de l’Enterrement all the way up Rue O. Durand, up to the Champ-de-Mars.

At least standing in line was not boring.  It was, rather, an active process requiring constant engagement and vigilance.  People wedged their way into any gap in the line, so everyone had to “kole” against the people next to them.  Claudine was pressed against me, while I was pressed against a chubby middle-aged guy in a red T-shirt.

“I’m all up against you and I don’t even know your name,” I told him.

The line moved incrementally.  Vendors hawked water, sodas, ice cream, conch in spicy sauce, fried plantain chips, Haitian flags (both on sticks and in bandanna form), red-and-blue banners with “Haiti Chérie” on them (five gourdes apiece), fresh coconuts, hot dogs, and so on.  “What do you want to eat when we get inside?” I asked Claudine.  Wet from the rain, I was thinking hopefully of a cold beer and a bag of salty plantain chips.  Claudine, G-Love and I bought Haiti flag bandannas, which we tied around our heads. A smallish man appeared to our right.  “The back of the line is no good for me,” he said in a quiet reasonable voice.  “Let me in here.”  We all squished together again, immediately and instinctively, to firm up any gaps between people.

Claudine laughed.  “For whom exactly is the back of the line good, monchè?”

Soon after, we began to notice a lot of police cars, and people began to say that Martelly’s entourage would be arriving any moment.  Sure enough, within seconds the president appeared on foot, wearing jeans and a blue T-shirt and flanked by armed bodyguards.  People cheered and shouted “Martelly!”  He waved and headed toward the stadium. A woman walked down the street, clad head-to-toe in the Haitian flag.  Her head was wrapped in a Haitian flag scarf.  Her dress consisted of two flags.  Her earring were flags.  Even her umbrella was red and blue.  I stopped her to pose for a photo. A bunch of foreigners went straight to a metal gate alongside the main entrance and seemed to get in expeditiously and without hassle.  I was curious about these foreigners and their badges, and how one might get this VIP-blan access.

We moved closer to the stadium, glacially.  As we got closer, we saw men breaking the fence and sneaking through.  A bunch of people in line decided this seemed like a good idea, and hopped out of line to try this new tactic.  Claudine and I stayed in line.

In the end, we, and possibly thousands of others, never made it into the stadium.  As people on the streets said, “Our tickets died in our hands.”  There was so much upheaval and so much shoving that they locked all the entrances to the stadium and began beating people back with police batons.  We don’t know if too many tickets were printed, or if there were counterfeit tickets on the street, or if simply too many people pushed their way in ticketless, but in any case, an awful lot of people who paid for their tickets never made it into the game.  We stood outside as we heard the crowd erupt in cheers with each goal, and bitterly wondered what was going on.  Among that crowd were soccer fans who had gone without food so that they could buy those tickets — those ultimately useless tickets.

As the dezòd mounted and it looked like violence was likely, Claudine and I split.  We found a restaurant with a TV on Rue Capois and watched the second half of the game there.  “Pòdyab Îles Vièrges” we said, sipping our drinks and eating banann pese in peace.  “Poor things.”  6-0 is a pretty sad score.  We were happy not to be at the stadium.

Haiti’s changes of qualifying for the World Cup are, of course, pretty slim. They’re at the top of the group now, and might well hold their position there against Antigua, but the Round 3 of the qualifiers will pose a more serious challenge.

Still, these two victories are nevertheless something significant, and suggest something might be afoot worth following with the team. Last year at the World Cup I saw a few Haitian flags carried and displayed during the games in South Africa, and I know plenty of Haitian fans who would consider it about the highlight of a lifetime to go watch their team play in Brazil in 2014. There would be a nice symmetry to it if, forty years after Sannon’s goal, that happened. If there’s a bit of justice in this world, maybe it will.