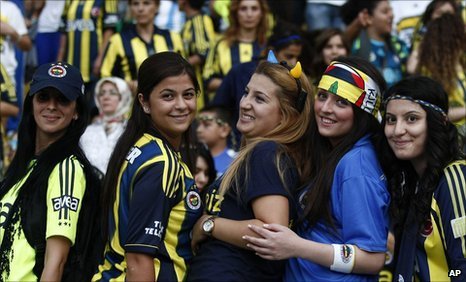 Turkish football authorities have pioneered a remarkable anti-hooliganism tactic: allowing only women and children to watch a game. Initially — after violence and a pitch invasion marred a recent Fenerbahce match — authorities had decided to ban all fans from two games. Then someone instead suggested only allowing certain fans. So it was that over 40,000 women and children packed into the stadium, producing an event that seems like it represented a kind of beautiful alternate reality of fandom. “This is a historic day,” one member of Fenerbahce’s board declared. It’s not clear whether the experiment will be repeated. And yet one can imagine, thrillingly, the example being followed all over the world — at PSG, Liverpool, even the NFL. And why not?

After all, watching this video (shared with me by our friends at A Football Report), you can’t but want to participate in such an atmosphere (even if, like me, you wouldn’t have been allowed to). There is, frankly, something revolutionary about the scene.

I was reminded of a testing joke once shared with me by a friend — a geneticist — who asked: What if there was a chromosome that you could find in the overwhelming majority of violent criminals? What if you could isolate it, and perhaps genetically engineer people to remove that chromosome? An eerie, sci-fi, but intriguing idea. Well, he told me, there is such a thing: the Y chromosome. Take it away, and you’d reduce violent crime dramatically. The Turkish FA had the same insight, it seems: if you don’t have any men around, that solves a lot of problems.

Reading this story, I thought back to the brilliant film Offside, which shows the travails of women in Iran who want to watch football but are banned from the stadium, and so attempt to sneak in dressed up as men. (You can watch the entire film on Youtube, starting with the segment below; I highly recommend it if you haven’t seen it: was actually filmed during an Iran match, essentially under the nose of Iranian authorities who were not aware of the way the film critiqued their policies).

The mirror image offered here between Turkey and Iran, two neighbors, is striking. And the whole story has the brilliant effect of suddenly making us realize that what we think of as natural — the stadium as a largely masculine space, defined by certain forms of behavior — could be changed as easily the strange rules of the game played in the stadium itself.

12 thoughts on “Women and Children First”