There was something oddly consuming about the dullness of today’s France-Romania European Qualifying match. It was played in Bucharest, in front of a packed and energized crowd of Romanian fans, who understood that this was probably the pivotal moment in the country’s attempt to get to the European Cup next year. The legendary, shiny-headed Howard Webb was officiating, lending the match a weighty air. The two national anthems were sung with an unusual verve and passion by snappily-dressed performers — the match commentator exclaimed that Edith Piaf couldn’t have done better with the Marseillaise, and I came away humming the Romanian national anthem thanks to the rendition given by the enthused, tuxedoed singer.

The contrast between the care given to the performance of the anthems and that given to the pitch upon which the match was played, however, was a little startling. It was as if the two teams had been condemned to play on some dusty pitch behind an elementary school in Durham. Clods of grass and dust shot up with pretty much any tackle, and you could almost see Ribery and Benzema stumbling around on the uneven pitch. The French team played well given the circumstances, slowing the game down, keeping possession, showing a tactical calmness and precision that was a relief to see — compared, at least, to the various scenes of panic, disarray, and incoherence that French fans have learned are always possible. 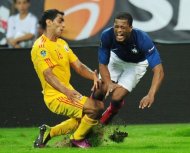 The game had a few brief flashes of interesting play, but they usually ended in some lunging shot off to the side of the goal or a play petering out in the midst of clods of dirt and flying grass. A tussle left Evra’s shirt torn, and it looked slightly piratey and glamorous hanging around his neck. When Samir Nasri was substituted in the 75th minute, after having been kept along with Malouda on the bench for most of the game, you could see him kind of listening to what Laurent Blanc was telling him, while members of the French coaching staff yawned behind him. By the end, between increasingly labored bursts of patriotic song from the Romanian crowd you could almost hear the sounds of tens of thousands sighing as they watched their teams run petering out. They booed and hissed at the end of the game, and it was a depressing sound, since it wasn’t clear against whom it was directed: the Romanian team for failing? The French team for allowing them to? Or just the damned world for being the way it is?

During the game, in one corner of the pitch, a gauntlet of black-clad, SWAT-teamish police with nifty headbands stood at the ready, as if at any moment they might have to burst onto the field with machine guns in a last ditch effort to save Romania’s chances, or maybe to save football itself from oblivion or meaninglessness.

Across the continent, Belgium offered up it’s classic, drippy cold weather to the visiting U.S. men’s team, along with a slightly humiliating stew of a 1-0 defeat. Since I was born in Belgium, I took some joy in the victory — it’s been a long time, I’ll be honest, since I’ve even seen the Belgian team play, and I came away looking forward to doing so again. Still, all in all one didn’t end the game feeling particularly excited about anything.

Elsewhere, at Wembley, football had already offered it’s ugliest side with the killing of a Wales fan. Perhaps, in the end, some blah matches are nothing to complain about: at least no one got hurt. As Jason Davis put it succinctly: “Soccer/Football, you’re a terrible bummer today.”

One thought on “The Blues in Bucharest”