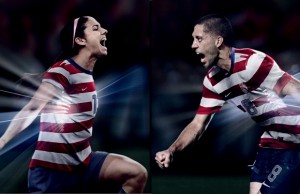 Are Boys Better Than Girls At Sports?

I was a phenomenal heckler. As a child, I used to chirp at my sister, “boys are better than girls at sports!!”. My mother always silenced my arrogance and eventually clarified my perspective. She is more athletic than my father, and shares my interest in professional sports. Any scientific study reveals that women tend to be slower, weaker and smaller than men. Small lungs translates to less endurance and that is undebatable. However, gaining my love of sports from a woman led me to understand that physical difference does not render men “better” than women at sports. Sports have always been a complicated forum for gender issues. Differences in playing styles between the U.S. Men’s and Women’s National teams embody these complexities. While the men may play with more strength, speed and aggression, the more successful women exhibit more control, more strategy and a highly cerebral methodology. See the two showcased in a recent preview of the upcoming women’s World Cup in Canada, released by Fox Sports:

Women’s soccer generates as much national attention every four years as any other women’s athletic event. In contrast, men’s soccer, while popular, does not top the list of men’s most popular sports. Perhaps this is because U.S. women’s soccer is a highly successful organization; no team can boast more success since the inauguration of the women’s World Cup 28 years ago. Why the contrasting outcomes? Here are some differences between the two that may help explain…

1) The men are more aggressive The men’s game is not as gentle as the women’s. Mens players spend more time with the ball and draw more contact from opponents, showcased by their higher penalty rates. Their style is both belligerent and fearless. While women tend to settle for safer passes, men are often seen charging down the field with the ball. According to SoccerNation (2):

“Many American male soccer players are too focused on being great athletes with power, and are not as focused on the more technical aspects of soccer. ”

Speed and strength are key in men’s soccer. The hero of last summer’s World Cup was Tim Howard. The adoration emanating from social media outlets as he miraculously saved goal after goal by contouring his body in ways that seemed impossible, extending for balls that seemed unreachable. His athleticism qualified him the as image of the team. Youngster Julian Green provided the key spark in the U.S.’ rally against Ghana in the round of 16 with his blinding speed. Greatness is quantified by athleticism in mens soccer.

2) The women are more cerebral and technical

In contrast, women display more finesse in their game. Their focus is on technique. Their style resembles European soccer more than the mens game does. Former U.S. player and current coach of the Women’s Professional Soccer League’s San Diego SeaLions Jen Lalor-Nielsen said:

Nielsen suggests a reckless aspect exists with the men’s style. Her comments have merit. The women possess the ball for shorter amounts of time, typically passing after one or two touches. In contrast, the men are always moving to push the ball by themselves. Their second option seems to be passing. However, this is not to say the women cannot be characterized as physical and tough. Brandi Chastain will forever remain an icon of U.S. women’s soccer. She is famous for a photo of her celebrating the 1999 game winning goal of the World Cup, flexing her muscles, shirtless. Still, is the women’s selfless style a more pure form of the game? Retired U.S. defender and current Head Coach for the Miramar College Women’s Soccer team Sean Bowers believes so. He remarked:

“Women are by and large smarter than men…I like coaching the women better, because it’s not all about speed of play. It’s also about formation and the technical side of the game.” (2)

Where the women lack in athleticism, they make up for it with skill. However, is skill more exciting to watch than athleticism? TV ratings would indicate that it is not. Caitlin Fisher writes on the London School of Economics and Political Science website (3):

“Cross-culturally the women’s game is commonly positioned as a weaker, slower, less exciting version of the men’s game  One of my guy friends in college used to call women’s soccer “underwater soccer” because our long balls were shorter, our timing slower, our shots softer, our jumps lower, and our sprints less explosive. But slower, shorter, softer than what?—than the men’s game, of course. Well, so long as the women’s game continues to be positioned as a worse and less exciting version of the men’s game, then certainly people are going to always opt to watch the men.”

This attitude seems to be specific to the American viewing public. International styles of the game more closely resemble the U.S. women’s, rather than the mens, and soccer serves as the most popular sport of the continent.

Consistent with the characterization of U.S. Men’s Soccer present above, the women play towards the interest of the team as a whole more than the men do. Their focus is less on personal success and more on team cohesion. Former goalkeeper at San Diego State University and President of the San Diego SeaLions Lu Snyder commented:

“Men are more individualistic in their approach to the game. Women are more loyal to the team as a whole.” (2)

The men’s aggression outlined above is interpreted by Snyder as selfishness. The women’s passing and patient strategy is reflective of a deeper commitment to the success of the team rather than the individual. Perhaps this is why so many dramatic stars exist in men’s soccer.

4) The women, slower, play with less breaks in the game

As noted earlier, the speed and aggression of the men outmatches that of the women. As a result, their games play at a different pace than the women. According to SoccerNation (2):

“Men’s soccer matches are often interrupted through fouls or aggressive play, and this statistically does not occur as much in women’s soccer.”

The smaller size and slower speed of the women allows them to work with more open space relative to the men. By the same token, their defense is less potent than the mens because of having more space to defend. Their pass-first mentality results in longer periods of possession and more control over the pace of the game. There is a smoother element to the women’s game. The men experience more turbulent possession patterns.

5) Women Are Not Fakers

“Flopping” is very popular in men’s soccer. Faking injuries have seemingly become a fundamental part of the game. Another reason that men experience more breaks in their games is their inclination towards faking injuries. A recent study led by sports medicine physician Daryl Rosenbaum compares this issue between men and women.

He examined a group of supposedly injured soccer players. The researchers wrote in the journal Research in Sports Medicine that only 14 percent of these athletes “met the criteria for a definite injury” and concluded “that women who do go down are twice as likely to be truly injured compared to men who hit the ground.” (4)

The piece continues: “To investigate, he and colleagues started by reviewing video footage of 89 men’s soccer games from four tournaments. The researchers counted a total of 980 supposed injuries. But, they reported last year in the International Journal of Sports Medicine, only about 7 percent of those qualified as definite injuries. A “definite injury” was defined by either visible bleeding or withdrawal from the game.” (4)

Clearly the trend of false injuries is more prevalent on the men’s side. This contrast contributes a sentiment of purity to the perception of the women’s team.

Is faking an injury just another form of team loyalty and determination? Or do the women play with more integrity?

Anson Dorrance, University of North Carolina, Chapel Hill women’s soccer coach believes the latter. He said, “I thought that was a wonderful statement about the way women play the game.”

“Any time a male player is nicked, there’s rolling around, grabbing body parts, trying to sell the ref on some egregious fall to get a yellow card” or other penalties for the opposing team, he continued. “Women play the game with greater personal integrity and honor.” (4)

While the U.S. men’s team outmatches the women’s team in speed, strength and athleticism, women display a superior tactical and technical form. While neither the men nor the women replicate European soccer, the  women more closely resemble foreign styles. The men play with more aggression, and more physicality. In contrast, the women are quick to pass. They experience less stoppage in play and less faking of injuries. The more successful women’s team, who have won two World Cups and four olympic medals, exhibits a more pure playing style. However, with this more technical form of the game comes less excitement and ultimately, in the case of the United States, less popularity. The American pubic has demonstrated an interest in the more physical, more high paced men’s playing style.

The fervent national excitement generated by the men’s team last summer could be replicated and built on this summer in Canada by the women. Soccer has the U.S.’ attention more than it has in a long while.

Put these observations to the test and watch two full games. Here is a recent match between the U.S. Women and the French Women…