So. Every so often in soccer, one of the teams will sub out a player. (It’s a pretty common occurrence, I’m sure you’ve seen it before.) The incoming player and an accompanying referee walk out to the middle of field. That referee has this, kind of pointless, job of holding up a display that shows the departing player’s number and the incoming player’s number. This isn’t the only time that our favorite referee makes it on to TV. At the end of each half, he’ll walk out to the middle of the field (with his trusty board) and show the stadium how much stoppage time remains.

Why this process with the referee and his best friend still happens is beyond me. I think it’s a little unnecessary and could be replaced with existing stadium technology. But hey, it’s probably rooted in history or something like that so who am I to judge? I’m interested in that board. I’ve noticed something about it. 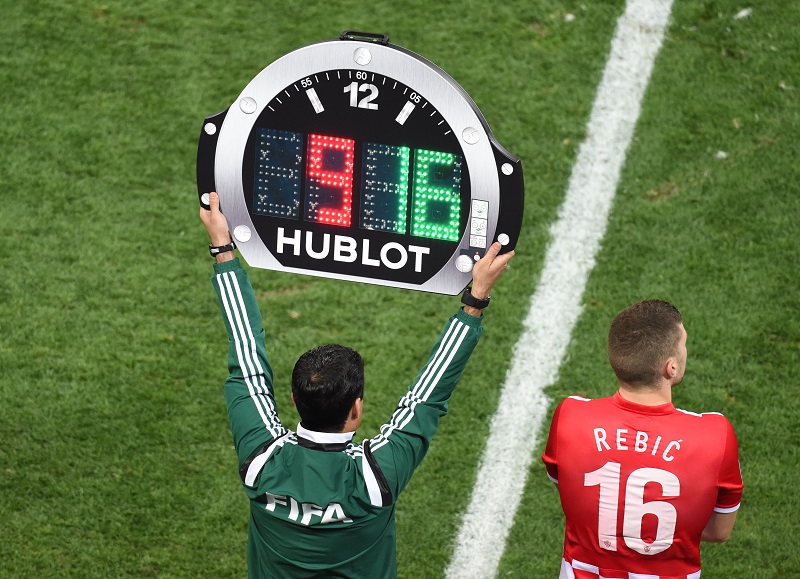 Take a look at this one. 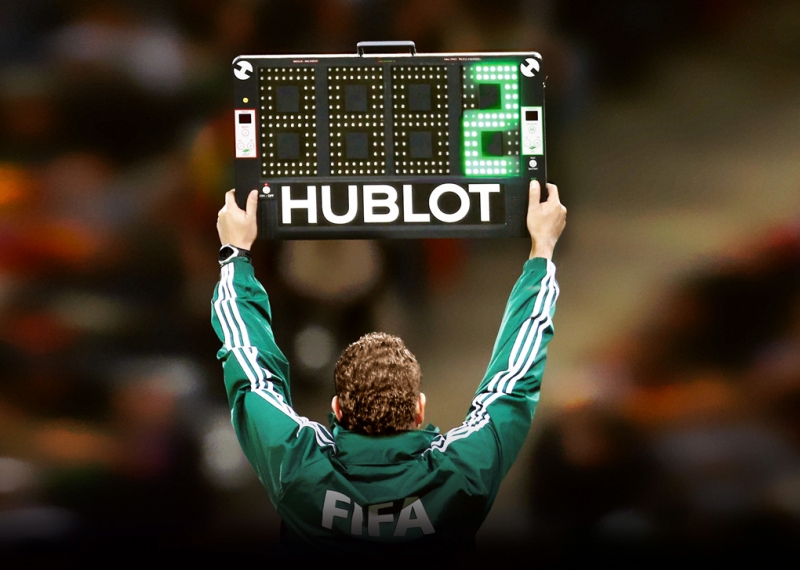 It seems to me like Hublot has something going on with these boards. Naturally, I was interested so I did some googling and found out way more than I needed to.

Hublot is a fancy Swiss watch company. (They have almost three million followers on Instagram so you know they’re legit.) It’s pretty fitting that this is how they’ve found their way into soccer. At least that’s what I think. I had originally hoped that Hublot was so good at making referee boards that they monopolized this niche market. However, I was sadly wrong. They just have a bunch of sponsorship and endorsement deals. It’s similar to how Rolex keeps the match time for tennis tournaments. With that said, the engineers over at Hublot still looked to “revolutionize” the referee board when the time came. [4] Or at least, that’s what they said.

Revolutionizing the board in preparation for their partnership in the 2014 World Cup, was what they called, “a major challenge.” [4] The biggest, most noticeable change is their watch like design. The board looks like a watch, which is pretty cool. (I guess?) Size, weight, and general operation were all up to FIFA so they didn’t have much room for improvement in the first place. Original prototypes weighed fifteen pounds and were made of aluminum. They went back to the labs, creating thermoformed boards weighing less than ten pounds. [4] Hey, every innovation counts. If it wasn’t for all that rigorous research, none of this would have been possible. You can give their blog post a read to learn more. (The link is below, but it’s really not that interesting, don’t waste your time.)

Like I was saying earlier, I had really high hopes when I first started looking into this board and Hublot. I thought they had some miraculous way to make the board, which compelled FIFA to partner with them, but that’s not really the case. It’s just another partnership in the massive sea that is partnerships in sports. Not to mention the fact that you can buy a soccer board on Amazon for as little as $40 so these aren’t even that special. I don’t really know what else to say. Next time you see a substitution or the stoppage time go up, I guess just know that Hublot put some effort into redesigning that board and that its just another sponsorship in the game.

One thought on “Hublot and the referee board.”