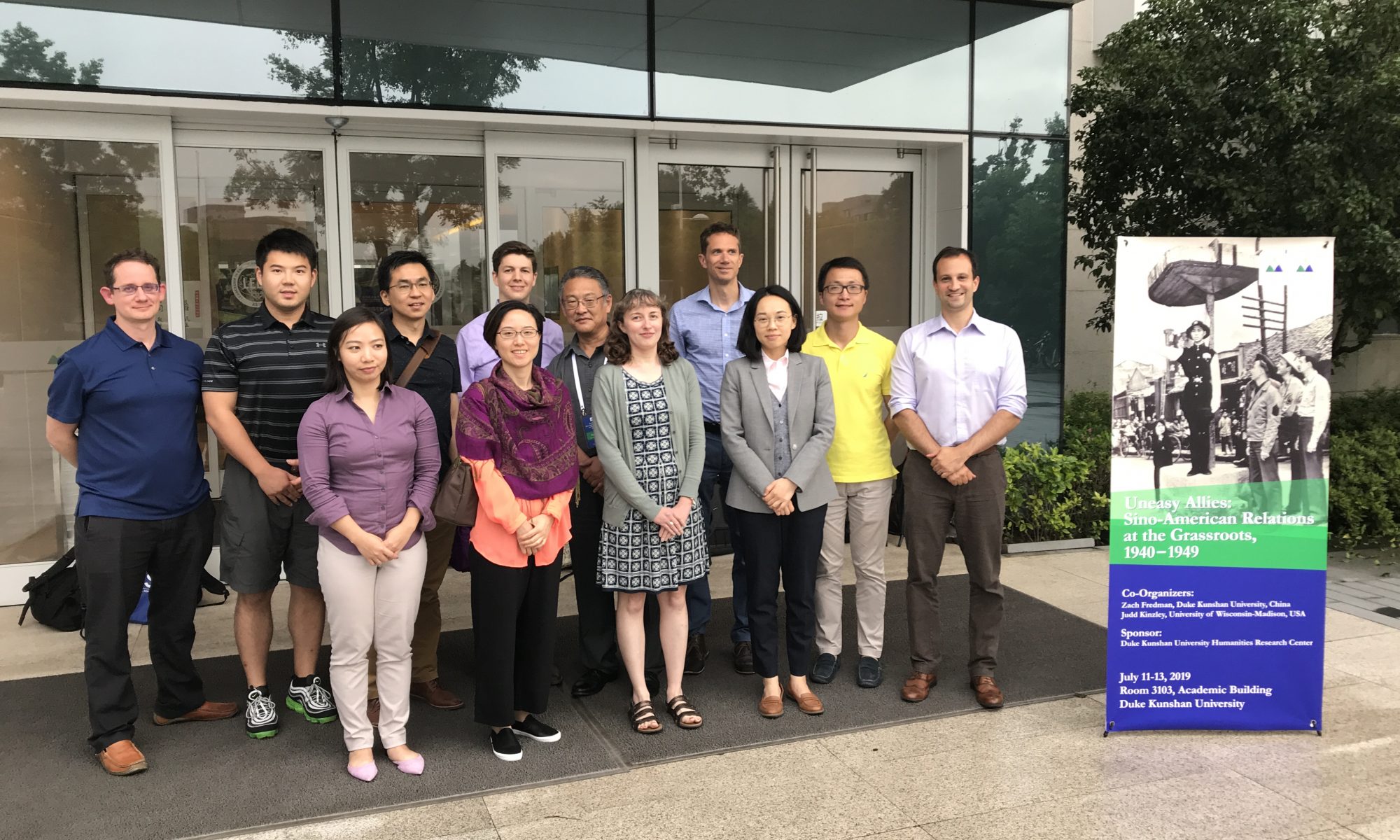 Duke Kunshan University welcomed historians from around the globe to our campus from July 12 to 13 for conference entitled “Uneasy Allies: Sino-American Relations at the Grassroots, 1940–1949.” Sponsored by the Humanities Research Center, this conference explored the wide-ranging encounters between Chinese and Americans in China during this crucial decade. Zach Fredman, assistant professor of history at DKU, co-organized the event with Judd Kinzley, associate professor of history at the University of Wisconsin, Madison.

Conference participants presented their new research on Sino-American relations during the 1940s and discussed how grassroots approaches, rather than top-down narratives that focus on elite politics and military strategy, can enhance our understanding of bilateral relations.

The first panel focused on soldiers. Du Chunmei explored the politics of sexual relations between American Marines and Chinese women between 1945 and 1949. Linh Vu’s presentation, meanwhile, looked at the “biopolitics” of the Sino-US alliance through her study of how US and Chinese military authorities dealt with Chinese war dead in India and Burma. Fredman’s case study highlighted the William K. Evan’s gold theft case, when an American colonel responsible for civil affairs work in Taiwan during 1945 stole half of the Japanese Army’s gold bullion supply and escaped to the United States undetected. Each paper showed how bureaucracy, nationalism, and unequal power relations shaped interactions between Americans and Chinese.

These themes came up again on the second panel, “Soldiers and Activists.” Yang Zhiguo’s work on US Marines in Qingdao showed how college students reacted to American violence against Chinese civilians. The papers by Jack Neubauer and Zheng Yanqiu analyzed the interplay between the state and non-governmental organizations. Neubauer’s presentation drew from his Ph.D. dissertation, which examines international adoption “as a highly contested field of US-China relations.” He passed around letters written by Chinese orphans to their American foster parents in order to draw our attention to the way translators subtly changed their messages to reflect larger political considerations. Zheng described the plight of Chinese students stranded in the United States during the war, while co-panelist Ren Ke examined how American pacifists made sense of the war in China.

The second day began with a panel on technicians, with participants looking and the role of engineering, technology, and corporations in Sino-American relations. Mary August Brazelton’s insightful presentation on the China National Aviation Corporation, and joint enterprise of China’s Nationalist government and Pan American Airways, provided a fresh look at the human, social, and technical ties that constituted the Sino-American relationship while also producing new knowledge about China. And as Covell Meyskens revealed, the Nationalist government and American civil engineers sought to power China’s industrialization by building the Three Gorges Dam, a project terminated in 1947 due to the Chinese Civil War. Zhang Ruisheng’s study also illustrated how extensive cooperation between the International Harvester Company (IHC) and China’s Ministry of Agriculture and Forestry broke down during the Civil War. But as Zhang showed, this partnership had a lasting legacy, as more than a dozen Chinese agricultural specialists who studied in the United States on IHC scholarships went on to play leading roles in Chinese agricultural research, teaching, and engineering after 1949.

The final two panelists investigated the role of natural resources and trade in 1940s Sino-American relations. Judd Kinzley’s archival research in Sichuan and Jiangsu delved into the feathers, hog bristles, and other commodities that China sent back to the United States on the same aircraft that brought US lend-lease aid into China. This wartime material exchange had a powerful and resonating impact. Li Wankun looked at one element of this impact, illustrating the transformation of the tung oil trade during the Second World War.

Participants ended the conference with a plenary session discussing future cooperation. Everyone agreed that an edited volume would help students and scholars gain a deeper understanding of how grassroots engagements during the 1940s had a lasting influence on Sino-American relations and contemporary East Asia.

The conference could not have succeeded without the input and support from numerous people at DKU. Chi Zhang from the HRC helped to organize everything. Connie Zhang and Aimee Yuan from conference planning publicized the event and ensured that participants were well-fed and sufficiently caffeinated to overcome jet lag. Robin Wang provided timely guidance on relevant rules and regulations. Duke Kunshan’s Humanities Research Center aims to establish the university as a leading center of research and international collaboration in Asia. Thanks to our conference participants and support from everyone at DKU, we made a small, but important step in this mission.