How do we love, why do we love, and why do we love the people we love? For the third installment of the series on intimacy organized by the Thursday Night Tea Research Group, Claire Nioche-Sibony walked us through some classical psychoanalytical ideas about love, from Lacan to Freud, and examined love from her perspective as a psychoanalyst who has been practicing for ten years. Currently an assistant professor at the Université Sorbonne Paris Cité, Nioche-Sibony’s research concerns issues of singularity, nomadism, madness and writing, and has drawn on the theoretical works of Derrida, Deleuze, Freud and Lacan, among others.

‘We may know very well that we are

addicted to someone. What is happening then?’ Nioche-Sibony began the talk by explaining how although common imaginations about addiction surround drugs, food, gambling or even sex, we often do not realize the far more pervasive type of addiction- emotional addiction. Harder to recognize, it shapes how we understand the world and respond to it. And why is it that when it comes to love, we keep repeating the same pattern of giddy excitement followed by disillusionment?

‘There is no exact science of love, but psychoanalysis sheds light on our love choices, the repetitive motions of our choices- our failures, joys and losses,’ Nioche-Sibony said of how the psychoanalytical perspective can help us better understand why we make these choices. ‘My definition of my work as a psychoanalyst is to bring her or his [the analysand’s] desire into existence,’ Nioche-Sibony described her working process, ‘And this desire has to be understood as an unconscious desire.’

‘To me, the aim of psychoanalysis is to lead the analysand to free her desire, and by doing so, uncover the truth of her desire’. What one consciously wants and what one unconsciously desires are not the same- so that often we may not be as aware of ourselves as we like to think. So, Nioche-Sibony said, psychoanalysis draws more focus to unconscious slips, what one lets out when accidentally, as possibly being more than one’s knowledge of oneself, for the theory suggests this recognition of unconscious desire is only possible once it has been expressed in speech. ‘In naming it, the subjects create, reinforce a new presence in the world.’

However, articulation of the desire does not quite equate fulfillment. ‘Since the other cannot provide the unconditional love that the subject seeks, the desire is a surplus- a leftover,’ Nioche-Sibony said. Perhaps this is when love becomes difficult. ‘Love is giving something you don’t have to someone who doesn’t want it,’ Nioche-Sibony quoted Lacan. Drawing on Lacan, Nioche-Sibony believes the emptiness we have within us intertwines with love, so that it seems possible and almost necessary to give someone we are not sure we have either.

‘Love is indeed part of my job, for the success of the treatment also depends on the patient trusting me, I would say, or even loving me,’ Nioche-Sibony described the Freudian concept of transference, where the patient transfers all positive and negative emotions associated with a relationship to the psychoanalyst. Nioche-Sibony follows the technique of free association in her therapy, ‘So that the patient can convert repeated behaviour to something remembered- transference love.’

‘My patient’s trust is rooted in the 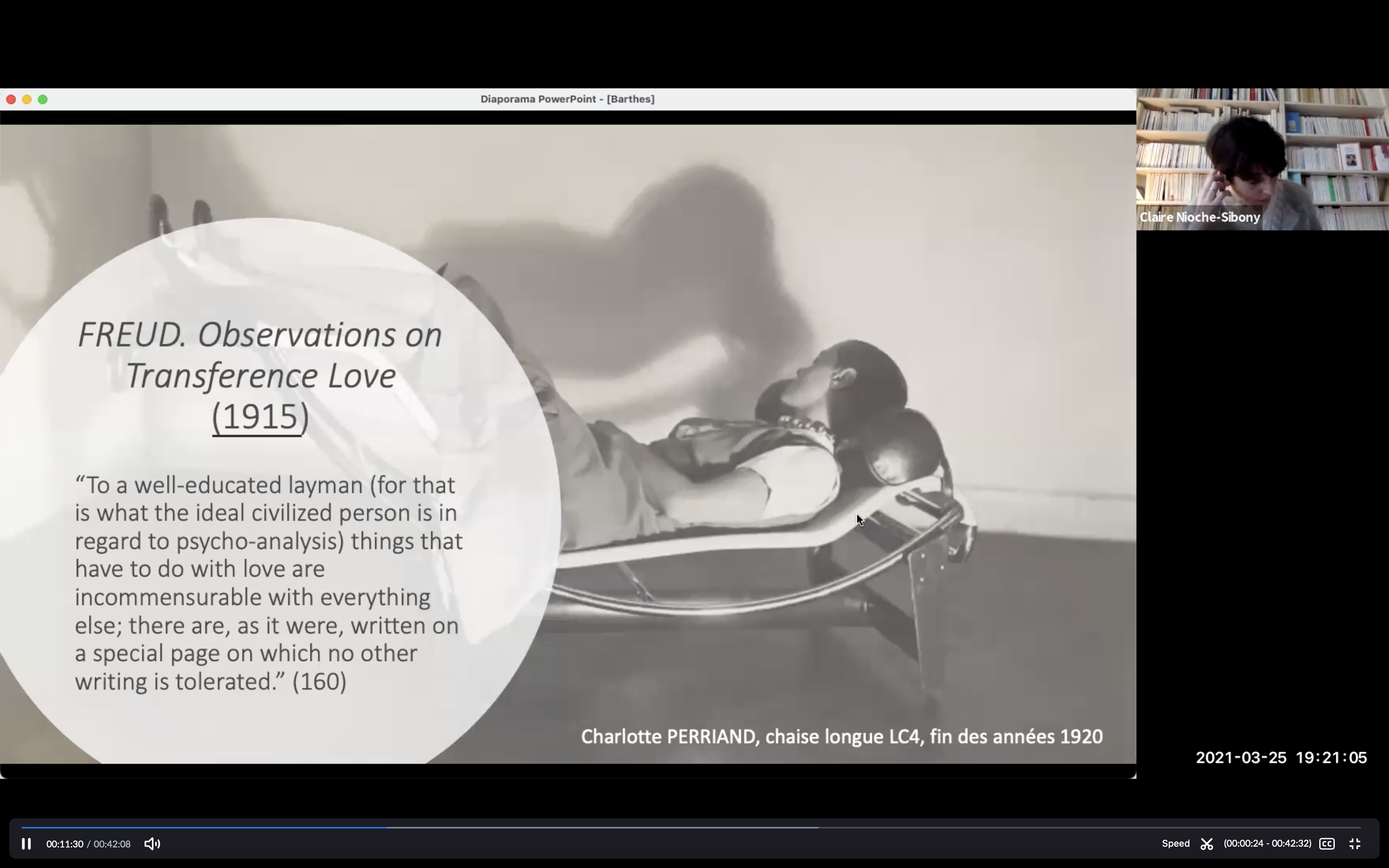 assumption that I know more about them than they do,’ Nioche-Sibony said, ‘For the patient puts his or herself in an infantile position in relation to me’. Although transference is everywhere in daily life, and often it is how we connect to our relations, and Nioche-Sibony pointed out how Freud noted this phenomenon both in patients and other people. But it is when this common behaviour becomes exaggerated that it manifests as a neuroticism. When one’s unconscious need for love is a repeatedly unsatisfied reality, Nioche-Sibony said, ‘There is an anticipation that their libidinal needs will be fulfilled by every individual they encounter.’

What does the psychoanalyst do when faced with such transference love? Neither gratify it, nor suppress it, said Nioche-Sibony. ‘To the extent that the analyst desire itself remains enigmatic, the relationship based on transference may be solved at last.’

Following her theoretical discussion, Nioche-Sibony then directed the group to imagine that they are undergoing analysis, painting a vivid picture of what the process looks like- from light streaming through the linen pictures, to faint noises you might hear from the outside world. ‘I would like you to imagine this for a second. What are the very first words that would come to your mind?’

Referring to Barthes’ A Lover’s Discourse, in which he expands on how a fictional lover might try to identify and be identified by a lover, Nioche-Sibony points out how both a psychoanalyst and a literary critic will be interested in the ‘subjective utterance.’ ‘What is proposed then, is a discursive site- the site of someone speaking within himself, amorously confronting the other loved object, who does not speak.’

As such, Barthes proposes ‘scenes’ of language, which if someone can relate to it, is established as a figure, from how one might experience love as an entanglement of problems and questions, asking oneself, ‘I cannot understand’, or the anxious agony of waiting for love. These scenes do not reveal anything about who the subject is, rather telling us more about what the subject says.

Nioche-Sibony brought the presentation to a close by posing three questions to the participants- What are your own figures to speak of love? Do you believe in magic, that love follows a destiny? And finally- can love be an addiction?