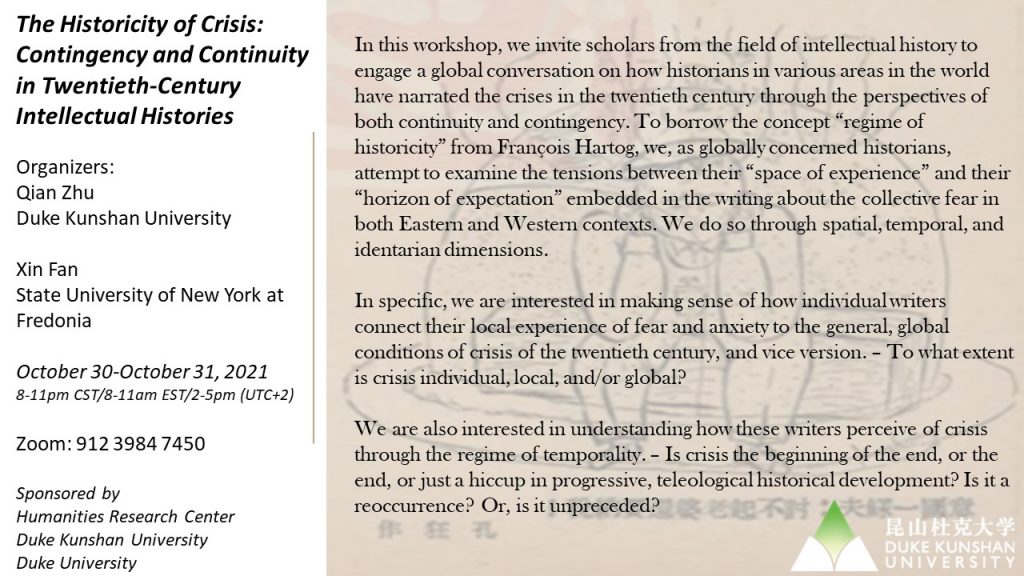 In this workshop, we invite scholars from the field of intellectual history to engage a global conversation on how historians in various areas in the world have narrated the crises in the twentieth century through the perspectives of both continuity and contingency. To borrow the concept “regime of historicity” from François Hartog, we, as globally concerned historians, attempt to examine the tensions between their “space of experience” and their “horizon of expectation” embedded in the writing about the collective fear in both Eastern and Western contexts. We do so through spatial, temporal, and identarian dimensions.

In specific, we are interested in making sense of how individual writers connect their local experience of fear and anxiety to the general, global conditions of crisis of the twentieth century, and vice-versa. To what extent is crisis individual, local, and/or global?

We are also interested in understanding how these writers perceive of crisis through the regime of temporality. Is crisis the beginning of the end, or the end, or just a hiccup in progressive, teleological historical development? Is it a reoccurrence? Or, is it unprecedented?

Keynote: Nationalism and the Crisis of Global Modernity

The Ming-Qing transition in Chinese history as a philosophical problem

Temporalizing the Masses: The Chinese Cultural Revolution as Crisis and Anti-Crisis

A Century of Crisis: Anti-Capitalism from the 1905 revolution in Russia to the Financial Crisis of 2007/8

Prof. Stefan Berger is the Director of the Institute for Social Movements, Ruhr University Bochum, Germany, and Chairman of the committee of the Library of the Ruhr Foundation. He is Professor of Social History at the Ruhr University. He specializes in nationalism and national identity studies, historiography and historical theory, memory and museum studies, comparative labour studies, and the history of industrial heritage. From 1985 to 1987 Berger attended the University of Cologne, where he studied history, political science and German literature. In 1990 he graduated with a PhD from the University of Oxford, with a thesis on “The Labour Party and the SPD. A Comparison of their Structure and Development and a Discussion of the Relations Between the Two Movements, 1900 – 1933”. He was a lecturer in Modern European History at the University of Plymouth in 1990/91, and from 1991 to 2000 he lectured (from 1995 as Senior Lecturer) in the same field at the School of European Studies, University of Wales in Cardiff. From 2000 to 2005 he was Professor of Contemporary History at the University of Glamorgan. From 2005 to 2011 he was Professor of Modern German and Comparative European History at the University of Manchester, UK. A significant part of Berger’s research and works is on the nationalization of history. Berger was instrumental in the programme ‘Representations of the Past: The Writing of National Histories in Nineteenth and Twentieth Century Europe (NHIST)’ that the European Science Foundation organized between 2003 and 2008.

Professor Leigh Jenco is Professor of Political Theory in the Department of government at the London School of Economics and Political Science. She (BA, Bard College; MA and PhD, University of Chicago) joined LSE in 2012, after teaching at the National University of Singapore. She has held visiting positions at the Institute of Modern History, Academia Sinica, Taiwan; the Department of History, National Taiwan University; and the University of Heidelberg. She currently serves as associate editor of the flagship journal American Political Science Review and principal investigator for the Humanities in the European Research Area grant project “East Asian Uses of the European Past,” funded by the European Commission. Her current book project, Cosmologies of Difference on the Taiwan Frontier: Chinese Colonial Discourse in Comparative Perspective, works across the disciplinary platforms of political theory, global intellectual history, and Asian studies to examine how Chinese and Dutch writers grounded distinctive justifications for colonial rule on the island in the seventeenth and eighteenth centuries.

Associate Professor in History of Tsinghua University, China. His research includes history of modern Southeast Asia, global history, and history of China-India relations in the 20th century. He is the author of From Policemen to Revolutionaries: A Sikh Diaspora in Global Shanghai, 1885-1945 (Leiden: Brill, 2017).

Professor Yang Zhang (BA. MA. Tsinghua University; PhD in Sociology, the University of Chicago) is Assistant Professor at the School of International Service at American University. His research covers the areas in comparative historical sociology, political sociology, contentious politics, political networks, and philosophy of the social sciences. His book project examines the emergence and development of large-scale religious and ethnic rebellions in the Qing Empire of China during the mid-19th century. In other projects, Prof. Zhang studies networks of political elites and environmental activism, both in the context of contemporary China. He has published articles in Journal of Historical Sociology, Mobilization, Voluntas, and Research in Social Movements, Conflicts, and Change. Dr. Zhang has won the Distinguished Contribution to Scholarship Dissertation Award in 2017 from American Sociological Association’s Section on Collective Behavior and Social Movements. At SIS, he teaches courses on Empire, Bottom-Up Politics, Contentious Politics, and Comparative and Global Governance.

Professor Xiaohong Xu (PhD, Yale) is Assistant Professor of Sociology at the University of Michigan. His research lies in the intersection of comparative historical sociology, cultural sociology, and political economy. He has investigated and published on patterns of contention in revolutionary China as well as state formation in early modern Europe. He is currently completing a book manuscript, entitled “The Great Separation: The Chinese Cultural Revolution and the Political Origins of Our Time”, that examines the political semiotics and political economy of the Chinese Cultural Revolution in order to understand how the event has shaped contemporary depoliticization hegemony in China and its relationship with global capitalism. Meanwhile, he is beginning a new project on tech innovation and class formation in contemporary China.

Tong Lam is an Associate Professor in the Department of Historical Studies and the Graduate Department of History at Toronto University. His research areas include the modern and contemporary history of China, science and technology, politics and aesthetics, cities, and empire. His first book, A Passion for Facts: Social Surveys and the Construction of the Chinese Nation-State, 1900-1949(2011), analyzes the profound consequences of the emergence of the technologiy of the “social fact” and social survey research in modern China. As a visual artist, he uses photographic and cinematographic techniques to dissect contemporary China’s hysterical transformation, as well as Cold War ruins around the world. He has published a photo-essay book, Abandoned Futures (2013), and has exhibited his work internationally.

Professor Xin Fan (PhD, Indiana) is Associate Professor of History at the State University of New York and Book Review Editor of China and Asia: A Journal in Historical Studies. His research includes Chinese historiography, historical theory, and global history. In collaboration of Professor Almut-Barbara Renger at Free University Berlin, he coedited of Receptions of Greek and Roman Antiquity in East Asia (Brill, 2019). His manuscript, entitled World History and National Identity in China: The Twentieth Century will be published by Cambridge University Press in February 2021.