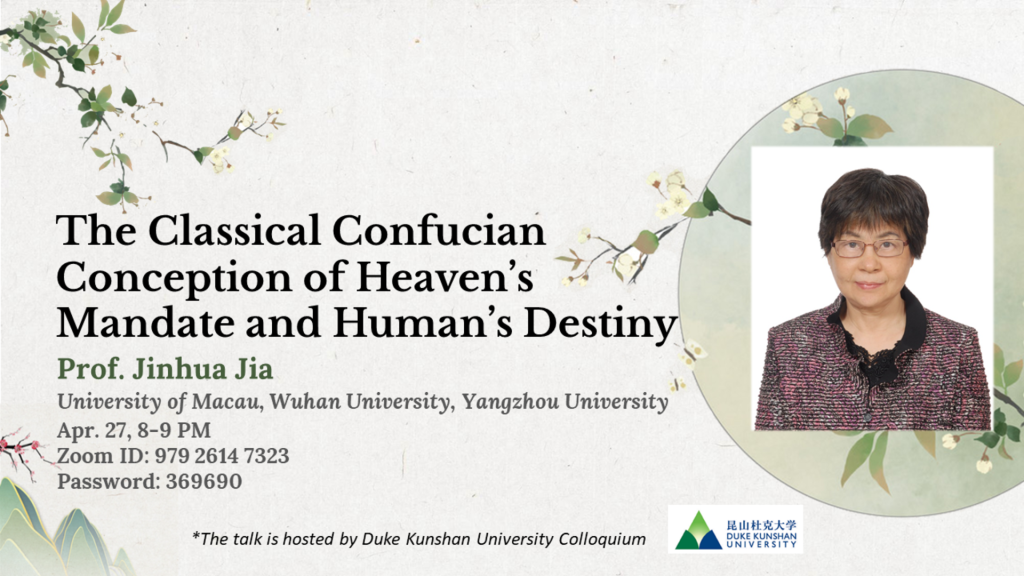 The belief in heaven’s mandate (tianming 天命) in early documents referred to divine-ethical sanctions of political rulers. It later developed multiple implications such as an individual’s destiny or fate and became one of the most fundamental concepts in Chinese intellectual and cultural history. In modern times, this concept has received long-lasting attention in the field of Chinese philosophy, and almost all major scholars have more or less been involved in discussions and debates, especially on the topic of the classical Confucianism’s (gudian ruxue 古典儒学) conception of heaven’s mandate. In this speech, we will discuss this old issue from a new perspective of viewing the classical Confucian conception of heaven’s mandate as their reflections on individual existence and self-realization under the constraints of mandate or destiny. We will examine the texts associated with Confucius 孔子 and Mencius 孟子 such as the Analects (Lunyu 论语) and the Mencius (Mengzi 孟子), as well as some recently unearthed texts, and see how early Confucians accommodate individual initiative and self-determination of life choices through their conceptualization of heaven’s mandate. To them, the vocabulary of heaven’s mandate empowers individuals, especially through situating their places in society and the cosmos. By knowing and standing firmly on one’s mandate or destiny, the individual not only realizes the value of their existence but also goes beyond the ultimate destiny of death. This fresh reading of heaven’s mandate is grounded in the context of the development of Confucian ideas in the early period and presents an optimistic vision of Confucian humanism.

Jinhua Jia, PhD from University of Colorado at Boulder, is Adjunct Professor at University of Macau, Research Professor at Wuhan University, and Chair Professor at Yangzhou University. She had been Member of Institute for Advanced Study (Princeton), Fellow of National Humanities Center (USA), Research Associate of Harvard Divinity School, and Professor of Hong Kong Polytechnic University, City University of Hong Kong, and Xiamen University. Her research interests include Buddhist studies and traditional Chinese religion, philosophy, and literature. She is the author of many books and articles, including The Hongzhou School of Chan Buddhism in Eighth-through-Tenth Century China (SUNY 2006), Study on Classical Chan Buddhism (Oxford UP 2010, Kyūko Shoin 2018), Gender, Power, and Talent: Daoist Priestesses in Tang China (Columbia UP 2018), and From Ritual Culture to Classical Confucianism (Oriental Publication Center 2020).