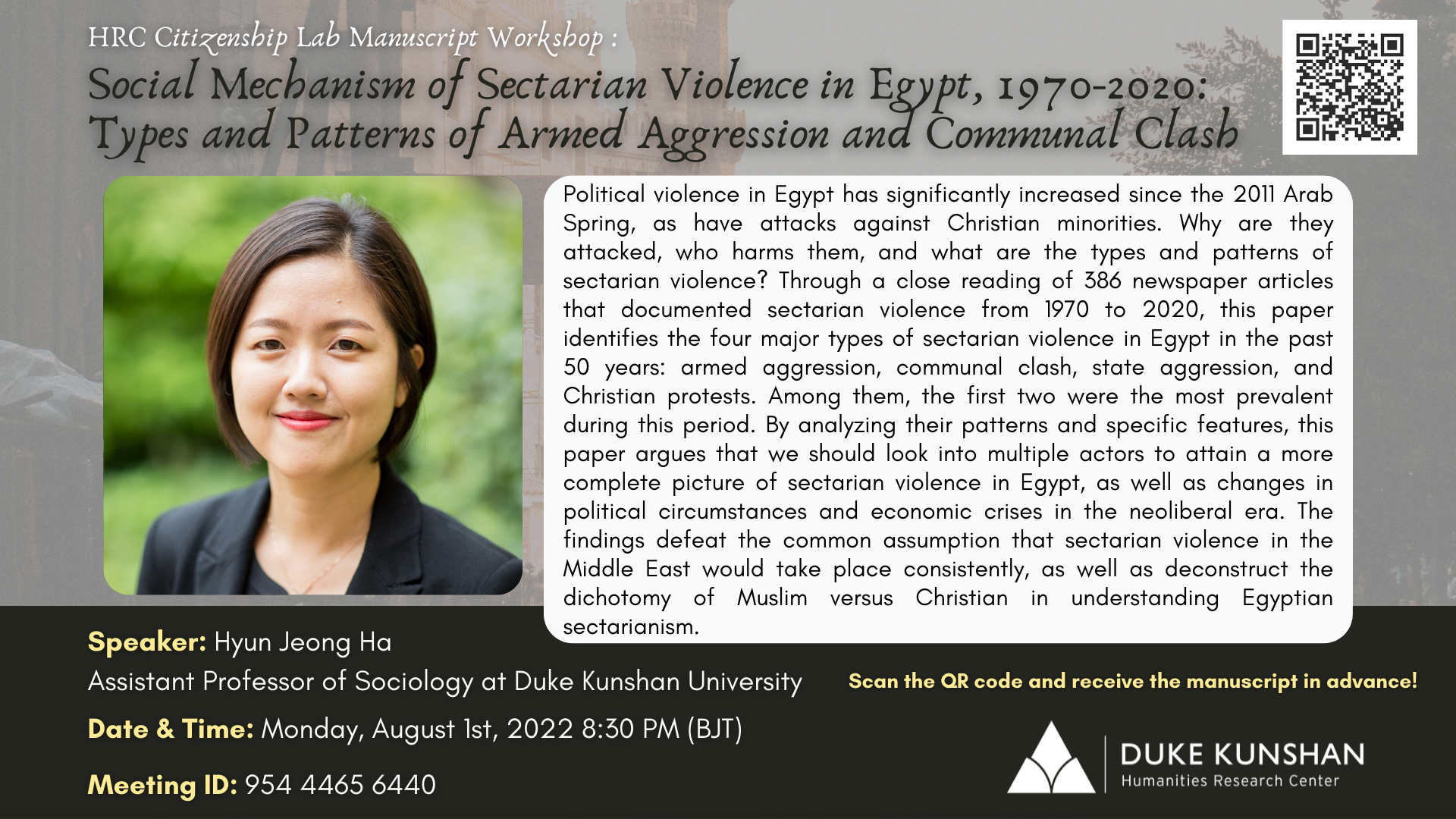 Scan the QR code and receive the manuscript in advance!

Political violence in Egypt has significantly increased since the 2011 Arab Spring, as have attacks against Christian minorities. Why are they attacked, who harms them, and what are the types and patterns of sectarian violence? In this workshop, Professor Ha will share her recent research paper that will be part of her book manuscript. Please feel free to join us to discuss her work.

Abstract: Political violence in Egypt has significantly increased after the 2011 Arab Spring, as have attacks against Christian minorities. Why are they attacked, who harms them, and what are the types and patterns of sectarian violence? Through a close reading of 386 newspaper articles that documented sectarian violence from 1970 to 2020, this chapter identifies the four major types of sectarian violence in Egypt in the past 50 years: armed aggression, communal clash, state aggression, and Christian protests. Among them, the first two were the most prevalent during this period. By analyzing their patterns and specific features, this chapter argues that we should look into multiple actors to understand a more complete picture of sectarian violence in Egypt, as well as changes in political circumstances and economic crises in the neoliberal era. Sectarian violence is much more about contentions between Christians and Muslims, and multiple actors are complicatedly involved in this: the state, anti-government insurgents, armed criminals, and sometimes ordinary Muslims. Besides, political repression of the Muslim Brotherhood and insurgents in the 1990s has increased the number of attacks against Christians. Finally, the economic downturn with Egypt’s entrance into the neoliberal economic order in the 1980s deteriorated Christian minorities’ status gradually over the years. The findings defeat the common assumption that sectarian violence in the Middle East would take place consistently, as well as provide its dynamics more comprehensively.

Biography: Hyun Jeong Ha is an Assistant Professor of Sociology at Duke Kunshan University, a political sociologist, and an ethnographer. Her research lies at the intersection of sectarianism, violence, citizenship, and the daily resistance of religious minorities in the Middle East. Her current research examines how regime transformation and subsequent changes in political and social climate after the 2011 Arab Spring have affected Christian-Muslim relations in Egypt. Egyptian Christians are in a unique situation as citizens. Although the Egyptian Constitution recognizes them as full citizens, they have limited rights in law and its practice. They have been largely underrepresented in various sectors of Egyptian politics and society. Ha’s research expands our understanding of how citizenship works for religious minorities in authoritarian regimes, including how these minorities cope with their limited rights and daily sectarian interactions.