The intensification of global warming and the slow rate of effective state-led efforts to reconfigure economies and socio-cultural systems away from unequal growth and wasteful consumption, have driven communities around the world to imagine ways of living justly with each other and other life forms. 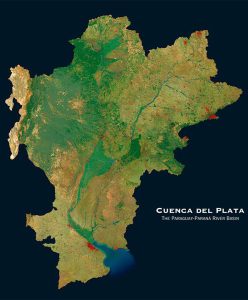 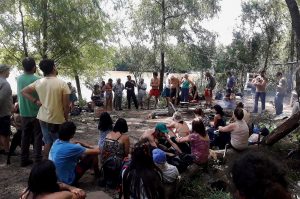 The Paraná wetlands connect people, economies and ecologies in Argentina, Paraguay, Brazil, and Bolivia, providing irrigation and transport for the largest soy producing region on earth (the so called ‘republic of soy’). The Paraná has also become a flashpoint in Argentina for thinking about the relationship of ecological sustainability to social justice, and both in relation to accelerating climate change and extractive industry.

Mapping extractivism: The metabolic circuit of soy from Argentina to China

Extractivism is a core logic of the global order associated with inequitable economic activity and social and ecological violence. It has been a major axis of debate around questions of development, ecological and social justice in 21st century Latin America, and has inspired new (post-extractivist) imaginaries. Those who suffer disproportionately from extractivism are on the front lines, but the front lines are changing and do not reduce to simple centre-periphery dichotomies. As a result, it can be difficult to appreciate the global fault-lines of extractive industry. How can we represent the transnational nature of extractive flows and their biocultural impacts? How might these maps allow us to redesign territories to create better capacities for resistance and solidarity? 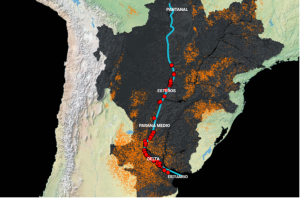 Casa Río has developed interactive maps to represent entanglements of social, economic and ecological factors relating to soy production in the Paraná wetlands. https://map.casariolab.art/ The maps encourage us to understand the Paraná River and soy production beyond the ontological boundaries of nature and culture and the political boundaries of national borders. Data already mapped show inter-relationships among extractive industry, distributions of wealth and violence, and diverse environmental conditions. 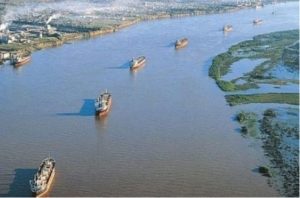 Our research seeks to extend these existing maps of extractivism by following soy from Argentina to China where it is elaborated into a range of products, including pig feed, oil and other foods. China has become Argentina’s second largest trade partner on the back of the two-way trade of agrichemical imports and soy exports. The two sides of this trade create a metabolic circuit: chemicals to sustain high crop yields; food to sustain pigs and humans. This circuit in turn generates numerous impacts across the ecosystems, human communities, and political and economic networks connecting Argentina and China to the global economy and the biosphere.

By mapping the metabolic circuit of soy extractivism, we aim to visualize relationships among natural and social systems and forms of violence and value associated with monoculture agriculture that may not otherwise be apparent. In rendering visible these relationships and expressions of violence – relating to habitat loss, contamination, emissions, distribution, access, control and use of nature, wealth derived from it, and labor relations – we hope to inspire new political imaginaries for cooperation, ecological and social justice. 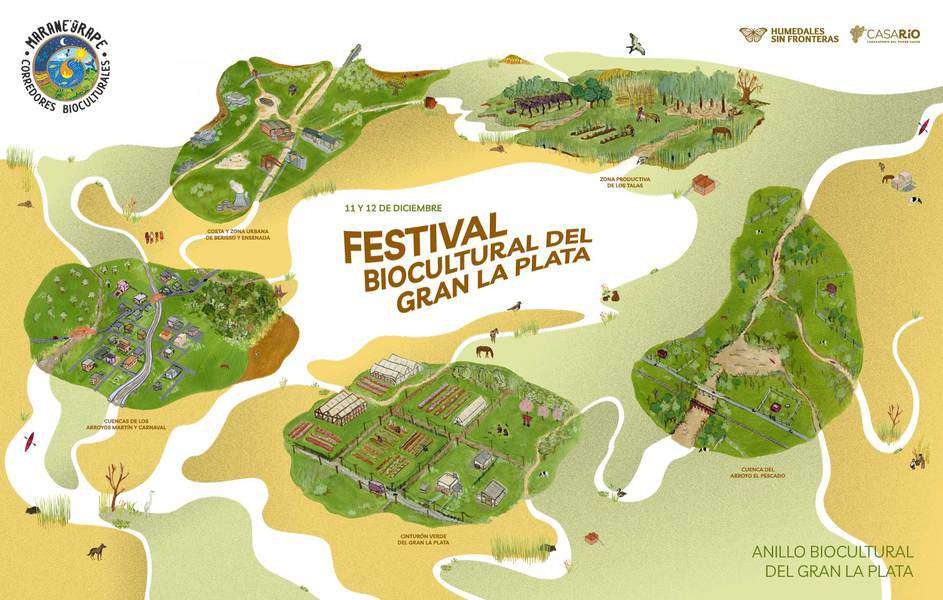 The second aspect of this project situates Casa Río as a transition initiative and combines ethnography with comparative analysis to understand efforts to extend citizenship beyond the human. Transition initiatives respond to the realization that the current global capitalist order, grounded on a dualistic ontology that divides nature from culture, is environmentally and socially destructive. Transition projects consider a number of questions including: How might we re-imagine territory for human and nonhuman communities out of appreciation for planetary life, social injustice, and bioregional specificity? What might these territories look like, and what sorts of relationships will enable them?

Casa Río is one of many organizations around the world working through these questions. By bringing Casa Río’s work into conversation with other transition design projects, we seek to contribute to theoretical and empirical discussions of the possibilities and challenges of more-than-human forms of citizenship. At stake in extending citizenship beyond the human is how to understand the relations among life forms – the bio, the cultural, the planetary – and how particular framings of life and agency might enable more just and sustainable ways of living.

We seek to chart the ways that people involved in Casa Río’s Territories of Collaboration and Biocultural Corridors projects understand relations among the human and other forms of life and between social and environmental agency and justice. Territories of Collaboration and Biocultural Corridors are guided by the questions ‘Who designs the territory? For whom is the territory designed?’, and by the concept of bioculturalidad (bioculturalism). Bioculturalism is a paradigm for understanding the coevolution and interdependence of biological and cultural diversity, and a way of reterritorializing political relations and notions of community and possibility. The basis of bioculturalism is the open-ended nature of relationality, which enables people to make and remake bioculturalism in ways relevant to their local political, economic, cultural and environmental histories. Bioculturalism has become an organizing principle for integrative approaches to heritage, sustainability, urban regeneration, and food production, and for organizations working at different scales including the United Nations Convention on Biological Diversity, Terralingua, Plataforma Biocultural, La Trajinera del Conocimiento, and Casa Río. Bioculturalism is one variant of bioregionalism, a union of direct democracy and ecology, which combines horizontal community and citizenship building mechanisms with environmental design and advocacy. Out of this fusion of the ecological and the democratic, bioculturalism may generate novel forms of citizenship that reframe rights, community, agency and communication in non-anthropocentric terms.

This project is co-sponsored by the Humanities Research Center and the Center for the Study of Contemporary China.

Robin Rodd is an Associate Professor of Anthropology at Duke Kunshan University. His research explores the politics of memory in relation to representations and performances of rights and citizenship in Argentina, Uruguay, and Australia. Drawing on the analysis of memorial practices, museums, and diverse forms of civic action, Rodd examines how constructions of the past legitimize specific notions of citizenship, and ways of imagining one’s responsibility to others. Rodd is currently researching the diversity of ways that people imagine shared responsibility for, or implication in, the production of past or ongoing suffering, human and otherwise.

Aisha Shen is from Class of 2024 at Duke Kunshan University majoring in Cultures and Movements with a Track in Sociology. She joined Prof. Rodd’s Casa Rio Research in May 2022 as a Research Assistant. Her primary responsibilities are contributing to the expansion of Casa Rio’s map of the biocultural relations and processes associated with the extraction of wealth from soy, as well as creating an annotated bibliography of scholarly work on bioculturalism and an annotated list of organizations that draw significantly on this framework.