The blog/website I chose is SB nation. SB nation is a website that offers viewers virtually unlimited information on sports. The site offers a wide variety of team sites also that allows fans to keep track of their favorite teams and players. I chose the page Bitter and Blue which is a page dedicated to Manchester City. Man City is a very historic team that has seen success in recent years. Some of the posts on the page are written by the editors but there are also a high number of pages that fans contributed. The site is designed but like our class site in that individuals can create pages and then other people have the ability to contribute and include their own perspective in comments.

The page is filled with all types of different posts. Whether it be a recent match summary, trade rumors, or injury reports fans have the ability to read and post about anything that is going on with the team. This site is a great resource for the casual fan as well as the die hard “Citizen”. Fans really take advantage of the comment section. The comment sections allow the fans to create a meaningful dialogue about the team. This allows the fans to be involved and interconnected with one another. The language used in the posts is usually very decipherable even for the distant of soccer fans. As long as you can understand the “pitch” refers to the playing field you should be alright. Because this is a site basically run by the fans the language is also very relatable. Some sports writers often get carried away with trying to be too precise and formal. The Bitter and Blue posts are enjoyable and very conversational.  Even though the language is very casual it is immediately obvious that these people know what they are talking about.

There are multiple sections to this fan page that allow its visitors to enjoy it even more. The “Fanpost” section is the section where the fans have the opportunity to create their own posts. The “Fanshot” is in my opinion the most interesting section of the site. This is where fans post links to other articles and sites that pertain to Manchester City. This allows fans to keep up to date with their team through other mediums instead of just the SB Nation site. This section also allows individuals to post videos and clips, which in my opinion are sometimes more entertaining than the articles. The site also offers a schedule as well as a complete roster for the viewers that may just be browsing.  Another great aspect of the site is that it has a “Sections” section. This is where some of the posts are archived and fans can easily visit posts for prior years.

Going through posts from the past couple days I found one that was pretty interesting. While most of the posts were about recent match results this article was about which players should start in their upcoming match against Chelsea. This article is particularly interesting because this gives the fans a sense of power. Having fans think about a potential lineup and how they would approach the upcoming match allows them, in a sense, become more than just a fan. In their mind they become the manager, they become Pellegrini (Man City’s manager).  This notion reminds me of the FIFA videogames in which fans have complete over the lineups as well as the players. The editor gives his opinions on the possible lineups. He gives possible scenarios based on the availability of players due to injury and other reasons. At the end of the article he includes a link to a podcast in which he talks about the upcoming match. In my opinion this is great because it allows fans to get a more in depth analysis of the upcoming match (Link to podcast). Here is the link  to the original article.

My experiences with this website have been nothing but positive. This is a great tool for any fan of the game, especially to follow your favorite team. The Man City page was very positive, encouraging, and welcoming to fans. It seems that there is a well-established fan base that communicates through the posts on these pages. This fan interaction is, in my opinion the greatest aspect of the site. The posts offer anything a true “Citizen” could desire. 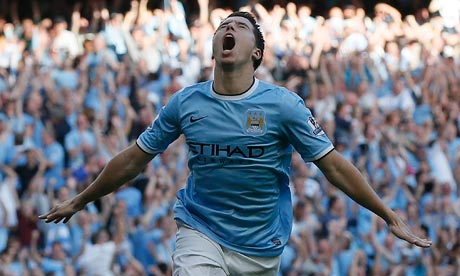