When I used to visit India quite frequently as a child, the focal point of the sports culture revolved around cricket. No matter what street you were on or what field you were playing at, cricket always established an entertainment culture to the population. India, though a dominant world player in cricket (winning multiple world championships), continues to develop its youth and adult soccer leagues in order to strengthen the market for entertainment. Being ranked 171st in the world, India turns to one of its former national coaches, Englishman Stephen Constatine, in order to turn its program, culture, and market into a huge world factor.

Stephen Constantine was a former English soccer player who played in the United States and played until the age of 26 and was forced to give up playing the game due to a knee injury. Constantine started his national coaching career in Nepal and eventually coached the India National team from 2002-2005. However, India did not have too much success on both the national and international scenes. Thus, the new Indian super-league was created to draw in players such as Alessandro de Piero from Italy. Record-setting attendances followed the creation of the 8-team super league, as hope for a developing soccer market continues in the eyes of many Indians.

On March 12th, India faces Nepal (ranked 180th in the world) in a huge game for the 2018 World Cup qualifying. Constantine continues to provide a newfound hope as he states that he has kept an eye on the India national team since his first go with the squad. He aims to improve medical care for the players as well as putting them in intense training conditions, much to the like of the British. He continously argues that India is not nearly in the position they need to be; however, with a cooperative effort between players, coaches, and all other members of the organization, India can get on the international map. Given the long history between England and India, it may be ironic that India turns to an English coach, but in a time where soccer continues to emerge in the entertainment industry, and with India’s developing economy under new leadership, it makes sense that now is the perfect time for India to establish itself in the international realm amongst the great soccer powerhouses. With Constantine’s good reputation in the coaching spectrum, I only see a positive step forward for this team, going in to the March 12th game with Nepal. Though India may not qualify for the next world cup…or two… I see a transitional period with more money being poured in to the soccer system in India. Now, when I return to India, I expect to see more soccer fields, more youth academy programs, and maybe, just maybe cricket may slowly be overshadowed by the emergence of soccer in India. 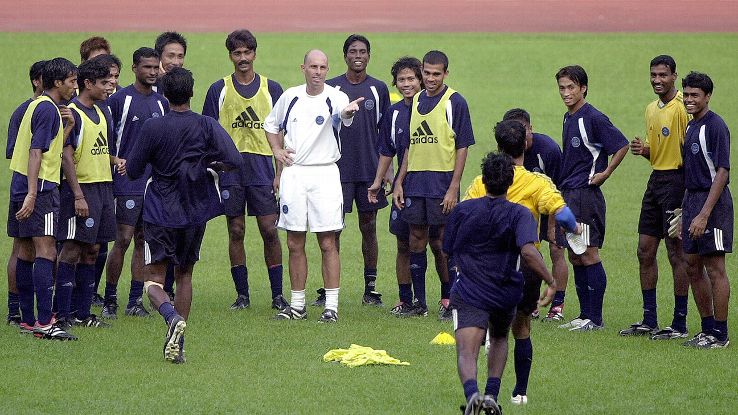 One thought on “India: Back to its English roots”