Maggie began this session by introducing her contribution to the documentary. “There exist two kinds of producers,” said Maggie, “the first kind invests money and contributes nothing else; the other kind works on every part of the production.” As a producer of the second kind, Maggie made sure everything in the movie was working — communicating with organizations, companies, and individuals about their appearance in the documentary, and proofreading the translation and edits made to the film. The production took four years in total. With almost everything done by only a team of three people, the success of the documentary is unbelievable. She also shared that she was majoring in nano-science, though ended up working in filming industries.

Below is the Q&A session with Maggie Li:

Is it hard to get filming permissions from companies, locations, and individuals?

“The short answer is: difficult it was,” said Maggie. She actually cried a lot because of barricades that she encountered when asking for permission to document in organizations. The way to go around them was professionally reaching out to a relevant apartment of companies, or seeking help from her friends. A tough but effective strategy was cold-calling the organization’s time after time. Even calling those who rejected her – waiting until they were in a good mood actually worked well. In such a process, she luckily made friends with the manager of the Trump hat factory they shot in the documentary, who later helped them approach many organizations.

As shown in the documentary, the filmmakers chose to stand silently behind the lens. What does the director of Ascension, Jessica Kingdon, think of your presence as a producer on the workers and speakers?

Maggie introduced the term “observational documentary”, the category of documentary aiming to record realistic, everyday life without intrusion. As one observational documentary, Ascension aimed at minimizing filmmakers’ influence on scenes at their best. They just stayed far enough from those they screened — they had to get back to work, as usual, otherwise, they would not be able to earn a living. When it is a crowded screening, with no one screened for a long time, no need to tell everyone individually that they were going to screen. Asking a worker “How do you usually work?” will never be as realistic as standing back and filming them.

Regarding the documentary’s topic, Ascension 登楼叹, originally a Chinese poem written by the director, Jessica Kingdon’s ancestor, Zheng Ze (1882~1920), what is the director referring to in this topic?

Maggie mentioned that Kingdon is a Chinese American born in the US, who had always longed to screen in China as an ancestor tracing trip. Before the production of the documentary, she went to visit some remote relatives in Changsha and noticed her ancestor Zheng Ze’s poem Ascension登楼叹, a classic Chinese poem describing his sentiments of a high building looking down on the situation of imperialist powers surrounding China. She also noticed several modern slogans of the China Dream. Connecting these two things together, her thought of documenting the current situation in China arose. Initially, the director aimed to film the fast development of Chinese society. However, Kingdon best decided that “collecting all footage approachable as a resource.” They eventually ended with a depiction of an image of a huge gap between the rich and the poor, with both classes driven by material pursuits, leaving no room for spiritual beings like the “Chinese dream.” Besides, as Maggie mentioned, this documentary aimed not only at the irony toward the contrast between the Chinese dream and its reality; it also depicts the irony of capitalist fabricated ideals globally.

Also due to the “all is fish that comes to the net” spirit of Kingdon, a lot of things were “randomly happening,” said Maggie. That was why the whole process was interesting: Jessica was not as rigid as many other directors: She enjoyed uncertainty. Everything they encountered made their work surprising and meaningful.

Could you talk about why your documentary only pictured people from the low-class and upper-class. Why is the middle class missing?

Maggie responded that they did not include lots of middle class because it was hard to feature those middle classes working in offices, as such scenarios may become sort of globally similar. Instead, it  featured the transition towards the middle class instead of those that have already become. People are trapped in the gap between classes. She ended the Q&A session by saying that the most interesting thing was getting behind the camera and seeing what is behind the common scenes, like how workers were really working in production lines. “I wish you can all produce documentaries on your own,” said Maggie. 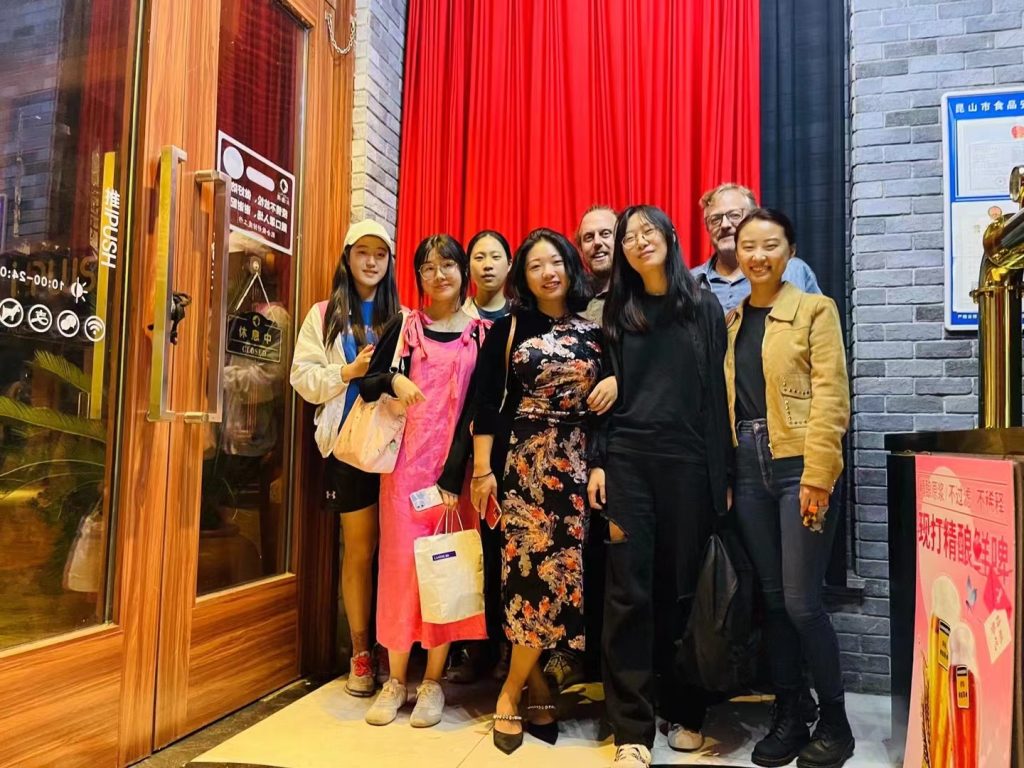 After the Q&A session, the HRC reporter, Zishuo Wu, had a brief interview with her.

Zishuo: I’d like to start with a personal question. I remember you mentioning that you majored in nanoscience – it seems to be very different from being a producer. I am curious about what affected your career choices.

Maggie: So I majored in nanoscience, but I knew that I wasn’t gonna be a scientist. That wasn’t my thing. So I went to Shanghai from Suzhou after graduation. My attitude towards occupations was sort of flexible: I tried all kinds of industries and was doing research and writing and just taking whatever opportunities that was offered to me. And then, like I said, one day, I met a producer from Shanghai media. I’d say that’s when my producer career began.

Zishuo: I wonder if you’ve been interested in something relevant with the films, like photo taking or video recording, has that led to your career as a producer?

Maggie: It wasn’t like that. I like taking pictures as much as everybody else did. So there weren’t any previous experiences in relevant fields so I thought that it was really hands-on. When I had the opportunity, I jumped on it, and I’ve worked and learned at the same time and along the way, accumulate more experiences.

Zishuo: So to some extent, you said that your career as a producer was started by chance?

Maggie: By chance, for sure.

Zishuo: I see. What did you do to facilitate your career as a producer?

Maggie: Again, so once I’m in the industry, it was just more like I needed to make money to pay the rent, right? So it’s more like whatever projects I work on with one director, or one producer, and then they let me to work next time as their assistant. And until one day I had enough experience as an assistant when also the directors or producers receive projects that they cannot do themselves because their schedules were too full, and opportunities come to me. So I went from an assistant to a junior producer and a senior one. Then I can take the whole project.

Maggie: It’s just a fun job, I would like to say. And every job is tough in a way, but you gotta like it.

Zishuo: Thanks. Another question was, as so much information was included in your documentary, depicting different people from different classes, personally, the film may actually be a little bit confusing at times. Especially in the transition of several scenarios depicting very different things. What makes your choice to depict such a wide range of scenarios, like so many kinds of people from many classes?

Maggie: It wasn’t really my choice, but more of the director’s choice. Because it’s more like the director needs to make a decision. She comes to me with a shot list saying I want Asia’s largest water park. I want a sex-related factory. She would have a list of 20 or 30 factories or something and then say: Maggie, can you get me access or permission for those places? And then I got access and then I arranged all the logistics before they flew into China and then I took them from one place to the other. So it was more like the director’s wish to decide what the documentary is.

Zishuo: When you talk about the largest water park in Asia, I was not really aware of that when watching the film. You did not include much descriptive information here. Would that weaken the sense of contrast you were trying to produce?

Zishuo: So, you mean that amplifying contrasts was not your point?

Maggie: We were not trying to make a point. That’s exactly what we were trying not to do. Everybody has a different interpretation, and they should have the lecture as they interrupt it rather than being told or something.

Zishuo: That’s all the questions. Thank you so much!