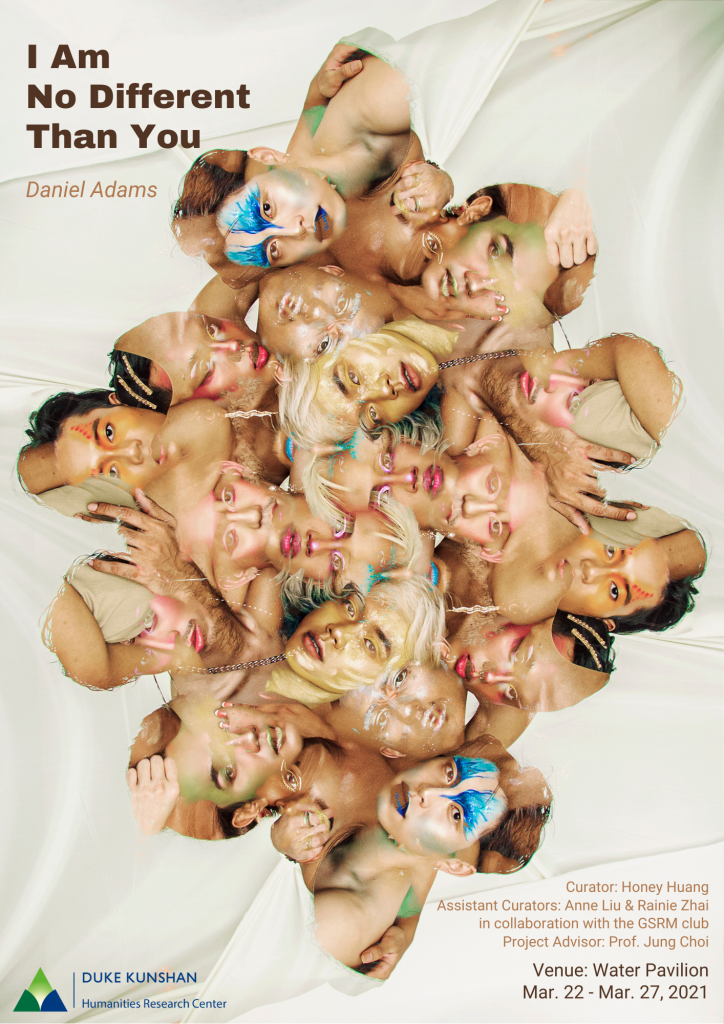 Exhibition Name: I Am No Different Than You

I Am No Different Than You is an exhibition that features one of Daniel Adams’ photography projects titled “BOYS” created in 2020. Adams is a conceptual portrait photographer based in Malaysia. Through his lens, we explore the letter G from the term LGBTQ+. The LGBTQ+ community is an umbrella term for gender, romantic, sexual, and queer minorities. This represents members of the lesbian, gay, bisexual, transgender, and queer or questioning community. It additionally includes many other subcultures like pansexual, asexual, and pangender. In Malaysia where expression of sexual orientation is restricted, we see those brave souls who fight back and show who they are. The gay men represented in this series have fun colorful makeup that highlights their facial features. Each featured personality is designated their own color highlighting their prominent features and matching their auras. The bright rainbow colors bring out the uniqueness of each individual, yet they look no different than you and I. BOYS is a powerful series paying tribute to those who are fighting to truly be themselves.

Many people around the world live in fear because of rampant discrimination for their sexual orientation, gender identity, and how they choose to represent themselves to the world. Despite recent progress in legal rights and a broader awareness on the global stage, the LGBTQ+ community still finds itself underrepresented and often misunderstood. In the earlier days, members of this community have been silenced and restricted from basic human rights. By the year 2020, sixty-nine countries consider consensual sexual acts between adults of the same sex as a crime. Nine countries can issue a death penalty. People have used religion, social conventions, eugenics, and other ways to justify such mistreatment.

Furthermore, despite having a prominent LGBTQ+ community, some places have a complicated relationship between mainstream media and the LGBTQ+ community. They are either represented negatively or underrepresented. The characters on-screen would often be stereotyped in a specific type, for example, a gay person would be energetic, chirpy, and flashy, while a lesbian would have short-cut hair, look edgy and not fit in the crowd. Popular entertainment also has less racial representation. According to GLAAD, an American non-governmental media monitoring organization created to highlight the discrimination in media, BIPOC only makes up thirty-four percent of LGBTQ+ characters on broadcast networks. The strong visual impact of Adams’ work breaks through those barriers. He asked individuals from different racial backgrounds to be a part of his work. His individual and group shots show a strong call for diversity. To further accentuate his visual creativity, he uses different bright colors and fun props to showcase how vibrant each individual is, and it is for the same reason Adams’ work has always been captivating. His creative talents allow each featured personality to exuberate with confidence, and that passes on to his viewers too. Even though BOYS is based in Malaysia, however, Adams’ work translates across borders.

This photo exhibition is the first installment for an upcoming art series where photography is used to showcase the people who are shining a light on the LGBTQ+ community. Sexual orientation and gender identity are fundamental aspects of how an individual defines themselves. As the curator, I hope to use this art series as an opportunity to help the LGBTQ+ community gain more recognition and remove the stigma that societies have attached to them.

I would like to thank Daniel Adams for his powerful and inspiring work and for allowing us to exhibit BOYS at Duke Kunshan University. I would also like to thank the GSRM Club for the collaboration, and Rainie and Anne for their on-site support. I am grateful to the HRC and Professor Miller for sponsoring this exhibition. Thank you to Professor Seth Henderson too, if it was not for taking his class, I would have not thought of putting together an exhibition. Last but not the least, a big thank you to Professor Jung Choi for guiding me throughout this process, without whom this would not be possible.

Artist bio: Daniel Adams is a Malaysian conceptual, portrait photographer who explores and blurs the lines between gender, identity and cultural norms. He also delves into the usage of social and political ideologies throughout his concepts, wanting his work to start discussions amongst its viewers. Along with the exploration of these subjects, Daniel also looks for the unusual and the not-your-everyday aspects to implement into his photography, aiming to recreate the surreal images in his head.

Artist Statement: ‘Malaysia’s federal penal code, which dates back to British colonialism, punishes “carnal knowledge against the order of nature” with up to twenty years in prison. The country’s thirteen states and federal territories each have their own Sharia criminal enactment, applicable to Muslims. Almost all such state laws prohibit same-sex relations. They also prohibit “posing” as someone of a different sex, making Malaysia one of the few countries in the world that locks people up simply for being transgender.’ (The Deceased Can’t Speak for Herself: Violence Against LGBT People in Malaysia – Neela Goshal, Human Rights Watch, 2019)

It’s never easy growing up in a home yet alone a home country in which your sexual orientation is constantly looked down upon. The LGBT community still faces struggles day in and day out. I wanted to create a series of images of gay men (all of whom I know/have met before who inspire me). Thank you for constantly being yourselves and pushing boundaries.