European Icons Homepage
Franz becomes “Der Kaiser”
Throughout his career, in Germany and the footballing world, Beckenbauer was known as “Der Kaiser.” Interestingly though, the nickname had little to do with football. He was first called the Kaiser by a magazine that said he looked like Kaiser Ludwig II, the eccentric and former Bavarian King. Indeed, many people agreed that when he was young he had a “rapt, alter-boy look.”[1] However the nickname was cemented when, following a friendly match in Vienna, Beckenbauer was pictured next to a sculpture of Franz-Josef the former emperor of Austria.[2] The picture has since disappeared however the name has stuck. A Young Beckenbauer and a young King Ludwig II [3]

The 1966 World CupWhen Germany reached the World Cup final in 1966 the question was, “How was Beckenbauer to be used?”[4] The dilemma the German team faced with the 22-year-old Beckenbauer speaks to the special role that he had in the team. For anyone other than Beckenbauer, sweeper was one of the most unambiguous positions on the field. The position demanded that the player stay back, and mark the opponent’s star; he was the last line of defense. However, Dettmar Cramer, the West German assistant coach summed up the dilemma that Beckenbauer’s coaches faced early in his career:

How much should Beckenbauer be held back?

Cramer argued that having Beckenbauer simply mark Bobby Charlton—England’s best player—would be counterproductive because it would rob Germany of its major creative force. In the end Beckenbauer focused on his defensive role, did not attack in his trademark manner, and England defeated Germany to win its first and only World Cup.[5] This defeat was integral in defining Beckenbauer’s true strength and import to the West German team. In the future he would not again be told to stay back and simply defend. He finished the World Cup tied for third top goalscorer with four goals from his defensive position.

Despite a late equalizer by Germany, the English won the 1966 World Cup.

In 1968 the two teams met for a friendly in Hanover, a rematch of the ‘66 final. This time Beckenbauer was not stuck in a purely defensive role and had more freedom to move up and down the field; he scored the only goal in the West German win. This win was significant because it was Germany’s first ever win against the English. Years later Beckenbauer described the match,

“That was when we realized we could really beat the English and lost some of the respect we had had. And we just took it from there.”[6]

In the quarterfinals of the 1970 World Cup, West Germany knocked out England 3-2 with Beckenbauer scoring the first goal of the German comeback.

His amazing runs from the back defined Der Kaiser’s career. Here, a classic move as Beckenbauer shows himself to be one of the greatest attacking defenders ever.

Beckenbauer had a massive influence on the West German side in the 1974 World Cup in Germany both as a player and an unofficial “assistant manager.” When the team threatened to walk away from their own World Cup because they were being paid less than the Dutch and Italians, he convinced them to accept the lesser pay.[7] In the same tournament he came to the rescue of coach Schön who broke down after the loss to East Germany; the coach was unable to speak and locked himself in his room.[8] Beckenbauer accompanied Schön to the subsequent press conference and did all of the speaking. He also organized the team’s travel to the next match and shared command of the team with Schön.[9]

In the 1974 World Cup final Germany played the Netherlands, “the Brilliant Orange,” led by skipper Johann Cruijff. The game was billed as the showdown between the two nations’ icons, Beckenbauer vs Cruijff. The match began with a bang, after one minute of play, with no German having touched the ball, Cruijff made a darting run into the box and was brought down by Uli Hoeness. The Dutch had a penalty which Neeskens summarily converted. The opening goal defined the match; the Germans now had no choice but to attack. After twenty minutes of play dominated by the Dutch, the Germans settled and began to control the match. Starting at the midway point in the first half, Cruijff was effectively taken out of the game by the German defense while Beckenbauer commanded the German team and pushed them into attack whenever they had the ball. By half time Germany had equalized and then taken the lead 2-1 through goals from Paul Breitner and Gerd Müller. The second half was controlled by the German team playing in front of their home crowd and in the end West Germany won the match with the same 2-1 scoreline. Although Cruijff was the better player in the first few minutes, Beckenbauer played a superior match, won the battle with Cruijff and finally tasted World Cup glory in his third and final tournament as a player.

After retiring from football in 1983, Beckenbauer took over as coach of the German national team in 1984. Following only six years at the helm he brought World Cup glory back to the West German national team. He remains the only player in history to captain and coach a team to a World Cup title. Beckenbauer’s success as a coach translated into success as President of Bayern Munich FC, later Vice President of the DFB and then Chairman of organizing committee for 2006 World Cup. [10] In this capacity he was instrumental in first getting the cup to be played in Germany again, and then seeing it run through smoothly. His work was instrumental to the success of the team. They were underdogs coming in; not many believed them to be a strong German team, yet buoyed by terrific home support, they were able to finish third. Tomlinson writes,

“had Germany won the 2006 World Cup the only designation appropriate for Beckenbauer would be football God.”[11] 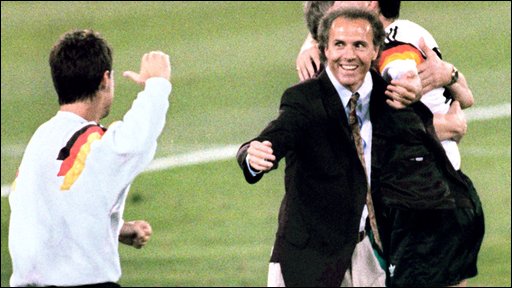 With such an intimate connection to the major successes of the German team, the structure of the German game and the organization surrounding it over the past forty-five years, Beckenbauer’s influence in German football is impossible to overstate.