As a San Jose native, the earthquakes team and I have a personal relationship. Frank Yallop, San Jose’s former coach and 2012 MLS coach of the year, lived accross the street from me and we would converse often. One day, I went outside, saw a property for sale sign, and discovered the earthquakes were making management changes. The blog that helped me keep up to date and see opinions on the Earthquakes was  the Sbnation post on the San Jose Earthquakes. This site provides great video and image galleries as well as fanposts on various topics associated with the Earthquakes.

One representation of the changes associated with the revamping Earthquakes is the signing of swiss international striker Innocent Emeghara for the club. As the Earthquakes finished dead last in the Western conference of the MLS, they were looking for someone to not just be the future of the quakes, but of the entire MLS. This article states that even though Innocent took a risk not signing with a more major market soccer team such as a La Liga squad, that he noticed the Earthquakes were looking to expand and grow in a developing country in the soccer spectrum.  The article makes an interesting parallel to the diversity of the bay area as a whole in terms of the earthquakes representing this notion. By signing players from international squads other than the U.S, the earthquakes have participated in an MLS wide trend to bring in stars from international teams.

Another great section of the blog is the quotes section, where fans post quotes about recent headline news associated with the San Jose earthquakes. One quote I believe sums up the identity of the San Jose earthquakes identity, “Wondolowski’s goal was the stereotypical Wondolowski goal. There was no great run, pass or finish involved in the goal at all…It wasn’t fancy or even impressive, but it rarely is with Wondolowski.” The earthquakes, who pride themselves on scoring, no matter how pretty it looks, follow their leader’s mentality. Wondolowski, arguably San Jose’s best player, has gotten increased attention in the media, due to his missed goal in last year’s world cup against Belgium. However, this blog shows that the fans in San Jose still support their beloved striker. As you look at the links section in the blog, it discusses “Wondo’s” stride on making history in the context of MLS scoring.

Another interesting portion of the blog is the recent fanshots that certain posts make in order to show opinionated support for the quakes. One post is headlined “Martin’s lucky chip over quakes named 2014 MLS Goal of the year.” By not properly acknowledging a nice goal from the other team with a sarcastic headline, this blog shows an interesting one-sided perspective on this club. And being a San Jose fan, I would say this goal is definitely worthy of the award and not deserving of the hostility towards the other teams.

As another representation of the multitude of changes revolving around the Earthquakes, there is a section in this blog that talks about the new stadium the Earthquakes are building to enhance their fan base and upgrade their overall brand. In fact, there is an entire section titled “our culture” which discusses the multiple ways the Earthquakes are looking to rebrand and upgrade their team all around. Avaya stadium, with its european design, is meant to have the steepest-raked seating in the MLS and will have a canopy over it to attract fans from all over the bay area. Going home for vacations, I have noticed all the buzz around the privately built construction of Avaya stadium. The Earthquake fans are excited for this new 55-year contract plan, which will also increase the box seating experience for high net worth individuals in the Bay area. 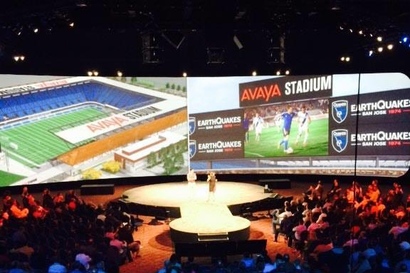 The last section that drew out to me in this blog was keeping up to date with the Earthquakes players and their collective bargaining agreement. The ongoing negotiations between the MLS and MLS players union have sparked controversy throughout the country in regards to soccer. When Earthquakes were faced with the issue, the entire tone accross the locker room was more serious than lighthearted. This has been an issue in multiple sports such as the NBA or NHL, where lockouts have insued. This article in the blog was the most appealing to me because of its argument between the tension between the growth of the MLS and the attitude of the players. The fans and the blog believe a deal can be done so that both management, the league, and the players will be satisfied.

Overall, this blog greatly summarizes the recent trends in the MLS and the new cultural mindset for the San Jose Earthquakes. Bringing in international players and increasing their brand exposure by building a new stadium, the Quakes are poised for significant growth in the United States. I am excited for what is to come and to see the San Jose Earthquakes establish an identity for future years.