I’ve been a good fan: sticking with the French through the decade since 1998, through ups and downs and waves of absurdity. I managed to get through the experience and the aftermath of the 2006 World Cup, though it did take writing an entire book about the history of French soccer to do so. I hobbled through the Shakespearean tragedy of 2008 European Cup, watching my hero Thuram outrun and outfoxed in one game, then exiled to the bench for his final match for France. I even smiled my way through the farce of 2010, with locker-room rants turned into issues of national security — partly because being in South Africa for the World Cup was quite enough joy for a lifetime. This fall, I briefly felt a foolish serenity, thinking that things must be getting better, that the team was being rebuilt, and have even started taking absurd satisfaction in victories over Luxembourg and contemplating going to Ukraine in 2012.

But what I saw this past Friday — the unveiling of the new French jersey — has catapulted me into the depths of despair.

I actually thought, at first, it must be some kind of post-modern joke: a performance art piece done, with the collusion of the French football federation, by a super-hip Parisian artist who has decided to transform the theater of football into a theater of fashion parody. I imagined the artist, interviewed on some incredibly tedious French talk show, describing how he was attempting to deconstruct the ways in which “Frenchness” has traditionally been figured by transforming the space of masculine sports culture into a zone of humorous inversion.

What else, after all, could truly explain this jersey?

But no, it’s not a joke. It’s actually a carefully crafted Nike product, unveiled specially for the France-Croatia friendly played last week at the Stade de France. (Just as this hilarious 1974 football fashion display was also, remarkably, dead serious.) I was all geared up for the game: figuring it would bring back memories of the 1998 Semi-Final when, in the same stadium, Thuram scored two goals — the only two ever in his career for France — to secure the country a place in the Final. Even though the game wasn’t particularly great, I still would likely have enjoyed it — if it weren’t for those jerseys. But instead I just sat there, dumbfounded.

The poor players were forced to saunter onto the field actually wearing these things, and play a game without dissolving into laughter or tears. Are they really paid enough to have to do that?

Even worse, Rami ended up hurting himself — writhing on the ground, with a serious shoulder injury. In that jersey. 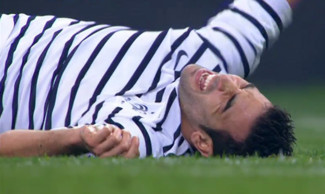 I miss the nice dark blue. I even miss those simple white jerseys Zidane headbutted Materazzi in. I miss my innocent youth of chanting “Allez les Bleus” and it having some logic. During the last year, it’s seemed increasingly clear the world is ending: natural disasters, political disasters, bizarre climate change, silly bandz, one thing after another. But there was still this little pure space left: the spectacle of my team, playing and even winning sometimes, of skilled players from a rich range of backgrounds coming together for a common goal. Now that, too, is gone. Never again, at least as long as they wear those jerseys, will I be able to watch a game without sobbing.

There are, I know, plenty of other options. I can start rooting for Algeria — they have nice green uniforms with flourescent green socks, and are pretty much all French these days anyway. I can root for Brazil in 2014: who (other than Argentines, that is) doesn’t feel cool in the bright yellow of the Esperanto of football jerseys? I’ve always liked Brazil, the national team of Haiti. And, without even leaving home, I can root for Guadeloupe, the underdog in that underdog of global football championships, the CONCACAF Gold Cup. They’re French too, after all, and nicely decked out in red and green. Or the U.S, with it’s nice jerseys and a new slogan and symbol purified of reactionary resonances.

But perhaps the only sensible thing is to take a break from international football altogether, and watch my French players at in Chelsea Blue or Arsenal Yellow. I’m not sure about Russia 2016, and a little freaked about about the heat, and the fake cloud machines, promised for Qatar 2022. I know Zidane thinks it will be great, but the whole event threatens to be a bit too FIFA-Disney for my tastes.

Hopefully, by the time of the 2026 World Cup in Fiji or Sri Lanka, France will have gotten rid of their ridiculous little sailor boy jerseys, and I’ll be ready to come home again.