This photo campaign, “Humans of Duke: Intersectionality and Neuro-Divergence,” explores and celebrates diversity in all its forms. Click on an image to view the gallery! Each picture has an image description. Some of the captions include anonymous quotations derived from interviews with the subjects of the photo series. However, the captions do not necessarily represent the words of the person in that photo. The ideas expressed are a random assortment. 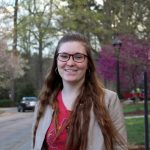 This picture is a headshot of a young woman with long, red hair wearing a pink shirt with a tan jacket and glasses. She is standing in front of trees and is smiling into the camera. “It’s sometimes hard to help someone who may struggle with mental health because their symptoms aren’t always as clear as they would be for the flu. Sometimes someone close to you could be struggling and you don’t even know it and you can’t just treat it with a cup of soup and some medicine… it’s difficult to know when someone is struggling with mental health.” 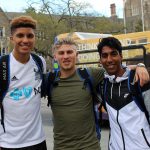 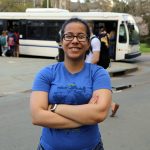 This picture is of a girl standing at the bus stop smiling with her arms crossed. She is wearing a blue, short-sleeved top. She wears a watch, has glasses, and has her hair tied back in a ponytail. “Mental differences shouldn’t define who we are as humans. They should be acknowledged and recognized, but they should never hold someone back.” 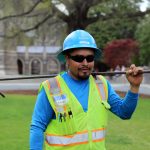 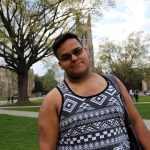 This picture shows a man wearing a black and white tank top with a pattern on it. He is standing in front of the Duke Chapel and is wearing sunglasses. He has short, dark brown hair and has a slight smile that does not show his teeth. “I’ve never dealt with depression, but I have a friend who has and I think that the most surprising thing about it was how wrong I was about the signs of depression. I never knew that she was dealing with depression until she told me. I learned that the symptoms of depression vary from person to person; not everybody’s depression is the same, so I think that each person should be handled differently because of those differences.” 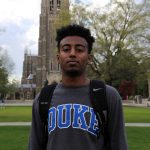 This picture depicts a young man standing in front of the Duke Chapel with a straight face. He’s wearing a grey DUKE t-shirt with blue lettering and is carrying a backpack. He has black hair that is short on the sides and long on the top. 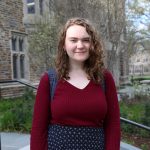 This picture shows a young woman wearing a red v-neck sweater and a patterned skirt. She is standing in front of a building with a slight smile that shows no teeth. Her hair is brown and curly. 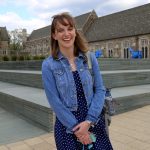 This picture shows a young woman with a blue patterned dress layered with a denim jacket. She has sunglasses on the top of her head and is smiling into the camera. She has short brown hair with bangs and holds her phone in her hand. “When talking about activism, you can’t forget about neurodiversity. We have to be inclusive of all types of people.” 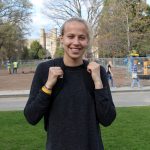 This picture shows a young woman with her blonde hair pulled back in a bun, smiling into the camera. She has a backpack on and is holding the straps of the backpack while it’s on her back. She is wearing a dark gray long-sleeved shirt. 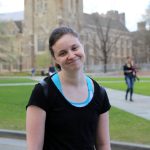 This picture shows a young woman smirking into the camera while standing in front of a building. She has a blue tank top on the is underneath a short-sleeved black shirt. Her brown hair is pulled back into a ponytail. 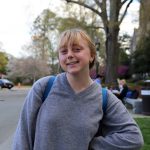 This picture shows a young woman smiling with her hand on her hip in front of some trees. She has blonde hair with bangs that is pulled back into a ponytail. She is wearing a grey, long-sleeved sweater and has a backpack on with thin blue straps. 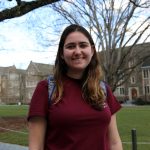 This picture shows a smiling young woman with medium length hair that goes from a dark brown at the top to a lighter brown at the tips. She is wearing a maroon short-sleeved top and has a backpack. “After coming to college, I realized that struggling with mental health can happen to anyone.” 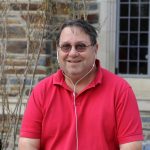 This picture is a head-shot of a middle-aged man wearing a red polo tee-shirt, sunglasses, and earbuds. Behind him we see the outer wall and window of a building, made of gray stones. He smiles into the camera. Q: If you had to give advice to someone who is struggling with their mental health, what would you tell them? “I’d tell them that they’re not alone and that it’s okay to get help. Sometimes, treatment or therapy, in any form, can be helpful. Just know that there are people who care.” 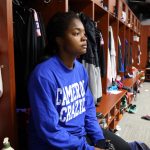 This picture shows a young woman sitting down in a locker room with a straight face. She is wearing a blue, long-sleeved shirt that says “CAMERON CRAZIE” on the front. Her dark brown hair is pulled back into a ponytail. “There’s a lot of stigma surrounding mental health issues and a lot of people can be suffering from mental illnesses without anyone ever noticing. I think we all know someone who deals with mental illnesses.”