How the Little Things Added Up

When people look at my brother Cole, they don’t see the amazing, loving, caring, energetic, and sociable individual he is. What most people see is that he has Down syndrome, a genetic disability that is the result of the presence of a twenty-third chromosome. They discard his individuality as being consumed by a disability; however, that is not at all the case. Cole, who is now 21 years old, was the most popular kid in my high school, winning both Prom King and Homecoming King his senior year. Cole graduated with a high school degree, a feat some thought he would never accomplish. He now has not one, not two, but three part-time jobs, earning enough money to almost take him off social security from the government. Cole emits a light into the world that brightens the day of whomever it touches, and he affords no one the power to dim this light. 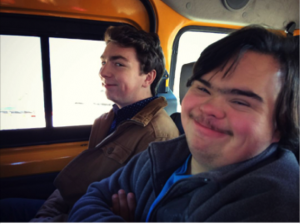 However, it is entirely possible that Cole could have never become this amazing person. His classmates could have isolated him because of his disability, leaving him little to no social interaction outside of our family. His teachers could have given up on him to not “hurt their test scores.” Our community could have turned against Cole, as many communities turn against the disabled individuals who need them the most. Luckily, that was not our situation.

As many human beings are, Cole is a product of his environment. My parents started early, taking him to speech therapy, working with him at home, and constantly giving him love and support. When we moved to Tennessee (when Cole would be entering the second grade), the school district wanted to put Cole in “special” classes. These classes allowed students with disabilities to learn at their own pace, which sounds good in theory. But, in application, these classes often lead to the isolation of disabled students. My parents fought to have Cole placed in “regular” classes, where he would have a personal aid to help him keep pace with the rest of the students. This was, in my opinion, one of the biggest contributing factors to making Cole the shining individual he is today. Because he was included in the student body from the beginning, no one saw him as “different.” The formative years of elementary school are when many of us learn the basic social interactions of our culture, and this social aspect of school is usually forgotten when considering the education of a disabled student. Cole was thrown into a social atmosphere with the rest of the second-graders, which led to him thriving in it. Cole made friends, and more importantly, Cole learned how to make friends.

Now, I am not going to argue that because my parents put Cole in “regular” classes, Cole became the amazing version of himself that he is. Everyone along his path was crucial in creating the current Cole. From his wonderful aid, Mrs. Kelly, to his many awesome friends, Cole was constantly surrounded by people who supported him in his difference, not stigmatized him because of it. If I went through every individual who made a positive impact on Cole’s life, I would need a book… or a series of many large books. Instead, I will just highlight a few that have stood out to me as being especially impactful.

The first individual, without a doubt, is Cole’s aid, Mrs. Kelly. Kelly was a kind woman who took Cole under her wing and transformed a job into a real bond. She made sure that Cole was always doing his work, always behaving himself, and always being included. A second-grader without Down syndrome can be hard to keep focused, so I can only imagine how difficult it was to keep Cole on task, yet she did it. However, one of the best things she did for Cole was keep him accountable. A lot of people will disregard a disabled child’s behavior to be the result of the his or her disability, allowing the child to continuously misbehave and lead to further social isolation. Kelly held Cole to a higher standard of behavior than any student in that school! He was always one of the better-behaved students in his class, which persisted throughout his high school career (Kelly was only his aid through the eighth grade). As he matured, Cole had a sense of responsibility that some of his peers still lacked, all thanks to Kelly. She was his “School-Mom,” and was such an amazing influence in Cole’s life that my parents asked her to be responsible for Cole if something were to happen to them. Without Kelly, Cole may have turned out to be another child with Down syndrome that became isolated as a result of bad behavior. 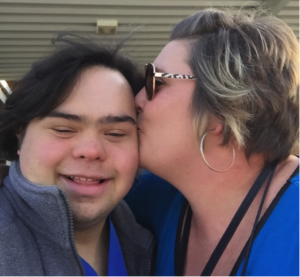 Cole also had a set of friends, Mark, Michael, and Brandon, that had a significant impact on him. These three were all athletes, and they were also a part of the “popular clique” in Cole’s grade. They took Cole into their group when they were still in middle school, which led to Cole making even more friends. These three included him in everything: they ate with him at lunch, they walked with him in the hallways, and they invited him to do things outside of school, like go to parties or football games. After everyone saw how these three interacted with Cole, it became the norm. Everyone would high-five Cole as he walked around the halls. People would move in the student section of a football game so that Cole (only standing 5’4’’) could see the game. It has gotten to the point where we cannot take Cole anywhere in town where he doesn’t see to someone he knows from school. And all this was possible because three sixth-graders took a fellow classmate under their wing. 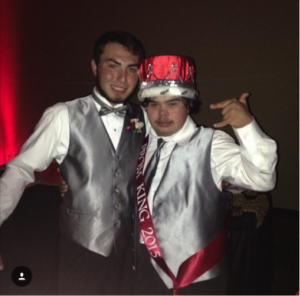 Cole’s favorite hobby is flirting with girls, one he did not refrain from participating in at school. But Cole doesn’t flirt in the awkward teenage way that everyone else does. He flirts by flat out stating that a girl is pretty and proceeding to ask her to be his girlfriend. And, once again, it only took a few girls being kind to make an impact. One girl named Hannah, was the sweetest girl to Cole, always saying yes and making him feel like a million bucks whenever they were together. Of course, everyone knew they were not actually dating, but nobody pointed it out because why ruin innocent fun? Soon, every girl in the school wanted to be Cole’s “girlfriend” because he was always able to bring a smile to their faces. Even though Hannah went away to college, she still comes back to see Cole and take him out on “dates.” She even posts pictures with him on Instagram, which makes him beam with happiness every time. It doesn’t take much to make someone smile. 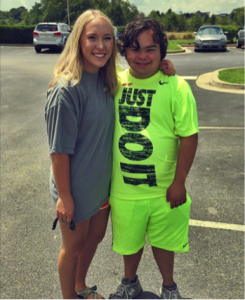 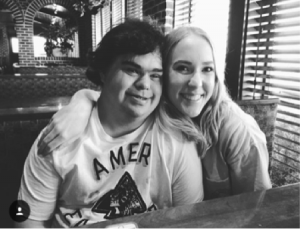 We are a baseball family. Cole and I were born and raised on baseball, and I have been playing since I was four years old. This meant that Cole was always at my games, from Little League to middle school to high school. He became a staple to my membership on a team. He was always our biggest fan, cheering as loud as he could for us, win or lose (which made him the one of the most hated fans of our opponents). Naturally, Cole became an unofficial part of the team, talking to players before and after games, helping with field work, and even playing catch with us. When we were at the baseball field, we never had to worry about where Cole was or what he was doing because everyone on the team and their families watched out for him. No single parent or fan kept an eye on him throughout the game; rather, everyone kept a glancing eye on him, which resulted in a safe and caring environment where he could enjoy watching the game wherever and with whomever he wanted to.

My last example is my good friend, Corey. Corey has been my best friend (other than Cole) since the sixth-grade. He and I played baseball together for six years, and because we have been friends for so long, Corey has become part of my family. This means that he is also very close to Cole. When Corey and I would go out, I would try and bring Cole with us as much as I could, and while I could see how this could get annoying, Corey never said a word about it. Corey always treated Cole as part of the “squad.” When I made the decision to come to Duke, which is a six-hour drive away from my home, I was concerned for Cole. Cole doesn’t have his driver’s license, so I was worried that he would be confined to the house, not wanting to always have his mom drive him places. However, in my absence, Corey has been taking Cole with him, usually around once a week, to go out and do something with him, whether that be getting dinner, going fishing, seeing a movie, or anything else. This has been amazing for Cole, and I am forever grateful to Corey for doing it. When I asked Corey how much time these “outings” take up, he said they usually last around two or three hours. Corey gives two out of the one hundred sixty-eight hours in his week to spend time with Cole, and, without fail, those two or three hours bring the biggest smile to Cole’s face. 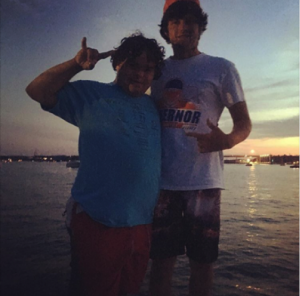 Cole is my hero. His light shines brighter than any I have ever seen, and I aspire to shine like him. If the world had more lights like Cole, maybe it would be a brighter place. But those lights are made by hands; your hands, my hands, our hands. We create these lights by being kind, loving and supportive to those with disabilities. A high-five, a “Hey, how are you?”, a five-minute conversation, a lunch…. None of these individual things are going to monumentally impact a disabled person’s life. However, if a community were to do these things in harmony, its impact could change the life of someone who needs it. So, from someone who has witnessed the difference you can make, I ask you: take the time. Make the effort. Make the change. All it takes are a few little things.