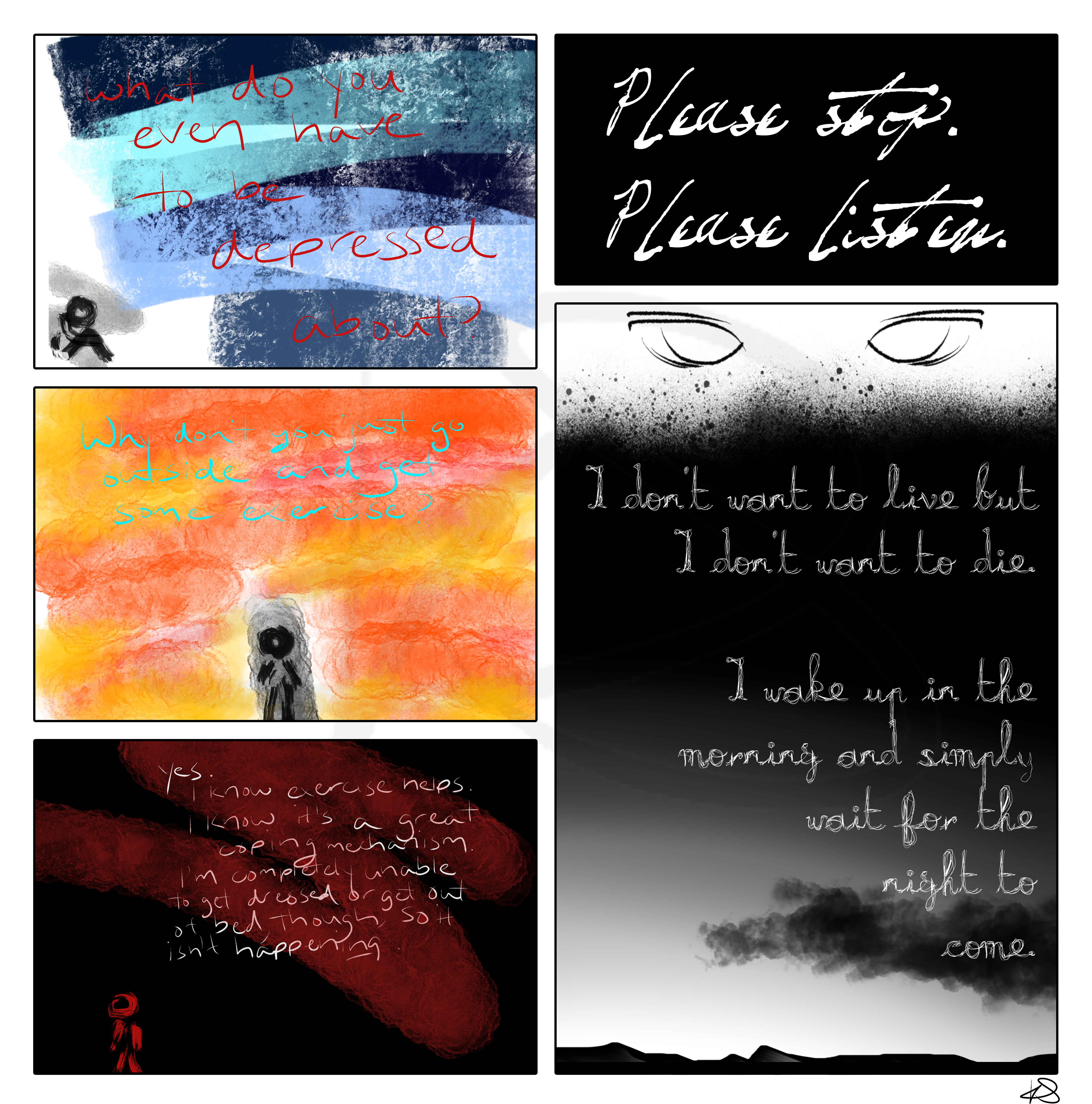 I. Image description: Beginning on the left side of the comic and working downwards: In the first panel, an individual curls up in the corner, as the words, “What do you even have to be depressed about?” are scrawled across a blue-toned background. In the second panel, a shadowed individual stands amidst a background of orange/yellow/red, with the question, “Why don’t you just go outside and get some air?” scrawled along the top of the image. In the third panel, on a black background with red highlights, a red individual stands to the left, accompanied by the words, “Yes. I know exercise helps. I know it’s a great coping mechanism. I’m completely unable to get dressed or get out of bed right now, though, so it isn’t happening.” On the right side of the comic, “Please stop. Please listen.” appears on a black background. Below this, the final panel says, “I don’t want to live but I don’t want to die. I wake up in the morning and simply wait for the night to come.” The background for this panel is comprised of empty eyes at the top of the picture, which merges with a black and white sunset.

II. Image description: In the first panel, two stick figures stand together (they will be referred to as Cowlick and Baozi, as one’s head features an upturned cowlick and the other’s head is shaped like a baozi). Cowlick appears ecstatic, arms raised, exclaiming, “Just don’t think about it!” while Baozi is expressionless (he has no mouth). The second and third panels feature close-ups of the Baozi’s and Cowlick’s faces, respectively. Baozi now has a neutral expression, his mouth a straight line, while Cowlick’s remains ecstatic (the same expression as the first panel). The final panel is a full-body shot of Baozi, wearing an ecstatic expression with his arms now wave-y lines, a nondescript bottle flying off screen, with the response, “Wow, I’m cured! That was easy, now I don’t need these pills!”

III. Image description: In the first panel, Cowlick and Baozi stand together. Cowlick appears ecstatic, arms raised, exclaiming, “You have to want to get better!” while Baozi is expressionless (no mouth). The second and third panels feature close-ups of Baozi’s and Cowlick’s faces, respectively. Baozi now has a neutral expression, his mouth a straight line, while Cowlick’s remains ecstatic (the same expression as the first panel). The fourth and fifth panels feature similar close-ups of their faces. In Baozi’s panel, his face is expressionless again, however there are strained lines around his eyes, with the caption, “Ah. I see. Thanks.” Panel five features the same closeup of Cowlick’s face as panel three, with the caption, “No problem!”

IV. Image description: In the first panel, Cowlick and Baozi again stand together. Cowlick gestures to Baozi, asking, “So, you’re depressed?” Baozi is expressionless, responding, “Uh, yeah, I have depression.” The second panel focuses on Cowlick’s and Baozi’s faces. Cowlick maintains the mindless expression from the first panel (mouth forming an ‘o’), while Baozi’s expression is neutral, with a question mark hovering near his face. In the third panel, Cowlick, with the same expression as before, and arms raised, exclaims, “But you’re not crying all the time so you can’t have depression!!” The fourth panel focuses on Baozi’s face. His face is expressionless again (no mouth), however there are strained lines around his eyes. The fifth panel features part of Baozi’s face as he edges out of the panel, with more stress lines around his eyes. The final panel shows only a sliver of Baozi’s face, with motion marks indicating his departure, as Cowlick (off-panel) questions, “Where are you going??”