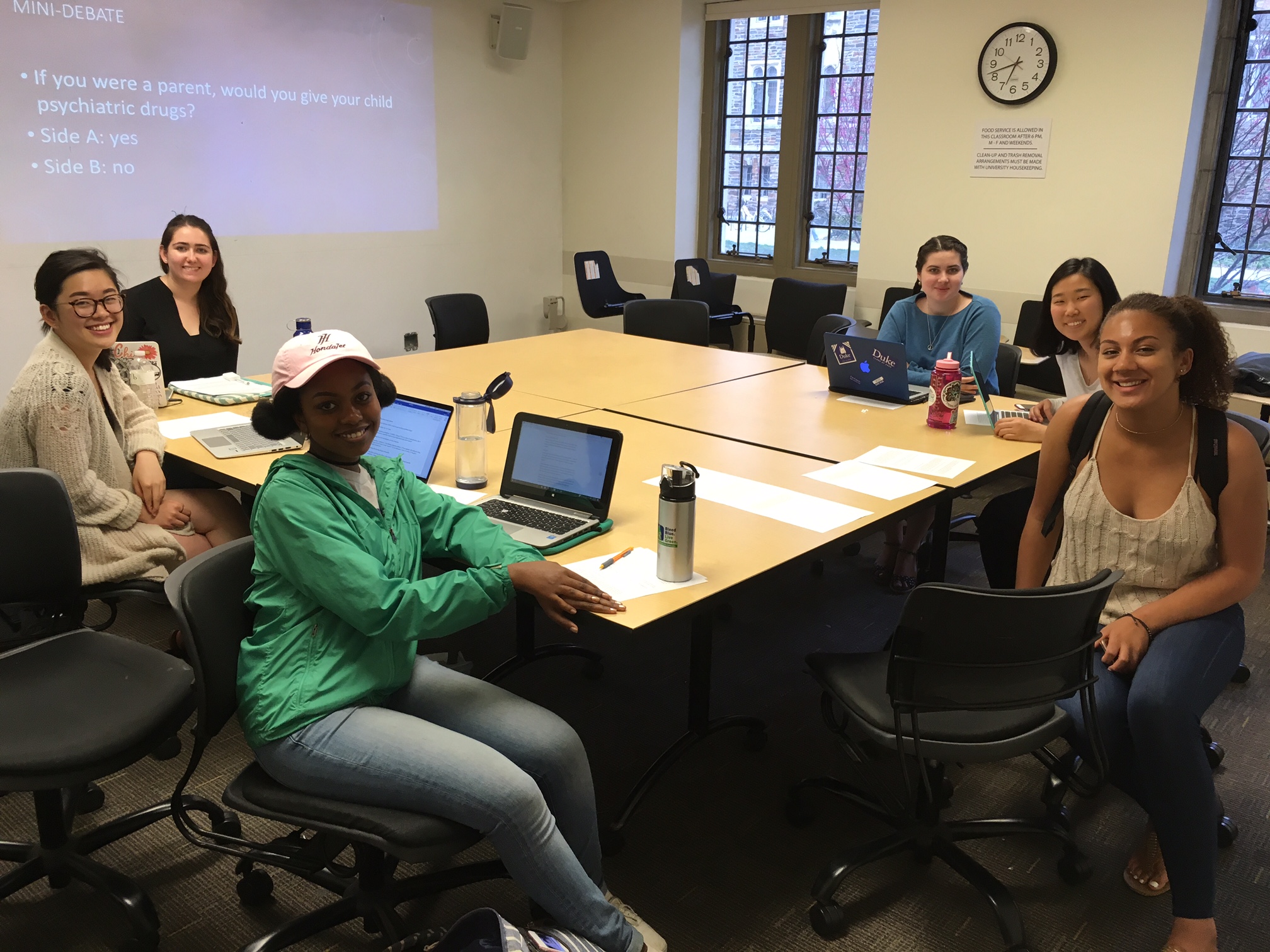 Image description: Six Duke students, a diverse group of young women, sit around a large table with laptop computers, paper, pens, notebooks, and water bottles. They are in a bright classroom with white walls, and are seated in swivel chairs. The students smile into the camera. On the wall behind them is projected the question, “If you were a parent, would you give your child psychiatric drugs?” A clock on the wall to the right shows that it is 6:42 PM. Two windows look out onto Duke’s West campus and a sunny spring day.

This event — a discussion session organized by Olivia Lee — gave participants an opportunity to learn about the history and function of psychiatric drugs, and to engage in honest dialogue about the complexities of determining their effectiveness.

“But here’s my concern: For the vast majority of my patients, when a medication “works,” there are numerous other potential explanations, and a simple discussion may reveal multiple other hypotheses for the clinical response. And when you consider the fact that no two people “benefit” in quite the same way from the same drug, it becomes even harder to say what’s really going on. There’s nothing scientific about this process whatsoever… as far as I can tell, I’m doing things right: I prescribe appropriately, I use proper doses, and I wait long enough to see a response. My training is up-to-date; I’ve even been invited to lecture at national conferences about psychiatric meds. I can’t be that bad at psychiatry, can I?”

“The other really good thing that happened was that the agitation and restlessness I’d felt for the last six years was all of a sudden gone. I felt much mellower,more relaxed,and at peace. It’s been wonderful.

I’m finally free,and my body and mind is loving it. I wish I’d believed in myself enough to do this years ago.”

—a patient on weaning herself off psychiatric drugs

“In the first 103 double-blind studies in depression, summarised in 1993, approximately two-thirds responded to tricyclic antidepressants or monoamine esterase inhibitors compared with a third responding to placebo. The large National Institute of Mental Health schizophrenia trial, published in 1964, reported that 69% responded to antipsychotics and 24% to placebo (NNT 2, effect size 1.31). In the first large obsessive-compulsive disorder trial, published in 1991, half the sample responded to clomipramine and only 5% to placebo.”

“the psychiatric drugs were not generally less efficacious than other drugs”

“While on coerced neuroleptic psychiatric medication, also known as antipsychotics, the more I tried to focus and think, the more difficult I found the task. I developed a number of physical side effects to the medications that some might consider trivial, but that I found upsetting, such as muscle contortions in my neck and blurry vision. All in all, I felt humiliated, disrespected and defiant.”

“I’m not anti-medication, but I am anti-bullshit. I know that medications truly help some people, and some people do well on them. Those people should feel free to continue using them. However, I think all people should be given honest information about psychiatric meds before being put on them. We should be told how hard they can be to get off, and that there is not a ton of research showing long term effectiveness for medications. We should be given the truth that the chemical imbalance theory has not proven to be true. We should be given help and support for getting back off the medications as soon as possible. This would be the best way to help the 40% of people that do not respond to any given medication and might actually be harmed by it.”

Psychiatic Drugs: A Presentation of the Debate

Assign Sides, and have mini-debate