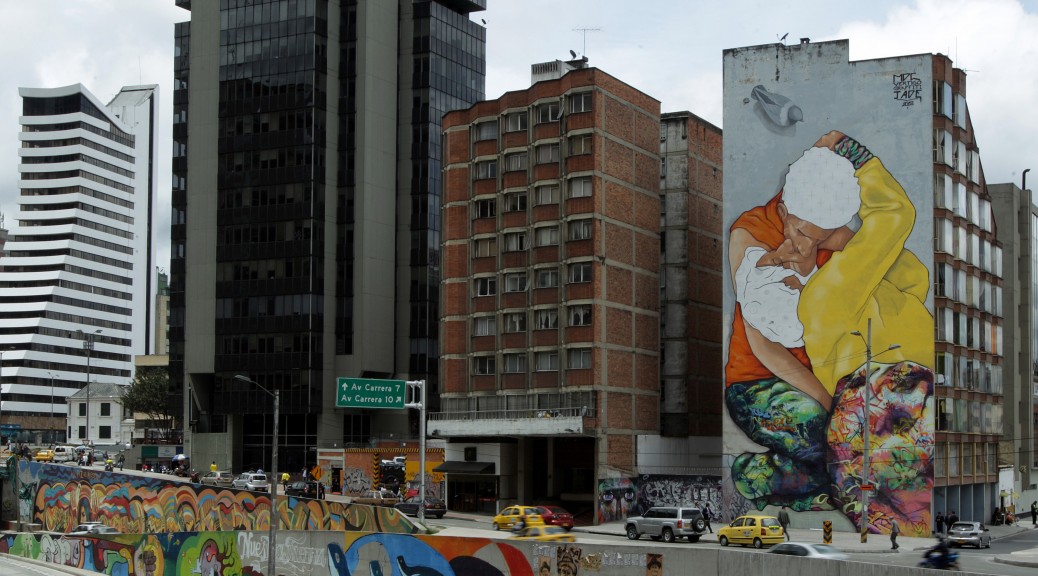 Bogotá (in existence since 316 as the capital of the Muisca people, it was re-founded in 1538 by the Spaniards under the name of the last king of the Muisca).

The battle for public space and freedom of expression in Bogotá (and Colombia in general), has taken a big toll. However, recently the main cities in the country and in particular Bogotá is experiencing a boom of claimed public space, public art, and graffiti in particular, which gives hope that the fifty years of the modern internal conflict is reseeding. Nowadays, up to four thousand active graffiti artists use the walls of the city everyday to express the frustrations, alliances, memories, and actions of a generation that looks at the future with a renovated attitude. Bogotá has also become a central focus on debates of public transit, public space, social policy, city culture, sustainability, and social inclusion. This 9.5 million city takes pride of being among the highest in the world, at 8,300 ft. over sea level. Bogotá is listed in the top five global cities for the art market, and selected in the top three for as emerging financial center in 2014, challenging the fact that it is located in a high plateau of the Andean range more than five hundred miles from the ocean and any international border.

TED Talk/Enrique Peñalosa: How Buses Represent Democracy
Enrique Peñalosa was the mayor of Bogotá, Colombia, between 1998 and 2000. He advocates sustainability and mobility in the cities of the future.