A Firewall is a buffer used to block unauthorized access.  We adapt the term ‘Firewall,’ in the context of gerrymandering, to describe a districting plan that artificially protects the power of a political party.  What follows is an exposition on how we discovered a Firewall in the enacted districting plan for the Wisconsin General Assembly  that protects the Republican Party from losing the majority of the seats.

For districting plans of the Wisconsin General Assembly, we generate thousands of compliant redistricting plans.  To evaluate the enacted districting plan (the Act 43 plan), we ask if how many officials are elected by each party for each plan for a given a set of votes: Each plan in the ensemble will generate a certain number of Democrats and a complementary number of Republicans (ignoring independent candidates), and we can construct a histogram that measures the number of representatives from each party, out of the 99 available seats.

For example, when looking at the Wisconsin General Assembly districts, we construct histograms of the projected number of Republican elected officials that would have won based on 2012, 2014, and 2016 voting data.

In order to compare whether or not the enacted Act 43 Wisconsin redistricting plan is typical, we display the number of elected Republicans with the given voting data, and contextualize the Act 43 plan results within the histograms.

If we view each set of voting data as an individual test for typicality, we have passed two tests and failed one which, naively, may suggest that the Act 43 map may be reasonable.  But there is something strange about where the enacted map is typical and where it is not: When the number of expected Republican seats begins to approach half — meaning a loss of a Republican majority — we see an atypically large number of Republican representatives.

Three elections is hardly enough to draw any conclusions, so next, we redraw histograms for a variety of election data, and plot the histograms in the context of the statewide Republican vote fraction.  We also examine the predicted outcome of the Act 43 map under each set voting data and visualize the result of the enacted plan with a red circle.  We use voting data from the Wisconsin State (General) Assembly in the years 2012, 2014, and 2016 and denote these elections as WSA12, WSA14, and WSA16, respectively; Governor elections are denoted with GOV, United States House (congressional) races with USH, Presidential races with PRE, Secretary of State with SOS, and United States Senate with USS.

As a second test for the Firewall, we return to analyzing only the voting data for the General Assembly, and adopt the uniform partisan swing hypothesis to test the effect of how the ensemble and Act 43 plans will behave under a variety of statewide partisan vote fractions.  We test the voting data over the 2012, 2014 and 2016 data, and analyze the projected number of elected Republicans when the statewide Republican vote fraction ranges from 45-55%.

The results are nearly identical to the first test, when using data form various elections.  In all cases, the Republicans maintain their majority for significantly lower statewide vote fractions than expected.  We can also see that under the 2012 and 2016 voting data, the voting structure predicts the Republicans will gain a super majority of the seats in a typical fashion — this means that the Republicans can expect to keep the majority, while giving their party a typical chance at winning a super majority.

As an added example, we examine the 13 North Carolina congressional districts.  The labels are similar to those above, except we add the North Carolina Secretary of State (NCSS), and examine the histograms of different elections contextualized in the statewide Republican vote fraction.  Within the ensembles for each set of voting data, we also contextualize the enacted 2011 state districting plan (first used in 2012 and titled NC2012), the corrected and enacted 2016 state districting plan (NC2016), and a map drawn by a  bipartisan panel of retired North Carolina judges. 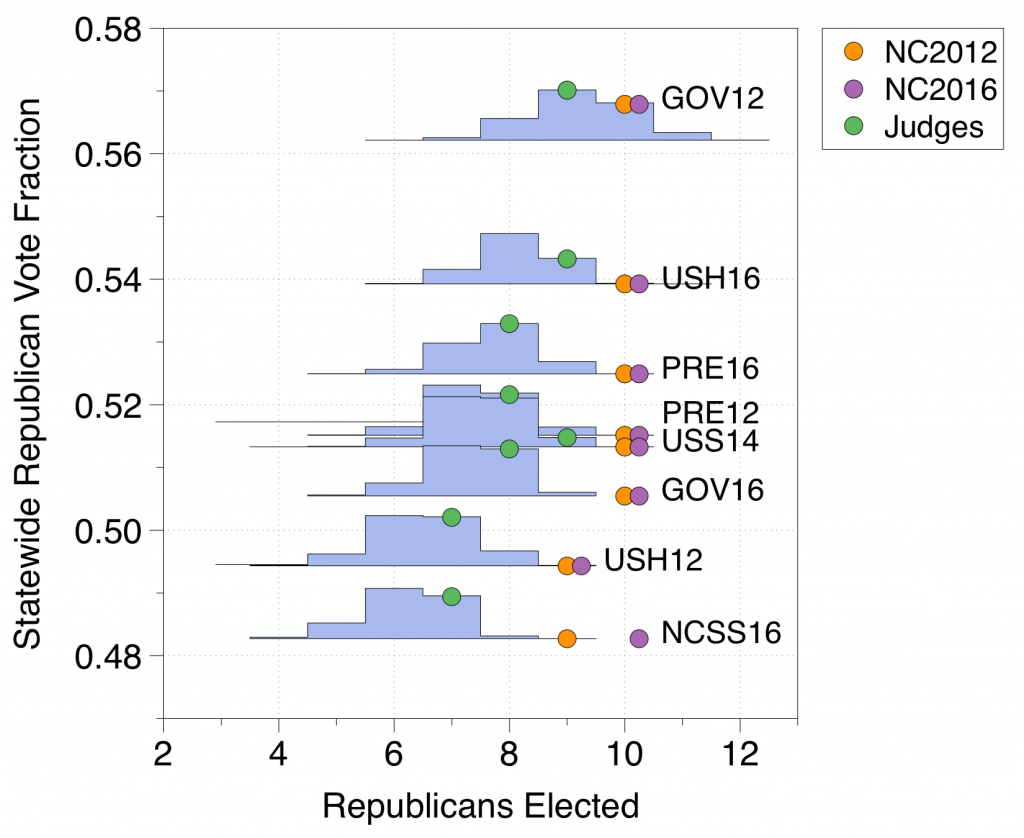 The 2012 and 2016 enacted North Carolina plans do not change their outcomes when the Republican vote fraction ranges from 50-57%; this lack of response is highly atypical when compared to the ensemble.   At a 56% Republican statewide vote fraction, the ensemble finally predicts that the two enacted plans will yield a typical result.  In contrast, the Judges’s plan closely tracks the overall behavior of the ensemble.   In this case, the effect of the Firewall for the two enacted plans is so large that there is hardly an observed region in which the enacted plans can be said to be typical.

*Note: Statewide voting data for the General assembly was imputed for uncontested races.  This is why we predict 67 seats for Act43 in the 2016 election, rather than the observed 64 seats, and why our statewide vote fractions do not precisely match reported results.  For details on this analysis, see our work on Evaluating Partisan Gerrymandering in Wisconsin.