Today the state court chose to accept the Remedial Map which the legislature produced in response to the maps we have been using since 2016 being declared an illegal gerrymander in Harper v. Lewis.

My analysis shows that the Remedial Map was much less sensitive to swings in the partisan vote fractions than the vast majority of the maps in the ensemble. The plots below, where the Remedial Plan is labeled HB 1029,  show that under a uniform swing analysis the nonpartisan maps in the ensemble often produce 6 and sometimes 7 Democratic seats in election environments when the Democrats perform well (a statewide vote fraction in the low 50%) for many sets of votes, while the 2019 Remedial Map reliably produces 5 Democratic seats in most instances. Each of the different plots uses a different set of historical votes (Labels: USS16- US Senate 2016, AG16 – Attorney General 2016, USH16 – US House 2016, GOV16 – Governor 2016).

The important feature is the atypically large jump between the 6th and 5th most Democratic district. This is the same “signature of gerrymandering” jump which we saw in Common Cause v. Rucho.  It makes the maps much less responsive to the  votes cast. They produce the same results over a large number of election scenarios. 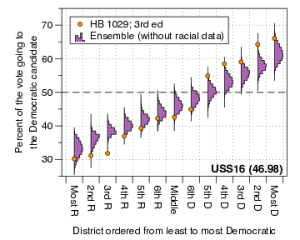 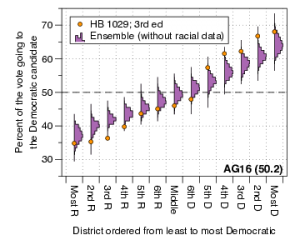 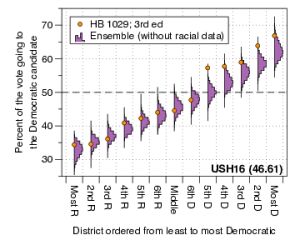 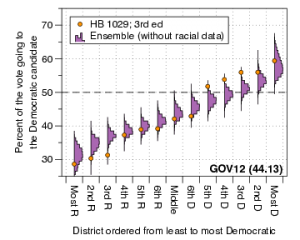 The fact that the court felt it did not have time to investigate this fully shows how the judicial pathway of preventing gerrymandering is limited. We need legislative reform. It seems the only way to ensure that the maps used in elections are responsive to shifts in the political sentiment of the electorate.

More details can be found in the report I submitted to the court which can be found here: Mattingly Nov. 26 Declaration.