Click to read about some of our recent projects: 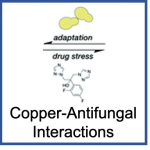 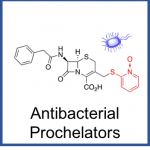 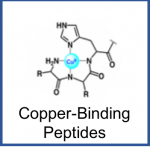 Click to read about some of our previous projects: 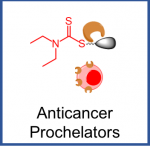 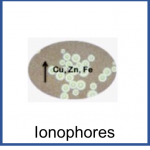 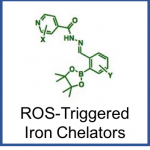 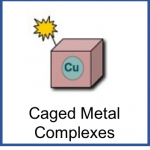 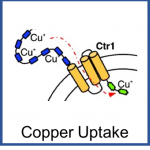 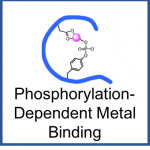 Iron, copper, zinc, and manganese are mineral nutrients that are required as catalytic and structural cofactors for numerous proteins that execute essential life processes. At the same time, these metals must be tightly controlled, as misregulation and overload of these metals can lead to oxidative stress, protein disruption, and general deleterious effects to the cell.

Research in the Franz Lab centers on elucidating the structural and functional consequences of metal ion coordination in biological systems and developing therapeutic strategies that use manipulation of metal homeostasis as a mechanism of action. We also investigatebehavior of metal coordination complexes subjected to mechanical force. Our projects explore several different areas of metallobiology:

Metals in fungal pathogens.The Franz lab has two projects at the intersection of fungal biology and metal homeostasis. In the first project, we are addressing how antifungal therapy impacts the utilization of metals by the fungal pathogen Candida albicans, and how this pathogen uses metal-specific responses to adapt to and recover from drug stress. Our second fungal project aims to characterize histatin-5, an antifungal peptide produced in the salivary glands that acts as part of the host’s innate defense system. We are exploring the mechanism by which antifungal activity of histatin-5 against C. albicans increases in the presence of copper.

Metals in bacterial pathogens.With the growing threat of antibiotic drug resistance, new antibacterial treatment strategies are urgently needed. Our lab is working to develop prodrugs that are activated by drug-resistant bacteria to release metal chelators, such as the ionophore pyrithione. We are also investigating the effects of these chelators on metal homeostasis within the bacterial cell.

Metals in polymers. The Franz Lab is also exploring metals in non-biological systems. Stretching polymers to their breaking point will eventually cause bond scission and polymer degradation. Forces below the rupture limit can induce constructive chemical changes to stress-responsive moieties, or mechanophores. The insertion of coordination complexes as mechanophores into polymer structures helps to explorehow mechanical force delivered at the molecular level can distort the coordination environment about a metal center in ways that access unique structural, electronic, and reactivity profiles.

Fungal infections are an increasing threat to human health due in part because of a rise in immunocompromised patients and invasive medical procedures. Due to a rise in drug resistant strains, new strategies are needed to circumvent this development.  It has been shown that certain antifungal drugs disrupt metal homeostasis which leads to growth inhibition. In addition, during systemic infections, one way the host defends itself is by regulating metal levels in tissues surrounding the fungal infection. While metals such as iron and zinc are sequestered by the host, the copper concentration is increased as too much can be toxic to the fungus. We propose that developing drugs that can further impact metal homeostasis of fungi may be one way to overcome drug resistance. Recent work by our group has found that treatment of the drug fluconazole elicits changes in metal concentrations and availability in the fungal pathogen Candida albicans. In addition, when fluconazole is cotreated with Cu, growth is inhibited for a longer duration than fluconazole alone. These changes force the pathogen to alter its metal homeostasis mechanisms to survive. Current work in our lab is focused on understanding the role of fluconazole and Cu in C. albicans resistance and hyphal formation. The overall goal of our work is to better understand the roles metals play in drug treatment to exploit, for the development of improved treatment options. 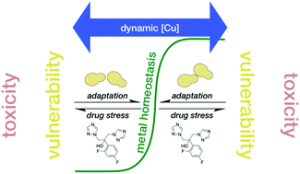 The growing threat of drug-resistant bacteria has compelled the Franz Lab to develop therapeutics with new modes of action involving metal chelation. Copper has been used as an antimicrobial agent since ancient times, and compounds with copper-binding capabilities, such as pyrithione, have demonstrated promising antimicrobial activity. However, non-specific metal chelation leads to systemic disruption of metal homeostasis and undesired side effects, limiting the use of chelators as therapeutics. A way to direct metal chelation to the desired microenvironment is the use of prochelators. Prochelators are molecules that are unable to bind metals, but can be triggered by a stimulus, such as an enzyme, to release a chelating moiety. They remain inactive until triggered, allowing them to have activity only at the site of interest. We have reported the antibacterial effects and investigated the role of copper in the mode of action of PcephPT, a prochelator triggered by β-lactamase to release pyrithione in the microenvironment of drug-resistant bacteria. We are currently continuing our investigation into the mode of action of copper and pyrithione in this prochelator strategy. We also discovered that PcephPT has inhibitory activity against NDM-1, a clinically important metallo-β-lactamase. We are developing next-generation prochelators with new modes of action and improved selectivity for bacteria with certain drug resistance profiles.

Histatins are a family of histidine-rich antimicrobial peptides that are produced in the salivary glands and act as a part of the host’s innate defense system. Histatins exhibit potent antifungal activity, specifically for the opportunistic fungal pathogen Candida albicans. These peptides are known to bind metals in vitro; however, these interactions are not well understood and their effects on the peptides’ antifungal activity are not well characterized. Our lab has shown that the antifungal activity of histatin-5 against C. albicans increases in the presence of copper. Spectroscopic methods were used to show that specific histidine residues on the peptide were responsible for the peptide’s copper binding abilities and subsequent fungicidal activity. Currently, we are working to further elucidate the mechanism of action of histatin-5 and explore how this mechanism may be affected by various metals using analytical and spectroscopic techniques and microscopy. 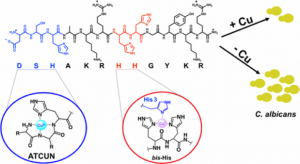 Cancer cells have been shown to have considerably different metallomes than normal cells. In particular, prostate cancer overexpresses several important copper trafficking proteins and recruits high levels of copper, making it more sensitive towards drugs like disulfiram. Our interest lies in selectively targeting this metal ion pool by developing prochelators that are activated in the cancer microenvironment. Towards this end we have developed a copper prochelator, GGTDTC, to target an aggressive prostate cancer cell line. The GGT enzyme overexpressed in prostate cancer induces release of the chelator dithiocarbamate from the prochelator, which can then form a toxic copper(II) complex. We have reported the efficacy and selectivity of the prochelator GGTDTC for prostate cancer over a prostate normal cell line. We are interested in expanding the prochelator/prodrug library with varying specificity towards different cancers and conditions with altered metal ion homeostasis like Wilson’s disease.

Iron (Fe) and copper (Cu) play important roles in C. neoformans virulence, but these metals are also potent toxins if misappropriated. Based on the need of C. neoformans to utilize and maintain tight control of these two metals for survival and virulence, we hypothesized that small molecules capable of manipulating Fe and/or Cu bioavailability may have antimicrobial activity. To investigate this possibility, we tested a panel of metal chelating agents for their ability to inhibit C. neoformans growth under a variety of metal growth environments. We also characterized chemical and physical properties of these compounds, allowing us to correlate these properties with metal-dependent antifungal activity.

A locally elevated iron load in brain regions affected by Parkinson’s disease insinuates iron as a source of cell-damaging hydroxyl radicals. While chelating agents are promising, there are significant challenges in developing agents that sequester deleterious iron without altering the distribution of healthy metal ions. Our strategy is to design pro-chelators that have little to no affinity for metal ions until a protective mask is selectively removed by hydrogen peroxide, a reactive oxygen species (ROS) that combines with iron to form hydroxyl radicals. Disease conditions therefore activate the chelating agent. In our first-generation pro-chelator shown below, a boronic ester conceals a latent phenolic oxygen that is a key donor atom of a high-affinity ligand that scavenges and incapacitates redox-active iron that is the source of OH• generation. These novel reagents will be valuable tools to test hypotheses about the role of iron in neurodegeneration and may have therapeutic potential.

In addition to protecting cells from oxidative stress, we are also interested in promoting such reactivity. For this strategy we are incorporating photolabile groups into the backbone of ligands to “cage” stable metal chelates. The inspiration for these compounds comes from the very successful caged calcium compounds that have found widespread use in studying Ca(II) in neurotransmission, muscle contraction, and other biological processes. We are interested in caging transition metal ions and taking advantage of their change in reactivity post-photolysis. Activation with UV light induces bond cleavage and release of metal complexes that are both more bioavailable and reactive toward ROS, as shown in cartoon form in the adjacent figure. These new reagents will be valuable tools for on-demand delivery of metal ions to study mechanisms of metal ion trafficking, as well as applications such as chemotherapy where toxic metal ions can be released to induce cell death.

Copper is required in virtually all cell types from bacteria to humans, and cells have elaborate systems for its uptake, transport, and distribution. In order to elucidate the molecular mechanisms by which cells acquire copper, we are investigating the copper binding interactions of peptide sequences found on the extracellular region of high-affinity copper transport proteins in the Ctr family. The unique feature of the extracellular region is the presence of methionine-rich domains arranged as MXXM or MXM motifs containing 3–5 methionine residues per “Mets” motif. We use peptide synthesis to create a series of MX2MX2M peptides and investigate their copper-binding properties by mass spectrometry, UV-vis spectroscopy and cyclic voltammetry. The Mets peptides bind selectively to Cu(I) with impressive affinity. Removing even one of the methionine residues abolishes this capability and establishes the MX2MX2M motif as a Cu(I) binding domain. 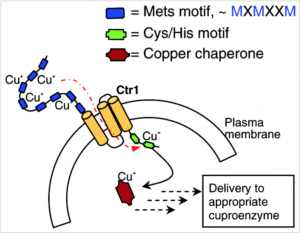 Proteins often bind metal ions by using the oxygen, nitrogen, or sulfur-containing functional groups of the amino acids that make up the protein. A protein’s complexity increases, however, by the action of enzymes that chemically modify specific amino acids, for example by adding a phosphate group. We are interested in understanding how protein phosphorylation changes a protein’s affinity for metal ions and how such phosphoprotein-metal complexes consequently alter protein conformation, as shown schematically below.

By using Tb3+ as a luminescent probe, we demonstrated that the phosphorylation state of a 14-residue peptide fragment of a-synuclein, a protein implicated in Parkinson’s disease, dramatically affects the metal ion affinity of the peptide. Whereas the unphosphorylated peptide and its phosphoserine analogue show weak Tb3+ binding, the phosphotyrosine analogue shows tight 1:1 binding as well as 2:1 and 3:1 Tb:peptide adducts. Our data suggest that the phosphorylated amino acid must be appropriately positioned among additional ligating residues to establish this phosphorylation-dependent metal binding.

A full listing of publications for Katherine Franz can be found on our Publications page and on her faculty profile page.  (Click on the “Journal Articles” tab at the bottom of the page.)