There are many negatives social impacts in the apparel industry with rising consumption, low cost apparel and the shift to offshore productions in developing countries. These negative impacts occur throughout the supply chain. Labor abuse is a huge issue within the apparel industry. The workers are exposed to poor working conditions, low wages and long hours of work. These harsh conditions of labor within the apparel industry have been considered as a form of slavery. On April 24, 2013 one of the deadliest worker’s incident occurred in Bangladesh when an eight store building completely collapsed. This collapse is now known as the Rana Plaza; within the building there were five clothing factories that had been making cheap clothes quietly for years. In total, 1,138 workers died and over 2,500 were injured. In 2012, outside Dhaka there was also a Tazreen factory fire that killed 112 people working in the apparel factory. These different disasters have raised awareness on the poor factory conditions within the apparel industry and a few companies like Walt Disney reacted by taking their production out of Bangladesh.

Child labor is also a major issue within the apparel industry; the International Labor Organization estimates there are around 170 million children involved in child labor in the apparel industry in order to meet the demanding production needs of the U.S and EU. Although is has declined by 30 percent from 2000 and 2012, it is still a major issue that is depriving  children from school.

Working conditions in Asian countries are no better. The protests and strikes within these countries have been fairly unsuccessful with only a slight increase in minimum wage which is nowhere near living wage. The Asian countries have sweatshops conditions that include long hours every day, sometimes without rest days and they are often not paid when working overtime. In addition, there are unsafe hazardous working conditions. Often the factories were adaptations of buildings for other purposes without required permits. The buildings are often added onto by adding more floors to fit more workers; this makes the building overcrowded and dangerous. There are often fire hazards, lack of protective equipment and outdated wiring and structures increasing the number of accidents and deaths. Within these poorer, developing countries there is lack of contracts that protect the workers who may be injured. Many of these factory workers receive no compensations because they may be working illegally or are not registered workers so they do not quality for compensation.

The structure of global garment production continues to shift as new low wage factories enter the market. It has become common place for western companies to shift factories and even countries with very little notice meaning that workers cannot be given long term contracts and are frequently treated as temporary workers or laid off. ‘We are never sure of whether the next order will be coming. You cannot therefore engage people on a regular basis when you are not sure that there will be work’ Oxfam (2004) Temporary workers often do not receiving the same benefits as permanent employees such as health insurance and holiday pay. Some factories are moving towards employing more workers on a temporary basis to avoid being locked in to a permanent contract – this means the workers have little job security. 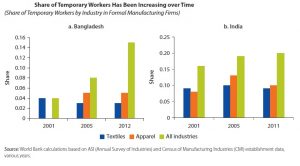 Some actual experiences from workers include: