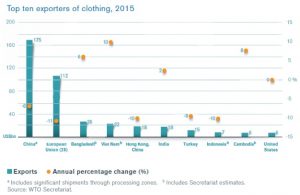 The manufacturing segment of the apparel industry is very concentrated in terms of companies within a number of countries, thus a country based comparison is more useful than a firm based comparison. Within these countries, the industry consists of several thousand small or mid-sized apparel manufacturing companies as well as informal producers of apparel. The productions bases for apparel is mainly concentrated in three main regions in Asia, which are China, the South East Asia Region Benchmark Countries (SEAB) and the South Asia Region (SAR). The SEAB region includes Viet Nam, Indonesia and Cambodia, whereas the SAR region includes Bangladesh, India, Pakistan and Sri Lanka. In general, the core competencies that these countries lie in the production of apparel in large scale, by leveraging cheap labor force present within the country.

Over the years there has not been a significant change in the majority of the Apparel GVC structure, although there has been a trend of where the different parts of the GVC is situated. However, if new form of apparel such as wearable technologies, or 3D printed apparel gains more popularity, there would be a significant change in the apparel industry structure as well as its geography. You can find more information on the geographical distribution and the trade patterns across the different nations in the International Trade Patterns: The Shifting Geography of Global Industries page.

The table above displays the total apparel export of top 10 countries in 2015, as well as their market shares from 1980 to 2015 in 10 year increments, along with their annual percentage change. China maintained its position as the leader of the industry throughout the years, increasing its market share by almost 10 times in a time frame of 35 years, and captured most of the value from the increasing global market for apparel. Most of the other developing countries generally followed a similar pattern in terms of increasing their market share of the apparel export industry, although not as successfully as China. China’s has the ability to produce a diverse range of apparel in very large scale and with such productivity that has become its core competency that allows it to be more competitive than the others.

The increase of market share of the developing countries was stimulated after 1994, when the World Trade Organization’s (WTO) Agreement on Textiles and Clothing (ATC) mandated phase out of import quotas sanctioned for decades under agreements such as the 1974 Multi Fiber Arrangement (MFA), details of which you can find in our Political Timeline Page. Since a significant amount of import quotas and tariffs were removed, the developing nations with lower labor cost started getting an edge over their developed competitors. We can see a trend of offshoring and job shift galvanized by this, as detailed in our Offshoring of Production and Global Job Shifts page. Another general trend in the industry, as the table below suggests, the price of apparel generally rose and there was an overall shift into lower-priced products. The net result was a drop in overall apparel prices. 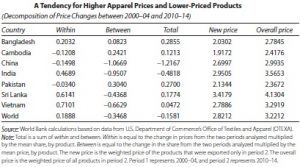 Although the developing countries have a significant edge over developed countries in the labor intensive apparel industry because of how considerably cheaper labor is in the developing nations, there is still portion of apparel export done by the European Union(EU) countries such as France, Germany, and Italy. This is done through the export of high-end fashion apparels that these European countries are known for, for example- Versace, Prada, Armani, etc. based in Italy; Coco Chanel, Hermes, Luis Vuitton, etc. based in France, and Adidas, PUMA, Hugo Boss, etc. based in Germany, which allows them to sell their products at a premium price. Much of this export are imported from a country with lower labor costs, and then re-exported at a premium price, thus making them a value-added trader of apparel. You can learn more about this in the Key Industry Players in Design, Marketing and Sales page.