What materials does it take to create a pair of blue jeans? The simple answer is way too much: it takes cotton, water (lots and lots of it), toxic and corrosive chemicals (including PFCs, detergents, dyes, and alkylphenol ethoxylate), gasoline (to fuel equipment and transportation), and plastics (to preserve the jeans during transport and storage). While this may seem to highlight the extensive environmental impact the apparel industry on the globe, it does not even begin to scratch the surface. In total, one and a half billion pairs of jeans are are created in Bangladesh every year, and jeans comprise just a small fraction of total apparel sales at any given time (Singer, 2015). There is no question that the apparel industry has a negative impact on the environment, and while the world has started to catch on, there’s been little change for good. 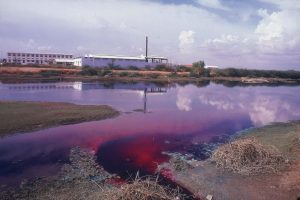 The apparel industry is the second largest polluting industry in the world (behind the oil industry) (Fisher, 2015), however one would be hard pressed to find environmental laws pertaining directly to the apparel industry. There are a number of reasons why this is. First and foremost, the developing countries in which the majority of apparel is created have neither the means nor the desire to regulate the environmental impact. Unlike developed countries such as the US’s Environmental Protection Agency and the EU’s European Environmental Agencies, countries such as India, Bangladesh, and Vietnam do not have the organizational structure in place to hold apparel manufacturers accountable for pollution. Even if they did, it’s unlike they would be effective; these industries thrive because of the ability to undercut production costs in developed countries. Increasing regulation would force these firms to restructure their production methods and likely drive costs up (Szokan, 2016)

As such, the onus is on retailers to reel in their suppliers and encourage environmentally sound practices. However, sinces supply chains are so extensive, it can be difficult for suppliers to track and assess day-to-day supplier operations. In turn, many retailers stand idly by. While several expressing a desire for consumer to recycle old clothing (through passing down/donations), internally this presents a conflict of interest: recycling hurts their revenue stream (Claudio, 2007). The United States government – an unconflicted third party – has stepped in to improve and incentivise recycling efforts. Knowing they cannot trust retailers and suppliers (who have left the US in droves to skirt regulation) it does so by giving tax breaks directly to consumers. Donating used clothing to organizations like Goodwill and Salvation Army carries tax incentives for US citizens. The idea is that incentivising US consumers (who amount to the greatest importing body of apparel items) to donate clothes rather than throw them out will decrease total demand of new clothing – in turn cutting down environmental damage (Cline, 2012).

Because environmental regulation is low in developing countries, it is still relatively easy to build up supply capabilities so long as one has the capital to do so. Where there is significant barriers to entry is in the United States and the EU. In particular, the United States EPA’s Resource Conservation and Recovery Act (RCRA) has accelerated the rate at which apparel manufacturers have left the US. This act is a noble one – it outlines the extensive fines and penalties offenders receive for excessive dumping materials and chemicals into lakes and streams with the ultimate goal of protecting both wildlife and local communities . Since its introduction in 1976, streams and waterways near manufacturing plants in the United States have shown marked decreases in hazardous pollutants (EPA, 2016). The same cannot be said for many developing countries. Bangladesh, in particular, suffers because it is so easy for manufacturers to set up shop. Two of the country’s food staples – fish and rice – are being decimated by toxic apparel chemicals, turning the water a wide variety of colors and killing off crops and wildlife (Yardley, 2013).

At this point, environmental rules and regulations for the apparel industry are in their infancy. Some industry experts fear the appropriate regulations may never come, as manufacturers will continue to relocate to states whose regulations permit them to produce at the lowest cost, even if environmental cost is high. Though distressing, this fact has driven movements for good. The Copenhagen Fashion Summit – a yearly summit first held in 2011 – attempts to address these issues head-on. This summit, attended by over a thousand decision makers and thought leaders from 34 different countries, revolves around sustainability awareness. Targeting youth has been its key tenant, with speakers often preaching that the next generation of students and young designers will have the greatest opportunity to bring about real change. Youth – especially in Europe – have caught on; industry icons including Mark Langer (CEO of Hugo Boss), Amber Valletta (Actress/Model), Princess Mary of Denmark, and Vanessa Friedman (Chief Fashion Critic at the New York Times) have spoken directly to these young individuals and they are hopeful their messages have resonated with them (Ladd, 2016). While there certainly is not better time for change than now, the apparel industry is unlikely to see real environmental improvement until the next generation takes the stage.