Offshoring has been taking place in the apparel industry for a long time. There are many advantages to offshoring in the apparel industry. Some of these advantages include lower costs of labor, material sourcing and country specialty. Most retail companies offshore low quality production jobs and merchandising to three main areas: China, Southeast Asia regions and South Asia regions. Due to its large scaling capabilities as well as high productivity, China has advanced very quickly within the apparel industry and has become a top country to offshore to for production. However in the future, China, in particular, may be less ideal manufacturers because of its rising labor costs. If the benefits of the increased cost competitiveness in countries like Bangladesh, Sri Lanka, Vietnam, etc. coupled with their efforts to diversify their apparel products outpaces the higher productivity and product diversity offered by China, a significant amount offshoring might occur in the future, resulting a shift in apparel jobs from China to these countries .

We can trace back to the 1970’s, when the MFA was imposed, to see examples of offshoring in the apparel industry. In order to maintain the competitiveness of domestic apparel manufacturing companies, US and EU put in place the MFA that caused big producers like China, South Korea, Taiwan and Hong Kong to face high tariffs and set quotas from the U.S and EU. At that point, no significant apparel manufacturing was present in neither the South Asia region, nor the South East Asian Region. When these big manufacturing countries reached the maximum levels of their quota, they started branching out to neighboring countries with unused quota for apparel export, and established factories in order to continue production. This was another round of offshoring that led to the creation of the apparel manufacturing hubs in the South Asian and the South East Asian region.

In recent years, as China’s wages were continues to rise, and China moves towards more high value products and generate jobs that require greater skills, equipment and technology, another round of offshoring is expected, as these jobs move from the country to the South Asia and the South East Asia regions. 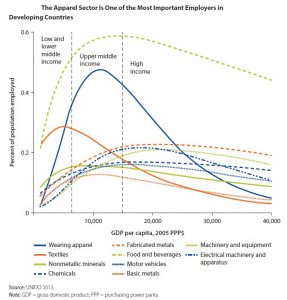 The $450 billion global apparel industry is one of the most important industries in the world for the economy because it creates numerous jobs. However, the working conditions are below standards with long hours, low wages and issues with safety and health. For example, Bangladesh is a major exporter of apparel; 80 percent of its total export being from this industry. However, the workers in Bangladesh have the lowest minimum wage in the world making around $68 dollars a month compared to Chinese workers making around $230 a month. Wages within these apparel factories are very lower compared to American apparel factory workers who make around $1, 600 a month. 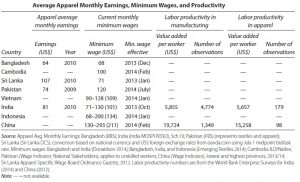 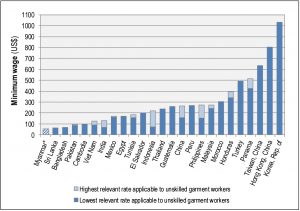