Trade policies have played a significant role in shaping the global value chain of apparel as we see it now, as well as how competitive the countries are within the industry. The international fragmentation of the apparel supply chain had significant contributions from trade restrictions, such the the ones imposed by the Multi Fibre Agreement (MFA)/ Agreement on Textiles and Clothing (ATC). These systems were imposed by the US and the EU to protect their domestic industries by limiting imports from highly competitive suppliers such as Hong Kong, South Korea, and later China. When these countries reached their maximum levels under the quota system, they set up factories in nearby countries that had unused export quotas, such as Bangladesh, Sri Lanka, Viet Nam, etc.

After the MFA was phased out in the 1990’s, the developed nations with high labor costs could no longer compete with its Asian counterparts, and coupled with the economic crisis in 2008-2009, significant amount of consolidation with the manufacturing end of the apparel industry took place. A limited number of large apparel exporters survived such as China and Bangladesh, cutting out smaller exporters such as US, Thailand, Mexico, etc. Around 2001, countries which were least industrialized were given preferential end market access through the “Everything But Arms(EBA)” and “Generalized Scheme of Preferences (GSP)” which allowed Least Developed Countries (LDC)s to export to EU, etc. without any tariff. This is a good example of how trade policies were utilized to help some countries be more competitive and thus shape the global industry dynamics.

Along with trade agreements, governmental policies on imports and tariffs significantly effects how a country fares in the global apparel industry. Several governments have reduced import taxes on textiles for apparel production, allowing countries to diversify the type of materials used, as well as setting up Export Processing Zones(EPZs), bonded warehouses, duty drawbacks, cash subsidies, etc.  to make the process of export smoother. China, the largest exporter of apparel, also constructed specialized supply chain cities for apparel, which significantly influenced how competitive it became. 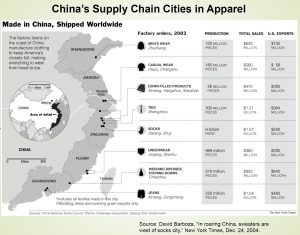