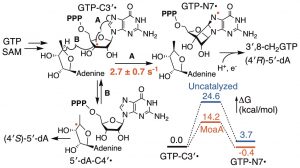 Haoran and Edward’s work on the catalytic mechanism of MoaA was published in JACS. MoaA catalyzes the first step in the molybdenum cofactor biosynthesis; a unique radical cyclization of guanosine 5’-triphosphate. In this work, Edward initially found an accumulation of a unique radical species, 5′-deoxyadenos-4′-yl radical, and Haoran kinetically characterized it and came up with the mechanistic model, which revealed the rate constants of the radical cyclization step for the first time. Moreover, Haoran initiated a collaboration with Pan Zhang in the Weitao Yang lab in the Chemistry Department to demonstrate that MoaA accelerates the radical C-C bond formation by 6-9 orders of magnitudes by constraining the radical conformation and stabilizing the transition state by the Arg17 residue. Together, the study revealed the first evidence that a radical SAM enzyme accelerates radical chemistry using its unique active site environment. The study also revealed the function of Arg17 whose mutation is known to cause Moco deficiency disease in humans. Congratulations to everyone.