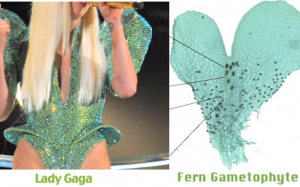 Read about it in DukeToday

Also, a YouTube video of Lady Gaga’s performance at the 2010 Grammys, which helped inspire this naming honor, may be found HERE

Lady Gaga was honored by Duke University biologists. Kathleen Pryer and colleagues named a new genus of ferns found in Central and South America, Mexico, Arizona and Texas after the pop music megastar. A genus is a group of closely related species; in this case, 19 species of ferns will carry the name Gaga. At one stage of its life, the new genus Gaga has fluid definitions of gender and bears a striking resemblance to one of Gaga’s famous costumes. Members of the new genus also bear a distinct DNA sequence spelling GAGA.