The presence of microplastics in marine environments is a growing problem as the production of plastic is continually increasing, and much of what is manufactured breaks down––or is already small–– and finds its way to the ocean. These microplastics are often mistaken for food, and as it travels up the food web, so does its toxicity and the harm it transfers from species to species. Researchers at the Duke Marine Lab (DUML) have found that sea anemones have a taste for these plastics. In order to investigate anemone taste preferences, students at East

On Day 1 of their experiment, the AP Environmental Science students made predictions about whether styrofoam, marine debris, plastic bags, or plastic pellets would be preferred by the anemones. They practiced their tests by selecting one of the various plastics and holding it near the tentacles of the anemones to see if they would attach to and/or ingest it. After some trial and error, the students came up with the best method so that the process would be standardized across the class, and results would not differ from student to student. They also found that one of the plastics needed to be a little smaller in order for the experiment to work. This step was crucial to working out all the kinks so that data could be collected the following day. One point that we really wanted to emphasize with them is that science cannot happen without failure. In order to learn what does work, we often must first learn what does not.

On Day 2, the young researchers used their honed skills to run their tests and gather the numbers for each type of plastic. They used this data on Day 3 as they came up with the percentage of attachment, percentage of ingestion, and average retention time for each plastic. In addition to each group’s calculations, they came together as a whole to find the class averages for each category and each plastic. This was important as it allowed students to compare and contrast anemone preference. Students could also hypothesize about explanations. It was great to listen in on the student’s thought processes and all of the creative reasons there might be for one type of plastic to be ingested and held longer than another.

This project connects local students to DUML research and our changing marine habitat. It’s so exciting and encouraging to see high school student scientists interested in environmental research and interested in making a change themselves. After seeing the effect that plastic had on marine organisms firsthand, one ECHS student said it best:

“The enemy of the anemone is my enemy.”

Scroll through some of the amazing ECHS presentations:

Last week of community outreach in 2022 ✅ Thanks

We spent the day with grade five from Bogue Sound

First week of fall outreach in the books ✅ Thank

Our team is starting off Earth Day celebrations wi

Thank you for participating in SeaAScientist, Greg

Another great teacher workshop in the books! Thank

Calling all Duke undergrads! Join @dumlcommunity for a summer of service @dukemarinelab! Support local conservation and community organizations on the coast and make a difference! 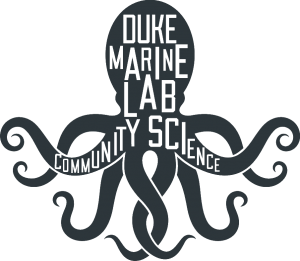