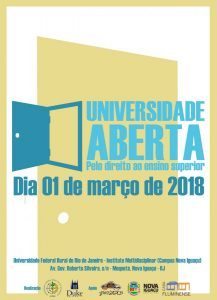 Students from Duke University and the Federal Rural University of Rio de Janeiro (UFRRJ) continue to reflect on the UFRRJ’s “Open University” conference held on March 1, 2018 in the city of  Nova Iguaçu. The event brought together 160 elementary, high school, and university students, professors, government officials, and community members.

In the opening panel, UFRRJ’s dean of research and graduate studies, Alexandre Fortes discussed the need for this event in terms of education’s benefit to Nova Iguacu’s community and the threats to higher education at the local, state, and national level. Duke professor John D. French called teachers the “heroes of democracy” and noted that the educational challenges facing Brazil’s educators make up part of a larger worldwide trend and struggle.Alexsandro Costa Castellar, Nova Iguacu’s secretary of  education, planning, and strategic affairs discussed his own trajectory and the need for students to continue to fight for their seat at the table. Juarez Barroso Ferreira,  Nova Iguacu’s secretary of culture, discussed the drop-off in student participation between high school and university, saying students often cannot make the sacrifices necessary to attend university and  grow tired of academic pressures and lacking resources after nine years in public schools.

During the second panel, Jocelene Ignacio and Dudu de Morro discussed culture and identity in Nova Iguacu. Ignacio talked about the college entrance exam prep course and her involvement and affiliation with the Catholic Church in the 1990s. Dudu discussed the importance of remaining rooted in one’s community. He revealed that his chosen name “do Morro Agudo” constantly reminded him of his often-overlooked and stigmatized neighborhood. Dudu asked the students “if everyone distances themselves, how will people give back to the community?”

In the afternoon, the conference shifted to individual workshops outside of the glare of the auditorium stage and  recording cameras. They involved workshops introducing the university, talking about the state of Brazilian education, and creative writing. Luana Lima da Silva wrote about the conference’s overarching goal of “raising the consciousness” of students, especially at the elementary school level, regarding the threats facing higher education, symbolized by the temporary and permanent closure in recent times of even prestigious universities such as the State University of Rio de Janeiro (UERJ). They discussed how these threats could close off future avenues of social advancement for these future students. She argued that inviting these students to the one-day conference and workshop “brought these worlds closer” and allowed students to develop “a sense of belonging” to the university space. She spoke specifically about the round-table discussion “Right to Higher Education: A Matter of Struggle and Resistance”. The workshop, conducted by university students from the Baixada itself, and divided equally between male and female students, addressed the experiences and difficulties of these students in accessing higher education. These difficulties can include practical matters such as access to food, transport, technology, and adequate financing. More abstract challenges can also include adjustment to a different curriculum, set of assumptions, and cultural focuses which may differ from said student’s expectations or background.  The workshop opened by each instructor introducing themselves, detailing their academic trajectory, where they lived, and their profession. After an initial awkward silence, the group discussed “myths” about higher education, making friends at the university, and the college entrance test, ENEM. They also discussed educational resources at the Multi-Disciplinary Institute (IM/UFRRJ) such as the library and the IM’s college prep course, Pré-Enem Éthos.

As Lima pointed out, through the workshop, the public school students discussed the challenges that they shared with  aspiring and current university students, such as the competitive atmosphere created by the small number of university slots and parents’ unenthusiastic support for pursuing a university degree. Learning about mutual struggles  expanded these students’ horizons of possibility. Some students expressed interests in military service and a Medicine degree. The day ended with poetry, musical performances, and a vocational test for the aspiring students to give them an idea  of potential careers to pursue. Yago Valle, an organizer of the workshop said the workshop participants “used our time to the maximum.” He felt “surprised” by the students’ engagement and “filled with hope” for their potential to carry on the necessary change in Brazilian society.

Carla Castanha, an organizer of the conference, undergraduate in  Letters and Literature, wrote that despite the “marathon” of work and the unforeseen logistical issues that inevitably arise with the conference, she felt “gratified” when reflecting upon the experience. “We offered these young people an opportunity that I did not have in my town [as an applicant].” She said the conference proved successful in showing the “how transforming and empowering university life can be” adding that she “felt in many of them the satisfaction and joy of being there.” She also credited the institutional partnership between Duke and the UFRRJ for the success of the conference and the Cost of Opportunity project in general, saying she learned academically, professionally, and personally “from the very first day” of the project. As a Duke undergraduate, I noted that the young students took an interest in the Rural’s informational pamphlets and the university’s computer access. They also wondered why, as foreigner, I “came to the Baixada!?” This last question highlighted the continuing internalized regional sigma and, therefore, the importance of the event in highlighting educational resources within the Baixada.