Gray F. Kidd, packet for the teaching of African and Afro-Brazilian history in Brazil (June 2016) 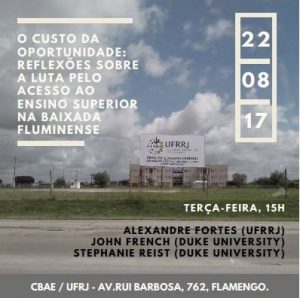 As part of their Bass Connections project team, The Cost of Opportunity? Higher Education in the Baixada Fluminense,

Professor John French and graduate student Stephanie Reist participated in an event in Rio de Janeiro on  August 28, 2017. Joining them was Alexandre Fortes, professor of history at the Federal Rural University of Rio de Janeiro (UFRRJ) and coordinator of the Brazilian team. This presentation is a return trip for the team, which gave a presentation to the same institute on September 22, 2016.