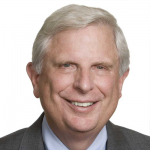 Chuck served two years on active duty as an officer in the U.S. Navy, achieving the rank of captain in his subsequent Naval Reserve service.  He served as senior warden of the Christ Episcopal Church Vestry, the board of trustees of St. Timothy’s School, president of the Occoneechee Council of the Boy Scouts of America and president of the Rex Hospital Foundation.  He is past chairman of the Triangle Land Conservancy and is on the boards of the School of Government Foundation, UNC Chapel Hill, the North Carolina Free Enterprise Foundation and the Dix Visionaries, a group dedicated to the preservation of the grounds of the Dorothea Dix Hospital as a destination park.  He is a member of the Fourth Circuit Judicial Conference.