We are presenting at CNS Virtual 2020! Check out our poster here. 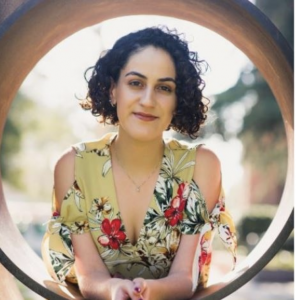 Mariam is featured on the Duke Neurology Staff Spotlight newsletter. To read more about her responsibilities as an RA in the lab and how she came to the cognitive sciences, click here. 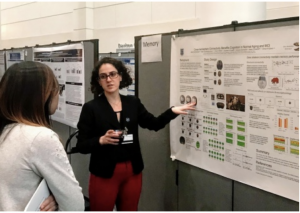 Mariam presents her work at the Neurology Translational Brain Sciences poster session on a simultaneous TMS EEG project examining cross hemispheric connectivity and its benefits for cognition in healthy older adults and those with mild cognitive impairment. For the full story, read here. 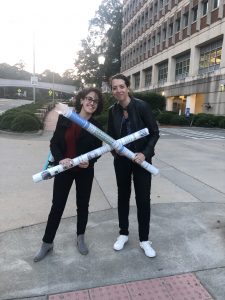 Mariam Hovhannisyan and Lysianne Beynel present their posters on brain stimulation and working memory at the 2019 Carolina Neurostimulation Conference in Chapel Hill, NC. 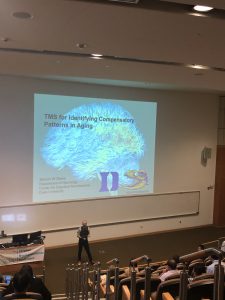 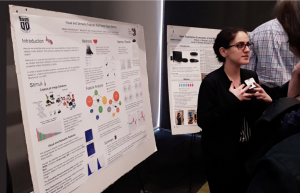 Electric Dinolab member Mariam Hovhannisyan wins the 2nd places poster award at the North Carolina Cognition Conference this week for her work on the visual and semantic determinants of object memory. Her poster, “Visual and Semantic Features that Predict Object Memory”, examined the role of feature distinctiveness in an online memory experiment, and has important implications for how we think about how these kinds of information interact to form lasting memories.

Brain stimulation delivered to the dorsolateral prefrontal cortex modulates memory representations in distant subcortical sites, and can have clear influences on memory behaviors. In a new study published in Cognitive Neuroscience, we applied 5Hz rTMS before an associative memory task, while brain activity collected with fMRI. An encoding-retrieval similarity (ERS) analysis, which evaluates how well memories are reinstated after a delay, showed that excitatory 5Hz TMS (based on local activity) increased this reinstatement, compared to an inhibitory 1Hz TMS session. 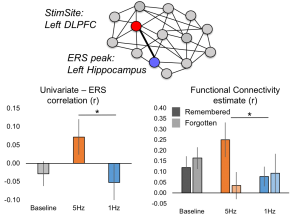 This finding is interesting for purely methodological reasons and advances our understand of what TMS does to memory representations. However, the story becomes more interesting when we consider two mechanistic predictions based on this observation. First, if TMS to DLPFC is going to affect subcortical storage of representational info, we would expect that the greater activity at the stimulation site (i.e., an “excitatory” effect) should correlate with greater ERS in MTL. Furthermore, if this communication between distant regions is important, then the functional connectivity between these regions was greater for remembered than forgotten trials. This is what we found.These results provide the first evidence of rTMS modulating semantic representations and strengthen the idea that rTMS may affect the reinstatement of previously experienced events in upstream regions.

A new Electric Dinolab study in Network Neuroscience combines two important connectivity metrics to help explain age-related changes in memory performance. We made a tool for combining structural and functional connectome information in canonical white matter fiber systems like the fornix or uncinate fasciculus. We then found that these combined connectivity metrics help to explain memory deficits in older adults.

This study shows how combined measures of network connectivity have greater explanatory power than any single measure or region, and point to a greater reliance on both structural and functional support in older adults. And the tool is freely available on our githib, so feel free to try it out on your own data! 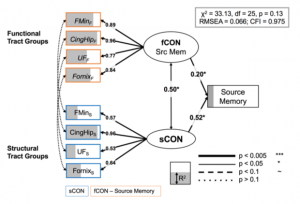 We found that 10 minutes of 5Hz rTMS, relative to 1Hz, had multiple effects on neural representations: 1) greater RSA during both encoding and retrieval, 2) greater ERS across all items, and, critically, 3) increasing ERS in MTL with increasing univariate activity in DLPFC, and greater functional connectivity for hits than misses between these regions.These results provide the first evidence of rTMS enhancing semantic representations and strengthen the idea that rTMS may affect the reinstatement of previously experienced events in upstream regions.

Local kid makes good at SACNAS (Society for Advancement of Chicanos/Hispanics and Native Americans in Science) 2017, where Eddie won the “Undergraduate Student Presentation Award” in the category of “Life Science: Neuroscience” for his poster entitled Changes in the Brain’s Structural Scaffold over Time: Implications for the Development of Major Depressive Disorder in Adolescents. This presentation, a collaboration with Doug Williamson and the Translational Center for Stress-Related Disorders in the Department of Psychiatry and Behavioral Sciences, described a preliminary analysis of the structural connectomes of adolescent subjects in the Teen Alcohol Outcomes Study (TAOS), and showed typical growing and pruning mechanisms consistent with structural brain rewiring that normally occurs as a part of adolescence. Future studies will attempt to predict how these structural changes help to predict familial risk for depression, exposure to stress, and other neuropsychiatric outcomes. Great job Eddie! Brain halves increase communication to compensate for aging, study finds
Increased communication between distant brain regions helps older adults compensate for the negative aspects of aging, according to a new study by Simon Davis, PhD, and colleagues. While increased bilateral communication during aging has been observed before, it has not been clear whether this phenomena is helpful or harmful, and no study has directly manipulated this effect, until now. “This study provides an explicit test of some controversial ideas about how the brain reorganizes as we age,” Davis said. Read more. 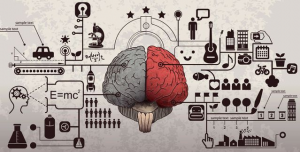